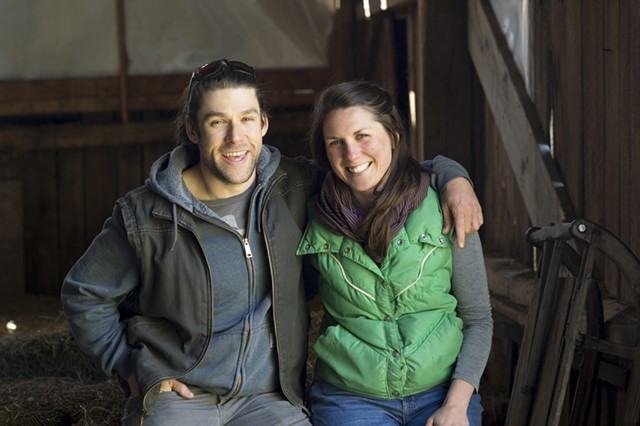 Kate Turcotte and her husband, Zack Munzer, have reluctantly given up their effort of more than three years to establish Orb Weaver Creamery as the second-generation farmstead cheesemaking operation on Orb Weaver Farm in New Haven.

Married couple Marian Pollack and Marjorie Susman, who own the farm, blazed the trail as the first generation of Orb Weaver cheesemakers. They will continue to live in the farmhouse on the 101-acre property, as they have for more than 40 years, and run their seasonal vegetable operation there. A neighboring farmer will graze Texas Longhorn cattle on the pastures, Susman said by phone.

In a phone interview, Turcotte confirmed that Orb Weaver Creamery's last remaining cow went to a new home the week of February 21. The couple will sell their remaining cheese inventory before closing the business for good. “We had one cow left, and she was just giving us this look, like, Why?” Turcotte said with a rueful chuckle.

Turcotte said a combination of factors led to the decision, but the couple's fruitless, multiyear search for an affordable home close to the farm was a major reason. Turcotte and Munzer had a daughter in June 2021, and the "basically one-room” house they were renting a quarter-mile down the road from Orb Weaver Farm was too small for the growing family.

Pandemic-inflated real estate prices only made the young couple's quest for a home feel more futile. “We just kind of realized that, with the size business that we were operating, we wouldn't be able to afford to buy the farm and buy a house, so we had to choose one or the other,” Turcotte said.

To qualify for a mortgage, Turcotte said, she and Munzer have been juggling care of their daughter with running the cheese business and holding down full-time jobs.

“We’ve been on a waiting list for daycares with no real end in sight,” she said, noting that she works days and her husband, nights.

“Burnout is a big piece of this as well,” Turcotte said.

When Turcotte and Munzer established Orb Weaver Creamery, their goal was to build on the existing Orb Weaver cheese brand created by Pollack and Susman with a new, separate business entity. In 2018, after more than two years of relationship building and business planning, the two couples finalized a three-year lease on the farm and its on-site cheese facility.

Pioneering Cheesemakers Orb Weaver Transition Their Farm
By Melissa Pasanen
Food + Drink Features
By the end of the lease, the younger couple hoped to have found a home nearby and to be in a position to buy the conserved farm at its agricultural value. All parties understood that Pollack and Susman would stay in the farmhouse and keep running their vegetable operation. “Marjorie and Marian did everything they could to help set us up for success,” Turcotte said. “All they wanted to do was just retire in the house and keep farming their vegetables — and they have every right to do that.”

Turcotte has worked as a cheesemaker for 16 years; her husband has held farming jobs for a similar time span. The couple is passionate about small-scale, sustainable agriculture, and it's more important for them to stay in the area.

“Whatever jobs help us do that will probably be what we will do,” Turcotte said.

Susman said that she and Pollack may rent their cheese room to another cheesemaker, but they will not share the Orb Weaver name again.

"They’ll have to come in with their own name,” she said.