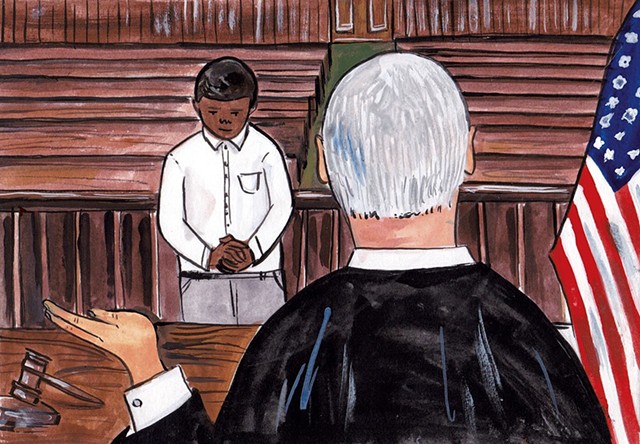 Kareem G. Louard was driving under the influence of alcohol and weed. He was driving with a suspended license, due to a 2015 DUI charge. Thanks to some possibly extenuating circumstances, Louard’s public defender, Lucas Collins, worked out a pretty good plea deal. Then Chittenden Superior Court Judge Gregory Rainville dropped the charges and let Louard go.

Those are the facts, as reported here. But this is the most pertinent fact, the one no one will utter: Rainville let Louard go because he is an African American.

The decision was a perfect example of what speechwriter Michael Gerson called the “soft bigotry of low expectations.” Collins, who like the judge is white, exhibited his own racial chauvinism.

Herewith, text and subtext (in italics):

Collins: "My client, to his credit, behaved very well, was very compliant, was polite.” (My client was a credit to his race.)

“[He] did not give them any trouble." (Now, you’re not going to give us any trouble, are you? Imagine this sentence emanating from the mouth of a Southern cop addressing a black man on a lonely road in Mississippi, circa 1965.)

Rainville: "You're a black man.” (You are categorically different from other motorists).

“This could have gone really bad, really quick if you had gotten your back up about this or gotten upset or just got overly excited.” (Being black, your emotions are easily excited, and you have a hard time controlling them.)

“You'd probably have gotten hurt, and they might have as well.” (If someone had gotten hurt, it would have been your fault.)

“So I think you deserve a break here. You're done." (That’s a good boy. Now run along home.)

The Burlington police, according to Chief Brandon del Pozo, are working on “creating better bonds” between cops and young black men. Start with this: the 14th Amendment, which guarantees all Americans, including African Americans and former slaves, equal protection of the law.