Opinion: Can a Democrat Be a Revolutionary? 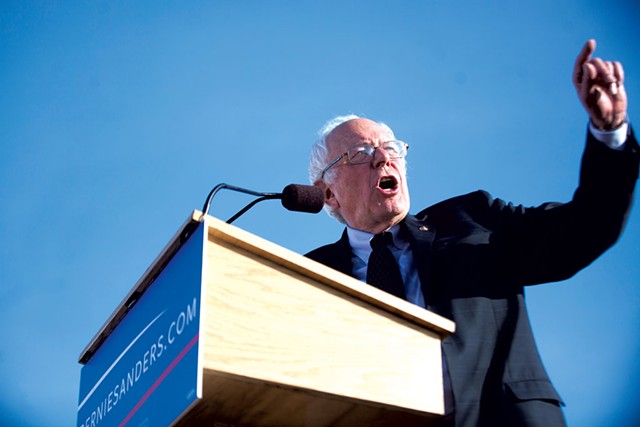 I didn't get involved in the campaign to nominate Eugene McCarthy as the 1968 Democratic presidential candidate, because I refused to "Get Clean for Gene."

McCarthy was the antiwar candidate, running to unseat Lyndon Johnson. Richard Nixon, the Republican, was talking about nuking Vietnam. But Johnson was hardly better. He'd been escalating the war with a vengeance and without apology, and there was no end in sight. We needed an alternative. McCarthy was the Bernie Sanders of the 1960s.

McCarthy was not just antiwar. His goal — and that of the rump caucus Americans for Democratic Action, which endorsed him — was to move the Democrats to the left. Getting clean for Gene was part of this strategy. We longhaired, unwashed hippie radicals were supposed to cut our hair and put on suits or skirts. By disguising ourselves as ordinary upstanding American citizens, the thinking went, we would win ordinary upstanding American citizens over to a progressive Democratic Party.

I didn't want to be an upstanding citizen. I wasn't even sure I wanted to be an American. But I was emphatically uninterested in getting clean, for Gene or anybody else. I was a revolutionary, not a Democrat.

What is Sen. Bernie Sanders? He has officially joined the Democratic Party. During the campaign, he has called himself an independent some of the time and a Democrat other times. Now he knows he'd better wear the team colors if he wants anyone to listen to him at the Democratic National Convention. Yet he'll always be an ambivalent Democrat. Fine, it's hard for a thinking person not to be.

You do not get radical change by electing a president — any president, even one who starts out calling himself a revolutionary. In fact, if you look around the world at political parties with the word revolution in their names, they're likely to be the establishment party. In Mexico, the Institutional Revolutionary Party controlled the government, with rampant corruption, for seven decades. It lost power for a few minutes, then came back. The PRI, as it's called, is so much institution and so little revolution that the Mexican equivalent of the phrase "You can't beat city hall" is "Go beat the PRI."

Bernie's campaign has shown that America's political map is more complex than the one the media draw. He exposed a river of liberalism — even radicalism — wider than many knew. A recent YouGov poll supports this hunch: Among respondents under 30, 43 percent had a favorable view of socialism. Only 30 percent said the same of capitalism. Sanders has given voice to these feelings, but he didn't create them. Elected officials may provide leadership, which is important. But they get elected — and they get the stuff to provide leadership on — from social and political movements.

In fact, as Noam Chomsky pointed out, Bernie is not even that radical. He's "basically a mainstream New Deal Democrat, [whose] positions would not have surprised President Eisenhower," Chomsky told an audience at the New York Public Library.

In the 1968 primaries, McCarthy gave Johnson a run for his money. The charismatic Robert Kennedy also gave McCarthy a run for his money — until Kennedy took a fatal bullet through his skull. The party machine backed Hubert Humphrey, the un-Bobby in style and substance. Nixon won. The war went on until we lost. I don't know if Humphrey would have done any better. But I'm pretty sure he would not have been impeached for committing high crimes and misdemeanors while occupying the White House. I was riveted by Watergate but not surprised.

Since 1968, I've come to terms with my American citizenship (though I still try to avoid being upstanding). I accept, unhappily, that our system gives us two parties too big for anyone else to succeed, as Amy Davidson put it in the New Yorker. They are also too big to move quickly, or probably to move much at all. To get closer to your ideals, work small.

For me, this means that in the voting booth I am a Democrat. On the street and on the page, I'm a radical. I don't confuse the two.

I'm no longer a revolutionary — I've seen or studied enough revolutions to know that what starts with violence usually ends with violence. But I know this: Radical politics means fighting for your highest ideals. Legislative and electoral politics are about splitting the difference.

So, bring your ideals to a presidential campaign, but don't be disillusioned when you find out that presidential politics are not friendly to high principle. If you want to preserve Social Security, abortion rights and the entire planet — to name a few things — vote for the Dem, whoever she or he is. If you want radical change, get into the streets and agitate.

The revolution will not be televised on C-SPAN.

Correction, May 5, 2016: This piece has been updated to clarify Bernie Sanders' stance that electing a president will not bring about a revolution . Also, an earlier version of this story mistakenly reported who won the Democratic primary in 1968. It was, in fact, Hubert Humphrey.