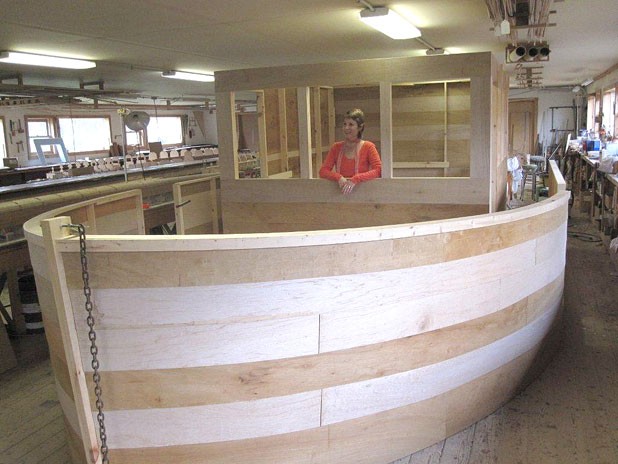 Given that kind of exposure for a 20th-century opera, it seemed logical that the Opera Theatre of Weston would choose Noye’s Fludde to produce in January 2013 as its annual winter opera for children and families. But Nan Nall, who founded OTW with fellow Weston resident Lise Messier 13 years ago, says the company made its decision long before the movie came out — just after Tropical Storm Irene hit Vermont on August 28, 2011.

“We would have performed it last January,” she explains, but area towns hit hard by flooding from the storm, such as Jamaica and Rochester, were still coping with the devastation. “One girl from Chester watched her house go down the street,” Nall adds.

That child was one of 2600 in 22 southern Vermont schools who participated in OTW’s extensive outreach programs this year. Each year, the company helps area teachers find cross-disciplinary ways to prep their students for its productions, and it brings scaled-down versions of the operas to their auditoriums. But this year it added a new outreach program with a therapeutic bent. The Storybook Opera Project, run by OTW choreographer Ashley Hensel-Browning — a dance-education specialist who earned her master’s in education from Harvard — helped local schoolchildren write about, and act out through dance, their experiences of Irene.

Noye’s Fludde is likely to captivate all kids, traumatized or not, for many reasons. Inspired by another devastating flood that hit the composer’s hometown on England’s east coast in 1953, it tells the world’s most recognizable flood story in a single act that lasts under an hour. It’s in English, albeit an antiquated version — Britten adapted his libretto from a 15th-century miracle play, a medieval genre used to teach biblical stories to illiterate audiences. And the action is simple.

To wit: God asks Noah to build an ark; Noah and his family do so — onstage, in six minutes; the animals board two by two; Noah’s wife would rather drink with her “gossips” than board, so her sons have to carry her on (“Forsooth, such another one I doe not knowe!” Noah wails in frustration); the climactic storm and flood come and recede; the raven and dove fly out and the latter returns; and God creates a rainbow to signify his promise that he’ll never do that again.

All this takes place in a wooden house that magically transforms into a beautiful ark. At least that’s the plan, according to the set’s creator, Graeme King, a world-renowned wooden rowing-shell builder based in Putney. King Boatworks has a backlog of handcrafted single-scull orders going back to a wedding present commissioned 13 years ago. (“I tell them it’s holding their marriage together,” says the native Australian with a laugh. “If I make it for them, they’ll get divorced!”) But King put those projects aside to devise a set that could hold 34 people, rotate 90 degrees and be dismantled and converted by the cast as they sing.

Best of all for young audiences, Noye’s Fludde features only three adult performers — Noah, his wife and the Voice of God (played by the Houston-based baritone Christopher Besch, Stratton soprano Peggie Telscher and Weston Playhouse producing director Steve Stettler, respectively) — and 32 children. Local kids will sing the parts of Noah’s three sons and their wives and 12 pairs of animals, and dance the raven and dove parts.

Britten put his juvenile and adult singing roles on equal footing in a truly powerful score. And into his slightly dissonant music he wove three famous and melodic hymns that many children may recognize — especially the one that punctuates the growing percussive chaos of the storm scene, the Victorian naval song “Eternal Father, Strong to Save.”

“The storm scene will not be scary at all, because some children have really been affected by Irene,” promises Annie D’Olivo, the production’s general manager and the lead percussionist in its small orchestra. For one thing, the audience will be invited to sing that hymn (and the other two, which open and close the opera) along with trained singers who will sit in their midst. And D’Olivo’s section, which includes some young musicians, will have fun creating the storm. Britten’s unusual orchestral directives include hitting “slung mugs” — six cups strung together — with a wooden spoon to imitate the first drops of rain.

D’Olivo, a percussion-piano-voice teacher who studied Britten in her native Britain, says the opera’s music ranges from “very somber at the start to absolutely delightful and simple when the children come out. It’s very accessible,” she adds.

And who knows what impact it will have on young ears? Wes Anderson was in a production of Noye’s Fludde when he was “10 or 11,” he explained at the Cannes premiere. “That music is something I’ve always remembered, and it made a very strong impression on me. It is the color of the movie, in a way.”

OTW’s audiences may not become opera singers, but they will likely retain the feel of that Britten score for a long time.