Opera Preview: 'The Diaries of Adam and Eve' 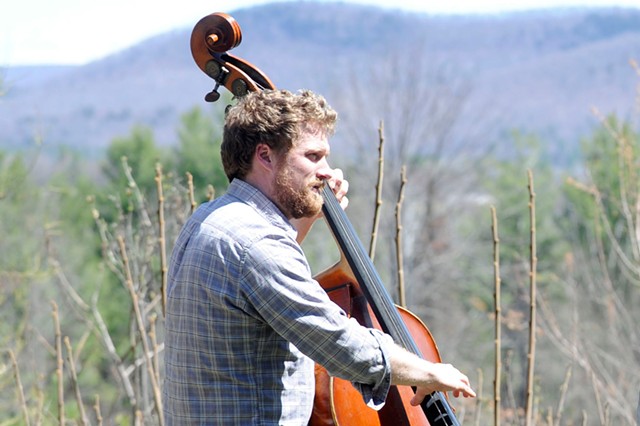 How would the first two human beings have understood the world? In Extracts From Adam's Diary (1904) and Eve's Diary (1906), Mark Twain imagined an Eve who looks up at her second night sky and is distressed to find that the moon has "got loose" and slid away. "It should have been fastened better," she writes in her diary. Adam, meanwhile, grumbles in his, "This new creature with the long hair is a good deal in the way. It is always hanging around and following me about."

One might imagine that Twain's take on the Biblical story is a romp from beginning to end. After all, the great American humorist was allergic to religion. But Twain wrote Eve's Diary two years after the death of his wife of more than three decades, Olivia Langdon. Eve is his touching tribute to "Livy," as he called her. A true humanist, the first woman is a chatterbox who is thrilled with everything she finds in Eden, a curious soul determined to puzzle out the world through scientific discovery.

That figure resonated deeply with Marshfield composer Evan Premo when, a decade ago, he discovered Twain's texts combined into a single edition by editor Michael Mojher, who followed Twain's intent to alternate the two diaries' entries.

At that point, Premo was an undergraduate composition-and-bass student at the University of Michigan. A commission from the nearby Pine Mountain Music Festival became his 2007 chamber opera The Diaries of Adam and Eve, which was also performed at the university that year and at the 2010 Pine Mountain fest. This weekend, it is being revived for a Vermont premiere, with three performances in Randolph and Warren.

When he composed Diaries, Premo says, he had in mind his future wife, voice performance major Mary Bonhag. The two had met on the first day of classes and become inseparable. Premo had already written other works for Bonhag, a soprano, to sing with piano accompaniment, as well as pieces for bass, wind ensemble and other chamber combinations. But Twain's texts gave him a more personal way to honor her.

"Eve's curiosity and wonder about the world matches Mary's so much," says Premo, who founded Scrag Mountain Music with his wife when the couple moved to Vermont. (The Diaries performances will wrap up Scrag's sixth season.) "Mary takes time with every flower, looks at everything with reverence and spirituality. In so many ways, Mary was Eve."

The Diaries of Adam and Eve was written for soprano, baritone and an onstage quartet with a participatory role (at one point, the first violinist stands up to impersonate the serpent). In Vermont, as at the work's Pine Mountain premiere, Bonhag will sing Eve, and the New York City-based Aeolus Quartet will play. A student group at the 2007 performance, Aeolus has since established an international performance circuit, won many prizes and completed a graduate residency at the Juilliard School.

Baritone Matthew Morris, Bonhag's colleague from her graduate days at Bard College, will sing Adam. The revival's director is Edwin Cahill, Morris' partner and frequent collaborator at voice and opera festivals in Israel, Italy and around the U.S. Staging promises to be more involved than the ladder-for-an-apple-tree sparseness of the premiere, but still scaled to chamber opera.

Premo says Bonhag helped him pare Twain's writings down to their essence for the 70-minute work. In the first of two acts, Eve mistakes Adam for a reptile, and Adam moves from annoyance to recognizing Eve's beauty and the pleasure of her company. It ends with the sound of an apple crunch.

In the second act, "After the Fall," Cain is born and mistaken for a fish by his father. Abel follows; the two grow up. Soon the parents have to come to terms with their second son's death, and the opera ends with Eve's death.

"The Moon Got Loose" is one of the opera's central arias — though Premo hesitates to use the genre's traditional word for a song for solo voice. "Stylistically, [Diaries] is a hybrid, somewhere between opera, musical theater and operetta," he says. Some passages are spoken.

Premo and Bonhag say they were partly inspired to revive the work by Brookfield composer Erik Nielsen, who successfully revived his opera A Fleeting Animal for a Vermont tour last fall and is now planning to bring it to several surrounding states. But the couple also knew they would eventually share the work with their dedicated Scrag audiences.

"We've wanted to bring it to Vermont ever since we moved here," says Premo. "It's so much a part of our history."

Bonhag adds that she wants to reprise Eve not just because "she's such an exuberant character," but because the work "transports me back to a very special time in my life and in my relationship with Evan. Those college years, discovering each other — it was like Eve discovering the world."

The Diaries of Adam and Eve ends with Adam declaring, "Wheresoever she was, there was Eden." Asked if that's still true of his feelings about Bonhag, Premo says with a laugh, "Wow, what a question." Then he adds, "No, it really is. What's true in this story and in ours is that there is pain and suffering. So, in Twain's definition of Eden, absolutely. It's not painless, not without difficulties, but yes, it's Eden."

The Diaries of Adam and Eve, a chamber opera by Evan Premo, Friday, August 5, 7:30 p.m., at Chandler Center for the Arts in Randolph; Saturday, August 6, 8 p.m.; and Sunday, August 7, 4 p.m., at Phantom Theater in Warren. Donations. Call to reserve a seat at Phantom: 496-5997. scragmountainmusic.org, chandler-arts.org, phantomtheater.org