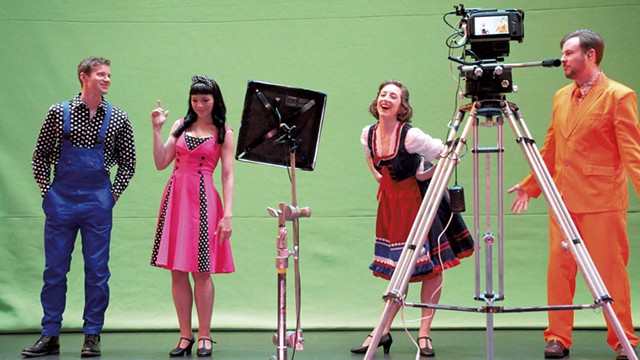 While much of the opera world was reeling from the pandemic, the Opera Company of Middlebury was exploring the world of opera as video entertainment. Eight months ago, it released a 10-minute, professionally produced video of the contemporary micro-opera "Completing the Picture" by Michael Ching. The absorbing story of Chinese workers who helped build the Transcontinental Railroad was told through historical footage and self-recorded performances by four singers and a pianist.

Building on that success, OCM will soon release its major pandemic project: a filmed production of Leonard Bernstein's comedic operetta Candide, first performed in 1956 and based on the 1759 satire by Voltaire.

The two-hour production will be available for streaming, with a ticket purchase, from June 15 to 30 on OCM's YouTube channel.

"Since Candide is a bit of a cartoon already, we thought it would adapt well to a bold, bright video," artistic director Doug Anderson said in a phone call. Anderson should know what works on screen: He once was head writer on the CBS daytime drama "Guiding Light."

The operetta follows the title character's coming of age as he travels the world and learns to temper his optimism about the human race. Sung by tenor Quinn Bernegger, Candide discovers through a series of ridiculous misadventures that he can't trust the refrain of his teacher, Pangloss (baritone Joshua Jeremiah): "All is for the best." He also finds that his true love, Cunégonde (soprano Cree Carrico), is not the angel she appears to be.

In the end, the operetta counsels, what one already has brings happiness enough.

Laboriously created in March and April in adherence with strict pandemic protocols, OCM's production features eight singers, all regulars with the company. They quarantined together for three weeks so they could sing unmasked as a cast for the cameras. And they sang while wearing earbuds, because the orchestra, under music director Michael Sakir, was recorded separately ahead of time.

The chorus was also recorded separately with its members singing six feet apart and listening to the orchestra on headsets. Even the narrator — played by former Vermont governor Jim Douglas — was filmed reading his part in an empty theater. Middlebury production company Projection Films, headed by Tim Joy, did the mixing and editing.

As director, Anderson was determined not to "just point a camera at a singer and call it a day," he said. Accordingly, the production makes liberal use of green screens, overhead shots, rear projections and drones. "Each scene has something amazing in it," he promised.

Those amazing parts are tempered — rather like Candide's rosy views in the operetta — with shots that reveal the technology at work: a dose of reality for each visual feint. When Candide survives a shipwreck by riding a plank in the water, for example, the scene begins with Bernegger placing the plank on green-screen flooring and lying on it before the waves are added.

"These are tricks that we never could have done onstage," Anderson said. Video had other unforeseen advantages, he added: Sound can be perfectly balanced, engaging close-ups are possible, "and we don't have to print a program."

Joshua Collier, artistic director of Brandon-based Barn Opera, sings all the operetta's tenor parts except the lead. Collier said that one scene, in which one of his characters sells a decrepit boat to a clueless Candide, "was fun because [we played it] more to the camera, breaking the fourth wall. Film gives you the ability to do this very comedic stuff."

Bernstein's work is best known for its music — particularly its overture, Cunegonde's showpiece aria "Glitter and Be Gay," and the final ensemble piece, "Make Our Garden Grow." (Though the operetta is in English, the video will include English subtitles.)

Candide is often performed in concert rather than in fully realized productions, Collier noted, not just because its music is "enchanting" but because its subject matter can be seen as culturally insensitive. In some stagings, for example, the costuming and language around Candide's travels to Suriname and other locales can veer into the stereotypical. "There's a lot of talk of savages and problematic colonialism," the tenor said. "But," he added, "Doug scrubbed a fair amount of that out."

Having a narrator was useful in that regard. In addition to helping the operetta "move very quickly from number to number" and giving the production "a lot of music-theater snap," according to Anderson, the framing created opportunities to address the problematic material. While reading Bernstein's script, in one instance, the narrator breaks off and says, "No, I'm not saying that."

Anderson said he enlisted Douglas to be the narrator in part because the Middlebury resident "always got laughs." "He's sitting in this leather chair like 'Masterpiece Theatre,' reading from a book," the director said with a chuckle. "It's his big foray into show business."

Douglas took issue with that last assumption during a phone call. "You know politics and show biz are related, right?" he deadpanned. While governor, Douglas secured federal funding for the restoration of Town Hall Theater, an effort led by Anderson, and he helped cut the ribbon at its opening in 2008.

The former politician admitted he has never seen an OCM performance, but he is happy to promote Candide. "Anybody might be interested in watching it, even just for the special effects," he said. "I recommend it. I think that's in my contract, too."

Candide, by Leonard Bernstein, streams June 15 to 30 on Opera Company of Middlebury's YouTube channel. $35 per individual; $60 per household. ocmvermont.org

The original print version of this article was headlined "Candide Camera"