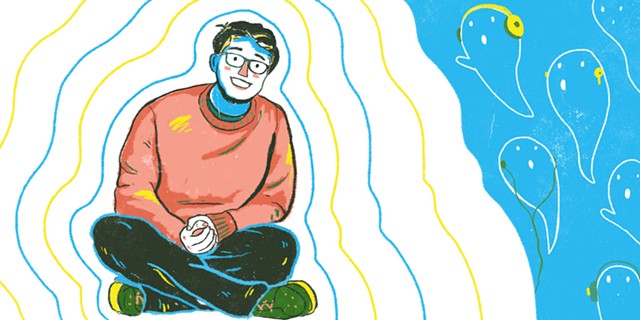 First things first: Bluum Zine is a "zine," but it's not actually a zine. Which is to say it's not a homemade, self-published magazine but rather an online-only publication dedicated to showcasing the art and written works of queer creatives.

"There were a lot of zines being made in the queer community for a long time because it was a kind of secret, private way to disseminate gay information in a time when there weren't a lot of mainstream gay publications," she said.

Johnson, who's originally from Atlanta and now lives in Lebanon, N.H., was galvanized to start the publication after watching many of her peers at the Center for Cartoon Studies in White River Junction pursue their own passion projects this spring. "The longer I sat on Bluum Zine, the more I realized it paid tribute to the publication's forefathers," she said.

These days, an abundance of publications are made by and for LGBTQ people, including Autostraddle and Condé Nast's community platform called "them." But in Johnson's view, not many outlets are dedicated to showcasing the joyful everyday experiences of these individuals and communities.

Instead, the constant deluge of pieces about queer people having their rights taken away or imperiled, coupled with articles calling out problematic celebrities, can be thoroughly exhausting, Johnson said. Last week, them. ran a front-page story headlined "Queer Russians Are Being Brutally 'Hunted' and Murdered."

"I think in the queer community we're saturated with a lot of negativity even without seeking that out," she said.

The headlines on Bluum offer readers a reprieve from the fatigue of negativity and the effort of resistance; one recent offering is Will Betke-Brunswick's comic strip "Indoor Femme Tries on His Summer Butch." All pieces on the site are nonfiction, but their tone, whether lyrical or prosaic, is entirely up to contributors.

Johnson wrote three of the site's six posts to date. An old friend of hers, Kellen Flatt, 23, wrote one called "Gay Lessons I Learned From Straight TV."

"To me, Bluum is like if that little piece of Pride Month that makes you feel safe and happy in your identity was something you could consume and revisit whenever you wanted," Flatt suggested.

Even superficially, Bluum oozes cheeriness. Its homepage is a mosaic of color: blues, greens and yellows against a minimalist white background, under the site's playfully askew title. When she was brainstorming names for the project, Johnson said, the word "bloom" kept popping into her head. (Later, she realized it was because queer singer Troye Sivan has a song and album of the same name.) Spelled correctly, all "bloom" domain names were taken, so she settled on the misspelled rendition.

The publication's sleekness is a tribute to Johnson's design background. She studied new media and mass media arts at the University of Georgia before moving to Vermont last year to study at Center for Cartoon Studies.

To pay the bills, Johnson works full time at the Geisel School of Medicine at Dartmouth College; she's a research assistant investigating links between media consumption and adolescent smoking and drinking habits. Off the clock, she labors with love on Bluum from her small Lebanon apartment or the Hanover Starbucks. Before launching the zine in June, Johnson often spent 25 to 30 hours per week getting the site ready, she said.

"It's been hard to get people to submit things," she admitted. "But I think once the site launched, people were like, 'OK, this is really happening.'"

Johnson said it comes as a shock to most people that she pays contributors, but she wants creators to feel like their work is worth something. She pays an average of $25 per piece out of her own pocket and supplements each with her own illustrations, which she draws using an iPad program.

Eventually, Johnson said, she'd love to have more illustrators and regular contributors. She'd be thrilled to take Bluum to print, but printing is expensive, and she hasn't yet managed to snag a micro-grant.

As the site evolves, Johnson is posting submissions on an irregular basis. She's giving contributors considerable latitude when it comes to content.

"If some queer person came to me and wanted to write about a time that they began [being] best friends with their waiter at Waffle House and it had nothing to do with either of them being queer, I'd want to publish that, because it's a story from a queer person's life about a time that brought them joy," she explained.

Johnson herself said she finds immeasurable joy in doing ordinary things with her girlfriend, such as going to the grocery store or snuggling in bed.

"Queer joy is living life joyfully in the face of people who would really love to take that away from you," she said.

"It's the idea of queering straight things," she added with a sigh. "Doing that with my partner, who's a woman — that's the best."