Online Exhibition 'Our Collection' Traces the Origins of Shelburne Museum 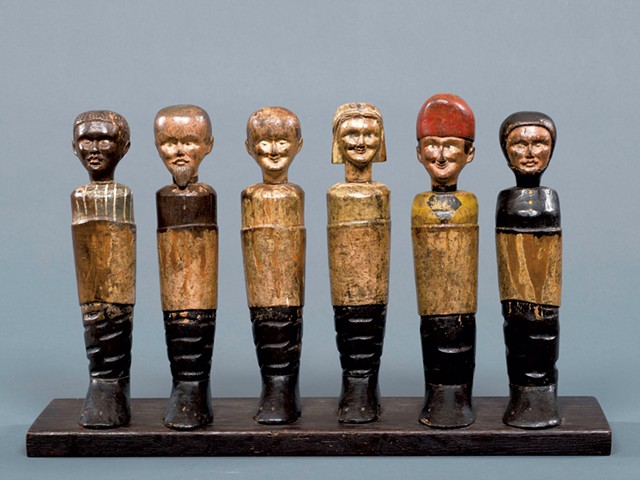 The pandemic has had a least one good result: accessibility to museum collections. Shelburne Museum is among the institutions that have successfully mounted online exhibitions in lieu of, or in addition to, physical ones.

Since the spring of 2020, the museum's website has presented nine virtual shows, each with an opening in the form of a webinar hosted by the curator. Once recorded, the webinars can be viewed at any time along with the exhibition; most remain on the website for a year. And more online shows are to come, pandemic or not, even as the 45-acre campus opens physically in May.

The most recent online exhibition, "Our Collection: Electra Havemeyer Webb, Edith Halpert, and American Folk Art," had its virtual opening on February 9. Conceived and written by associate curator Carolyn Bauer, it focuses on a dynamic duo: the museum's founder and her source for (primarily) folk art sculpture, a New York City art dealer. The exhibition marks the start of a series celebrating the museum's 75th anniversary, hence the focus on part of the institution's origin story.

"Our Collection" also ties into an upcoming physical exhibition: a reinstallation in the Stagecoach Inn of the sculptures Webb purchased from Halpert, cocurated by Bauer, senior curator Kory Rogers and curator Katie Wood Kirchhoff.

"Edith was really revolutionary in how to market folk art." Carolyn Bauer tweet this

Webb, a wealthy socialite, and Halpert, a Ukrainian Jewish immigrant who grew up in New York City, met sometime in the late 1930s, when Webb was about 50 years old and Halpert 12 years her junior. Webb's interest in folk art had begun with her purchase of a cigar-store figure in 1907 when she was 19. The move appalled her parents, who collected fine art from Europe and Asia.

Meanwhile, Halpert worked her way up to opening the first profitable art gallery in Greenwich Village, the Downtown Gallery, in 1926. It featured the works of modern American artists — Georgia O'Keeffe, Yasuo Kuniyoshi, Jacob Lawrence and others — at a time when European art was still considered superior.

According to Bauer, Halpert's way of framing folk art was unprecedented — and it was successful. The gallerist not only convinced famed collectors such as Webb and Abby Rockefeller to acquire American folk art for its aesthetic and historical value, she also sold work to museums across the country. The Nelson-Atkins Museum of Art in Kansas City, Mo., for instance, purchased a large collection from Halpert during the Great Depression.

"Edith was really revolutionary in how to market folk art," said Bauer during a phone call. "She dusted it off from your grandma's attic and presented how you could look at these objects through this different lens."

Webb shared Halpert's view of the genre — an interest that would result in Shelburne Museum's reputation as one of the country's premier collections of American folk art. But, as Bauer pointed out, "Everyone has some folk art in their collections now. Everyone understands it's important."

Webb made her first purchase from Halpert's upstairs gallery in 1941: a carved and painted wood bust of an Indian chief attributed to Samuel Anderson Robb from circa 1880. It likely would have adorned the door lintel of a cigar store in Philadelphia. The sale cemented the women's friendship, and over the next two decades — until Webb's death in 1960 — the museum founder purchased more than 100 folk art pieces from Halpert.

Theirs was such a collaborative effort that Webb dubbed her folk art acquisitions "our collection" in a letter to Halpert, after the gallerist had helped to install it in the newly opened Stagecoach Inn in 1949. "You have no idea how deeply I appreciate your coming up here and working so hard over our (yours and mine) collection," Webb wrote.

The Indian chief bust is one of nine items, out of more than 100, that Bauer selected for the online exhibition. Today, the Webb-Halpert items constitute only a tiny fraction of the museum's holdings. But, as Bauer points out in the webinar, it was among the collections that the founder was "most passionate about."

It's not hard to see why. One eye-catching piece is the carved and painted wood figure of Columbia, aka Lady Liberty, or the female personification of America, made by Henry Leach in 1879 for a Waltham, Mass., weather vane manufacturer.

A marvel of windblown drapery, the figure reaches forward with a dancer's elegant arm while her voluminous belted toga — with dangerously low décolletage — extends in the opposite direction. The sculpture, approximately four feet tall, appears to be a study in form and balance. (The online image can't fully convey a work carved in the round.)

In the online text, Bauer describes two of the works she selected as "racist caricatures": the Indian chief and "Nine Pins," which refers to six remaining bowling pins (from a set of nine) carved from wood sometime between 1867 and 1900. Though the chief has a contented smile and direct gaze, his skin is painted dark red, and he's adorned with a beaded, feathered headdress unrelated to any authentic tribal attire.

The tops of the bowling pins are carved into six individual busts, each with a unique expression and hairdo; the bottom half of each pin is a high, black-painted boot. The heads represent stereotypes, whether white woman or Black or Asian man.

The element of racism in folk art is "something we're hoping to discuss further in the reinstallation," Bauer said. "It's not these exact objects [that are racist] but the greater scope of how minorities were often viewed as stereotypes through exaggerated features or costuming."

"Our Collection" includes one painting, "Penn's Treaty With the Indians," by self-taught artist Edward Hicks, circa 1840 to 1845. Webb purchased the work from Halpert, but the two women didn't see eye to eye on folk art paintings. Webb acquired most of her paintings from Maxim Karolik, a New York City collector from whom she bought more than 100.

But Halpert's influence was greater, Bauer said. "I would argue that, still, our collection of folk art sculpture remains much stronger than folk art painting. Some paintings are fabulous, but we have a lot more of the crème de la crème within the sculpture collection."

The exhibition raises an interesting question: What exactly was the nature of a dealer-client relationship that was also a friendship? In some cases, according to Bauer's text, Halpert claimed not to want to influence her friend's taste; in others, she clearly guided and perhaps even pressured her.

This is speculation outside of Bauer's finely conceived show, however. What interests the curator, she said, is "thinking about folk art in total, understanding the context of how Electra was seeing these works through Edith's eyes. Seeing how Edith did it is just extraordinary."

The original print version of this article was headlined "Folk Tales"