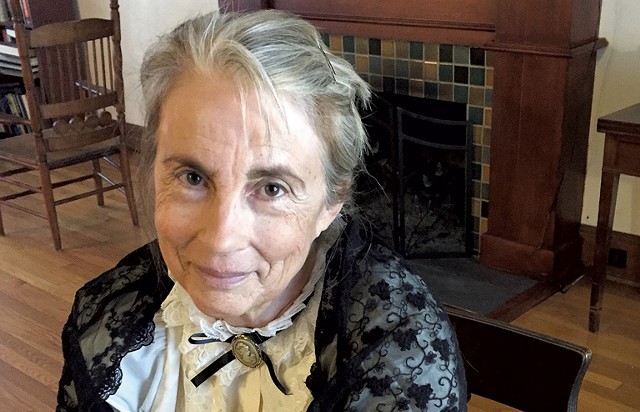 Chances are, when you think of the suffragette movement, the name that comes to mind is Susan B. Anthony or Lucretia Mott. But this weekend Middlebury Actors Workshop celebrates another influential activist for women's suffrage with its production of American Radical: A Play in Two Conversations With Elizabeth Cady Stanton. Kate Redway will perform the one-woman show, which she coauthored with her husband, Stephen Rosenfield. The veteran of off-Broadway theater wrote the play largely in response to learning of the history she shares with Stanton (1815-1902) — who was unknown to Redway for years.

"I was studying the abolitionist and suffragette movements with my students," Redway told Seven Days by phone from her home in New Jersey, where she teaches at William Paterson University. "I was shocked to learn that I went to the same boarding school as [Stanton], and I didn't even know her name." Redway asked around among her old schoolmates at the Emma Willard School in Troy, N.Y., but none of them knew of their school's famous alumna.

Serendipitously, Redway stumbled on some of Stanton's writings at a secondhand bookstore. "Right there in the feminist section were three books: [Stanton's] autobiography, The Woman's Bible and a book about her relationship with Susan B. Anthony," she recalled.

A highly educated woman, Elizabeth Cady married famed abolitionist Henry Stanton. It was her frustration with the abolitionist movement — which stubbornly excluded women's suffrage from its fight for equality — that inspired her to dedicate her life to women's rights. Luckily, her contemporaries had similar ideas.

The complicated relationship between Anthony and Stanton features prominently in American Radical. While Stanton wrote many of Anthony's best-known speeches, the two experienced a falling out in their later years. As Redway put it, "[Stanton] became far too radical for [Anthony]. The thought was that her radicalism would threaten the entire women's movement. Writing a book titled The Woman's Bible was simply too much."

According to the National Women's History Museum, in The Woman's Bible, Stanton "urged women to recognize how religious orthodoxy and masculine theology obstructed their chances to achieve self-sovereignty." Pretty bold for 1895.

So, if you're looking for a depiction of demure, diffident suffragettes, Stanton may not be the gal for you. "I wanted to make sure her spirit came through," Redway said. "She's a spirited, outspoken woman with a twinkle in her eye. And she's really funny."

While Stanton was extremely progressive, she also had seven children and took her role as wife and mother seriously. Like many women today, she found it challenging to balance her domestic expectations with the work about which she was so passionate.

"I was overwhelmed by [Stanton's] life as a mother, her extraordinary ability as a writer and her glorious sense of humor," Redway said. In 2009, inspired by her bookstore finds, she began poring over Stanton's writings and adapting them for the stage.

Redway spent two years compiling the play before it was produced at the university's Hunziker Black Box Theatre in Wayne, N.J. Later, Melissa Lourie of Middlebury Actors Workshop saw the show at a women's business convention. Lourie and Redway are longtime friends who studied together at the American Conservatory Theater in San Francisco.

"Once Melissa saw the play," Redway recalled, "she said, 'I want my daughter to see that.'" Last April, Redway performed a staged reading of the show at Middlebury's Town Hall Theater, and this weekend MAW will mount a full production.

Redway hoped to perform the show under the first woman president. But we all know how that turned out.

"When Hillary [Clinton] lost the election, I thought the play had lost its timeliness," Redway said. "But with [Donald] Trump, the women's movement has gathered itself together again."

Throughout the play, Stanton breaks the proverbial fourth wall by speaking directly to the audience. Her final lines are a resigned warning as she prepares to write a letter to President Theodore Roosevelt demanding the right to vote. She passes the baton, telling the audience, "I'm afraid you'll have to keep at this." Indeed, American women wouldn't obtain suffrage until 18 years after Stanton's death.

Little did she know that the battle for equality would last well into the 21st century. Three weeks ago, Massachusetts Sen. Elizabeth Warren was denied the floor of the U.S. Senate as she attempted to read a letter written by Coretta Scott King, Dr. Martin Luther King Jr.'s widow. In an utterance that quickly became a feminist rallying cry, Senate majority leader Mitch McConnell told the press, "She was warned. She was given an explanation. Nevertheless, she persisted." American Radical documents the longevity of persistent women who quietly advance American history — a timely reminder of how far we've come and have yet to go.