One Way to Avoid Storm Damage: Knock Down Flood-Prone Homes 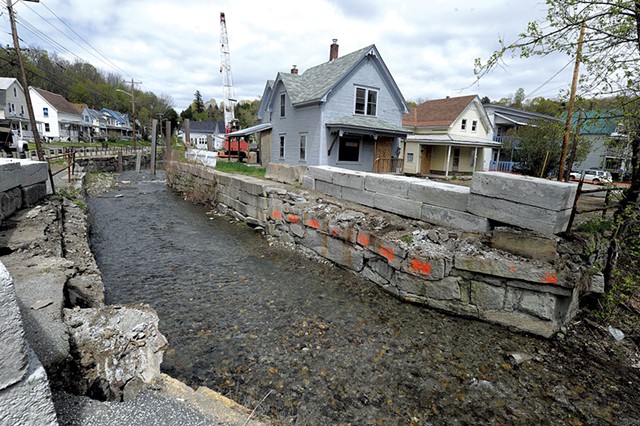 Barre resident Jason Hallock has a rule: If the weather forecast calls for more than three inches of rain, he prepares to evacuate his home on Reid Street ahead of potential flooding. A first-time visitor to the neighborhood might think Hallock's plans are an overreaction. Gunners Brook, the body of water he fears, is usually a six-inch deep trickle, and his backyard, lined with tidy tomato gardens, sits a good 50 yards from the water's edge.

Nevertheless, the brook has flooded Hallock's basement during minor storms that barely warranted a mention in the news. Hallock's isn't the only Reid Street home at risk of repeated flood damage. Last month, state officials announced the government spent roughly $500,000 to purchase five frequently flooded homes from willing sellers in the neighborhood. The houses will be demolished as part of a project touted as a model of flood prevention in Vermont.

Hallock doesn't want a buyout, at least not yet. He hopes an ongoing mitigation project, which includes the home buyouts and strengthening a retaining wall beside the brook, will put a stop to the flooding.

As the state continues to recover from 2011's Tropical Storm Irene, environmental experts have increasingly come to believe that buying and removing flood-prone homes makes more sense than rebuilding and repairing in areas like Reid Street.

"We're starting to build consensus that this is the way we are going to survive these flood events," said Mike Kline, who leads the state's river management program. "We're ... being a little more forthcoming with property owners about the ongoing expense and hardship associated with maintaining structures in some of these dangerous places."

The recent devastation from hurricanes Irma and Harvey further showcases the risks of building in flood-prone areas and may invigorate buyout efforts.

In Vermont, removing homes in vulnerable places is a relatively new strategy. It began after Irene brought massive flooding to the southern and central parts of the state. The storm killed six people, washed out dozens of roads and stranded entire communities.

As part of a larger aid package, the Federal Emergency Management Agency provided Vermont $20 million for buyouts after Irene, according to Ben Rose, chief of recovery and mitigation for the state. Moreover, the federal government has issued eight additional disaster declarations in Vermont since Irene, mostly for intense rainstorms that caused local flooding. Those events have brought another $2 million in federal aid, some of which funded more buyouts.

Government officials say buyouts appeal to both the head and the heart. They take people out of harm's way and, by eliminating the need for costly repair and restoration projects, save taxpayers money over the long run. Those benefits are becoming more important as officials prepare for a future that they believe will have more large storms.

The state has bought 140 homes since Irene. The buyouts occurred in every corner of Vermont but were concentrated in Windsor and Washington counties.

Technically, any home in a FEMA-designated flood-prone area is eligible for a buyout, if there is enough money, and if everyone — homeowners, towns, the state and the feds — is on board. The property acquisition program is for both homes that have been damaged by floods and those that could be in the future.

For most of the home buyouts in Vermont, FEMA pays 75 percent of its assessed value. Nonprofits and other federal government programs fund the balance — or, if they are desperate enough to get rid of a vulnerable property, homeowners can agree to accept less than the home's value.

Once homes are demolished, the properties are deeded to local communities, with restrictions that they can never be developed.

Fifteen miles west of Barre, officials in Northfield are wrapping up a six-year effort that led to the demolition of 18 flood-prone homes on Water Street. Part of the neighborhood was converted into a public park.

Zoom in to see where the state has purchased homes prone to flooding. The map also shows FEMA-designated flood zones (The agency has not mapped all of Vermont).

"That did it for people," Braun said. "People in the neighborhood came to the town and said, 'We're done, we're out of here.'"

Making matters worse, some of the residents did not have flood insurance, either because they couldn't afford it or because they didn't think it was necessary, Braun said.

Even with willing sellers, the buyout process was tedious, Braun said. The feds took a year to approve the applications. The first house didn't come down until May 2013.

The loss of even a few homes can have a significant impact on grand lists in smaller communities.

"There are definitely people in Northfield who are still unhappy about that," Braun said. "What I said at the time and I will continue to say is that it wasn't the buyouts that hit the grand list, it was Irene. The flooding destroyed the value of those properties."

Despite Barre's relatively large local tax base, city manager Steve Mackenzie said officials there were initially concerned about losing taxes generated by five homes that are being demolished.

Vermont officials acknowledge they have been able to demolish only a tiny fraction of homes that are in flood-prone areas. More than 7,000 people requested government aid for damage after Irene, Rose said — so the 140 homes that came down were just a sampling.

"We will never run out of hazard-mitigation opportunities," Rose said.

Among the homeowners who took a buyout after Irene was Don Reddick, whose house on the Tweed River in Stockbridge stood in the floodway.

Reddick was inside with his wife as the water rose that August day. They barely escaped before the river slammed into the house. The couple concluded that they didn't want to risk dealing with another flood.

"It was a no-brainer," said Reddick, who now lives in Norwood, Mass. "There was an element of trauma involved. I had people say, 'What are you scared about? It only happens every 100 years. You will be dead and gone when it happens again.' But we felt, if you take the buyout and eliminate the house, you might be saving someone down the road, because it's going to happen again."

Eight of Reddick's neighbors also took post-Irene buyouts, but a ninth, Dave Barcomb, declined to do so. Barcomb had recently completed an expensive addition to his second floor and didn't want to abandon his home, despite the damage done by the four feet of water that inundated his first floor.

With his neighborhood now largely vacated, Barcomb said he enjoys the increased privacy and quiet. He can even see the stars better, he said.

The tab for buying all Vermont homes in flood-prone areas could run into the billions of dollars. And the federal government has severely limited the number of homes that are even theoretically eligible.

The FEMA maps — which purport to highlight homes that have a 1 percent chance of experiencing significant flooding in any given year — are outdated and incomplete, experts say. And if a home isn't on the map, owners aren't eligible for FEMA aid.

Several homes in Jamaica that were flooded by Ball Mountain Brook during Irene were not in the FEMA-designated area and, therefore, were not eligible for federal buyout funds.

Some of the FEMA maps are 40 years old, and the agency has mapped only 20 percent of the state's rivers, concentrating on the largest bodies of water, Kline said. That offers a limited view of Vermont's flood dangers. (A grant program administered by the Agency of Commerce and Community Development has funded buyouts of a few homes that were not covered by FEMA.)

When FEMA does step up, home purchases are not the end of the story. After arranging for buyouts in Northfield, town officials realized they had an opportunity to do even more to prevent flooding.

Officials created a five-acre public park where the homes once stood. They restored native vegetation to allow the area to serve as a natural release valve that could mitigate downstream flooding when the Dog River rises.

Officials have similar plans for the land near Gunners Brook in Barre. They aim to convert a cluster of five homes into a floodplain with trees and shrubs. The city also removed a small bridge that had caused water in the brook to back up, and it added concrete pillars in the brook to collect debris.

But getting the homes knocked down was the most important part of the $1 million project, Barre Mayor Thom Lauzon said. Homeowners in the neighborhood, most of whom did not have flood insurance, could not afford to rebuild again and again.

"This was long overdue," Lauzon said at an August press conference. "They were just constantly caught in the middle, digging two feet of muck out of their basements."

The state plans to keep spreading the word about the buyout program and is collecting success stories.

After Irene, a federal buyout removed two homes near the flood-prone Neshobe River on Newton Road in Brandon. During a rainstorm last July, the Neshobe rose again, flooding the empty field where the two homes once stood, state hazard mitigation officer Lauren Oates said. But other Newton Road homes were damaged, and the town is on the hook for $500,000 to repair the washed-out road.

Later this month, Oates and other officials will meet with the Brandon Selectboard and Newton Road homeowners to discuss whether it's time for more buyouts.

"In the best possible solution, we'd be able to purchase those homes, and the town could decommission the road entirely," Oates said. "If we could do it all over again, we wouldn't build there in the first place."

The original print version of this article was headlined "One Way to Avoid Storm Damage: Knock Down the Houses That Flood"