According to the U.S. Holocaust Memorial Museum, high school students in 22 states are required to learn about the Holocaust, the period between 1933 and 1945 when Germany’s Nazi regime murdered six million Jews. Vermont isn’t one of the those states, so 15-year-old Eliza Doucet of Starksboro is taking matters into her own hands.

She's planned a Holocaust memorial event in Bristol on January 27 — the anniversary of the liberation of the Auschwitz-Birkenau, now recognized as  International Holocaust Remembrance Day. It will commemorate the Jewish lives lost and educate others about this dark chapter in human history.

It’s important, she said in a phone interview, because “the Holocaust still affects people to this day. Our lives are forever changed by it. Entire families and entire lineages were lost.”

That includes a branch of her own family. 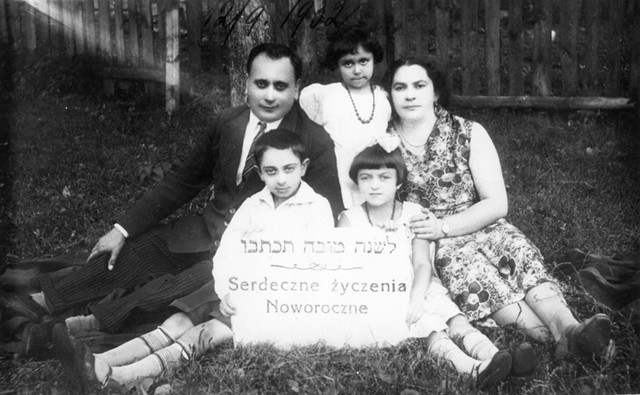 Her maternal grandparents are descended from people who immigrated to the U.S. to escape World War II, but none of the members of her maternal great uncle’s family survived the Holocaust.

The murder of Doucet’s great uncle, great aunt, and their children is documented in the book The Last of a Generation, written by Falik Zolf, who witnessed their deaths. The chapter in which the details appear was translated from Yiddish by Doucet's maternal great grandfather, Ben Mandelblatt, whose last name was changed to Mandel after he came to the U.S.

Doucet learned these details after her maternal grandparents started writing a memoir — and her older sister, Anna, did a school project on their family for a class at Mount Abe. Anna managed to locate a photo that the Mandelblatt family had mailed to her great grandfather wishing him a happy Rosh Hashanah. They were killed in 1941, shortly after sending it.

“That picture was a huge reality check for me,” wrote Doucet in an email. “Just because this happened a long time ago ­— really not that long ago — it doesn’t mean that we’re free from it.”

Doucet, a sophomore at Mount Abraham Union Middle/High School in Bristol, also studied the Holocaust in school for the first time this year. Though the state doesn’t require it, the school does offer some instruction about the Holocaust. Scott Beckwith, Doucet’s teacher for  American Studies, said the class is geared towards eleventh graders but tenth graders like Doucet who show “exceptional work and ethics” can join, too.

In addition to studying 20th century American history and American literature, his students spend five to six weeks exploring the Holocaust through film footage, photos and first-hand accounts of Jewish and German children who wrote in diaries about their experiences.

It’s powerful material, Beckwith said. “I think the kids are shocked, surprised and much more aware of human nature and how it can change.”

Beckwith explained that Mount Abe middle school students also take a course on anti-Semitism and the Holocaust — Doucet went to middle school elsewhere and missed it. Last year, two of the middle schoolers started a petition to make Holocaust education required in all of the state’s public secondary schools. They received more than 850 signatures.

Doucet said in a press release that she was moved to organize the January 27 event after she “noticed subtle but very real signs of anti-Semitism and a clear complacency surrounding it” in her community. Over the phone she offered some examples: On the bus the other day she heard people joking about Anne Frank. And during a class discussion in school about Japanese internments camps people began making comparisons to the Holocaust.

Doucet worked closely with the Vermont Holocaust Memorial to organize the event, which will begin with an educational presentation she’ll deliver inside Holley Hall at the Bristol Recreation Center. Afterward, it will move onto the Bristol Town Green. Speakers will include two second-generation Holocaust survivors. There will be a leaf project to remember the children lost and a memorial candle lighting.

Doucet’s twin sister, Emma, also helped by instituting COVID-19 safety measures, such as requiring and supplying N95 masks at the door and requiring attendees to show proof of vaccination. Prioritizing public health runs in their family — mom Julia Doucet is an outreach nurse at Middlebury’s Open Door Clinic and was a Seven Days Pandemic All-Star.

Eliza, who is part of the Eagle Student Activism group at her school, said her draw to activism began in 2017 after her family took her to the Women’s March on Washington.  “It was amazing to see all of these people coming together and exciting for all of our futures. That really inspired me,” she said.

She started to look into ways that she could fight hate and reflected on anti-Semitism in her community. After the 2016 election, someone spray-painted a swastika on her family’s house of worship in Middlebury, the Havurah House.

“That was my first experience with anti-Semitism,” said Doucet. “I knew that as a Jewish person I might face hate, but I had never seen it first-hand. That opened my eyes.”

So have recent fears of violence at her own school. A Seven Days article reported that many students stayed home on December 3 after receiving an emailed announcement from Principal Shannon Warden the night before, warning that unidentified students had said they planned to bring weapons to school. Police were stationed outside the school that day.

“It drove home the truth that we aren’t safe in schools, especially kids of minority backgrounds,” she said. Her Jewish identity has brought her “a lot of connection and security,” she noted, but these recent incidents have made her worry that her faith could make her a target.

She hopes that her Holocaust Remembrance Day event will bring together like-minded people to help those who don’t yet understand the importance of the Holocaust. She wants it to create a ripple effect that people can take into their own lives.

“I think that those little changes add up,” she said, “and they make a big difference.”