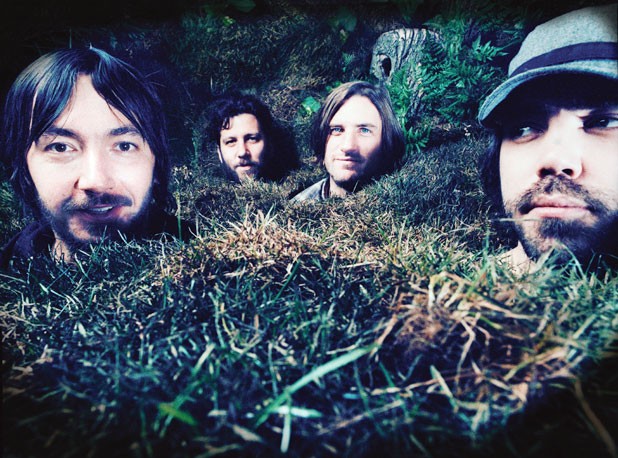 Montréal native Patrick Watson is the front man for the band Patrick Watson. Yeah, we know. It's confusing. In any event, Patrick Watson (the band) recently released their fourth full-length album, Adventures in Your Own Backyard, a follow-up to 2009's Wooden Arms. Prior to that, Close to Paradise won the Polaris Music Prize — Canada’s version of England’s Mercury Prize — in 2007.

The new LP, recorded in Watson’s (the guy’s) Montréal loft following five years of near-constant touring, is a poignant exploration of the treasures to be found in familiar places if one is curious enough to look for them. It is a richly textured and nuanced blend of chamber folk and indie rock, beautifully stark and melancholy one moment, joyously dynamic the next.

Seven Days recently chatted with Patrick Watson, the guy, by phone from Montréal, in advance of Patrick Watson the band’s show at the Higher Ground Ballroom, opening for Andrew Bird, this Friday, July 20.

SEVEN DAYS: The idea of appreciating home is one of the record’s strongest themes. How did touring for so long play into writing the album?

PATRICK WATSON: We had been traveling so much that home became super exotic. So the idea is carrying the curiosity you have when you travel with you while you’re home. You can get a lot more out of familiar surroundings that way.

PW: Goddamn, why did I ever say that? [Laughs.] Andrew Bird, actually. Sometimes when you tour and hear a show every night, you just get hooked on the music. Also, Connan Mockasin. Forever Dolphin Love is a beautiful, awesome record. I got into the new Feist record a bit.

But I think the records you end up listening to at home are not necessarily the records you should make. In a way, you get more ambitious in a studio and want to make something big and grandiose. And really, what you want at home is something that lets you take a break from the world. And that’s usually something simple. And the records we made before, I didn’t think they were something I would listen to at home. So for this one I just wanted to bear down and make some touching songs.

SD: Is it hard to strike a balance between grandiose ambition and simplicity?

PW: It can be. But I don’t think we really had to make those decisions on this record. I think they were pretty obvious choices from song to song… Songs kind of take the road they’ll take. So in that sense, it was relatively easy.

SD: Is there more falsetto on this record than your previous albums?

PW: I don’t think so. I actually thought there was less. Maybe my medium range before sounded more falsetto. But there’s no conscious decision. It’s more about what makes you feel good. If it makes you feel good, it’s probably the right thing. But if anything, I try to hold back on falsetto and save it for the moments I really need it.

SD: So, the name of the band is actually “Patrick Watson.” You know that’s seriously confusing, right?

PW: [Laughs] I know, I know. When this project started, I really didn’t think we were going to be a band. I was writing music for sort of a soundtrack gig, which is more what I wanted to do when I started, as opposed to being in a band and a singer. So we did this one show at an old porno theater, and everybody wanted to see the inside, so there was a line out the door. It was really successful, so we just kept playing more shows. And eventually it sort of became a band. But we could never agree on a band name and, at a certain point, people started to know us by “Patrick Watson.” So we got kind of trapped with it.

SD: The end of “Lighthouse” has a very spaghetti-Western feel. I gather you’re an Ennio Morricone fan?

PW: Yes. That is correct. We were driving through the desert in Utah and we stopped at this gas station. And this crazy guy pulls up in his Jeep and gives us a 20-minute monologue, as if it was written for a Coen brothers film. It was like a “that would never happen in real life” type of speech, you know? And then he peeled off. So later that day, at sunset, we reached the Grand Canyon and were listening to Morricone, and the whole day just left this impression in my ear I don’t think I can ever get rid of.

SD: Moments like that must be some of the better parts of touring.

PW: When you’re lucky on the road, you get that. But being in a van for 10 hours can be a terrible thing. [Laughs.] My girlfriend is giving me a face, like, “Uh, yeah.” [Touring] is not the most normal existence. You never feel like you get anything done. You sit around all day and then you play a show. It’s like a never-ending Friday, and Saturday and Sunday never come.

SD: You’ve had songs placed in TV shows and commercials, yet you’re still well regarded artistically. How do you balance commercial viability and artistic integrity?

PW: Everybody knows that with record sales the way they are, if you don’t do those things, you’re in deep trouble. I imagine most people understand that. TV is kind of like the new radio. You try to draw limits and not lend your music to things you really don’t like. You try to live from a moral point the best you can in this kind of world. Because at a certain point it affects your music and makes your music sound cheap. That’s the balance.

SD: How did you get hooked up with Andrew Bird?

PW: We met in Australia, actually. We were on a beach playing Ultimate Frisbee.

PW: You know, I don’t remember. I know he had a sore foot, so he might not have been in full form to super-compete.

SD: Is this really the first time you’ve played Burlington?

PW: It is! And that’s so ridiculous. I’ve always wanted to play Burlington. My parents used to bring me there a lot when I was a kid. And it boggles my brain that I’ve been all the way around the world but not to the city two hours away from me.

SD: Seriously, dude. So, who are some Montréal bands we should keep an eye on?

Patrick Watson open for Andrew Bird at the Higher Ground Ballroom in South Burlington this Friday, July 20, at 8 p.m. $32/35. AA.