One Fish, Two Dozen Fish (and a Turtle) Rescued From Burlington Fountain 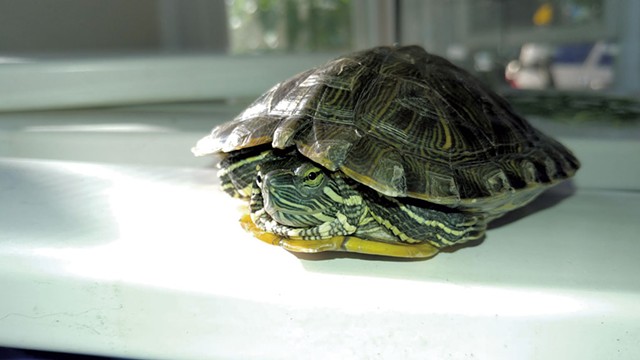 The concerned citizen on the phone described a scenario JoAnn Nichols had never encountered.

A couple dozen goldfish — and a turtle — were swimming in the fountain in Burlington's City Hall Park. Could Nichols, a wildlife removal expert, fish them out?

The fountain hadn't been in use because the city is preparing to begin construction on the park. Instead, it was filled with six inches of stagnant rainwater. A city parks employee tagged along with her last week to drain the fountain.

Nichols scooped out some coins, a locket, a die and a cellphone — along with 24 fish and a red-eared slider turtle. All were healthy, though the terrapin had "shell rot," a common condition caused by constant submersion in water.

Red-eared sliders are semiaquatic, "so they do need to be able to haul themselves out on land and be able to bask to regulate body temperature," Nichols said. "And this turtle wasn't able to do that."

"He'll heal from that really easily," she added.

A group of homeless folks hanging out in the park told Nichols that they had purchased the pets and put them in the fountain. But because none of them could prove it or adequately care for the pets, Nichols took the creatures home. She's trying to adopt them out through the Humane Society of Chittenden County, an organization with which she works part time as an investigator.

There've been no takers yet, though one person offered to help pay for the animals' care, according to Nichols.

"Lots of times I'm working with wildlife that have gotten themselves into situations that are kinda funky," said Nichols, who operates a business called HEART Wildlife Removal. "So I'm used to dealing with trying to sort things out."