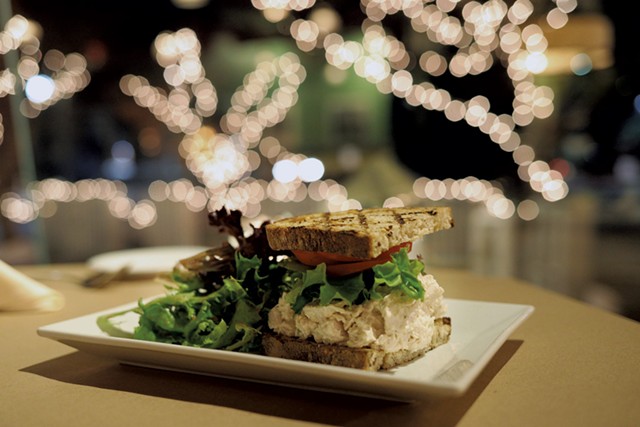 John Quimby opened White River Junction's original Tip Top Café in 2001 with a counter-service menu of coffee and snacks. In 2004, he sold the business to Bruce MacLeod — now of Norwich's Carpenter & Main — who sold it to a guy named Eric Hartling a year or so later. That's when Eileen McGuckin came in; she managed the place for Hartling for five years, then purchased it in 2013. Over time, McGuckin upgraded the service style and the cuisine. In summer 2017, she changed the restaurant's name to Thyme.

Through it all, a few perennial plates — tomato-basil bisque, sesame-pork-and-ginger meatloaf — have anchored the bill of fare. These kept things familiar to regulars as the restaurant evolved from a coffee shop to a sit-down lunch and dinner spot. At noontime, the tarragon chicken salad is one of those permanent dishes.

"It's just a classic," McGuckin said of the mayo-slicked chicken, adding that many of the restaurant's regulars order it on every visit. At one point, she said, "We tried to do more southwestern-style flavor [chicken salad], and we ended up going back to the tarragon."

The owner couldn't say where the dish originated or who developed it. A common plate at cafés in the 1980s and '90s, chicken salad was on the menu when she joined Tip Top. It remains more or less unchanged. "It's my go-to [order] whenever I'm working," McGuckin said. "I've always been a big fan."

During a busy lunch last week, sun streamed through the restaurant's floor-to-ceiling windows as families — many treating college-age young adults to a casual but well-crafted pre-Thanksgiving meal — filled up the tables in the airy dining room. In front of many diners was the herb-scented chicken salad, which is available as a freestanding entrée with greens, as a sandwich, or in a soup-sandwich combo.

Anticipating the upcoming holiday feast, I opted for the greens version, which presented an ample plate of tender roughage and a neat column of mayo-dressed chicken topped with an arrangement of walnuts and a jumble of halved red grapes. And I couldn't resist ordering the crunchy, herb-scattered fries, with their velvety, garlic-laced aioli.

Sometimes chicken salad can be heavy. That's not the case at Thyme, where chef Francisco Guerra, who joined Tip Top as a sous chef in 2016 after nearly two decades cooking at Simon Pearce, cuts the fat with a squeeze of lemon and a dash of cayenne. Shallots add quiet pungency, while diced celery gives crunch.

The dish begins with fresh chicken breasts, which the cooks poach in stock with herbs, lemon and white wine. After the meat cools, they cube and toss it with the veggies and fresh tarragon, then blend in mayo, more lemon, and cayenne and black pepper. During service, the salad is finished with walnuts, which add a touch of toasty texture, and halved grapes, which pop with sweetness.

It's one of those simple little plates that adds up to more than the sum of its parts. I guess that's how something as basic as chicken salad goes from being a dish of its era to an enduring classic.

The original print version of this article was headlined "Tip Top"