One Dish: Sampling the Biscuit Spread at Bristol’s Minifactory 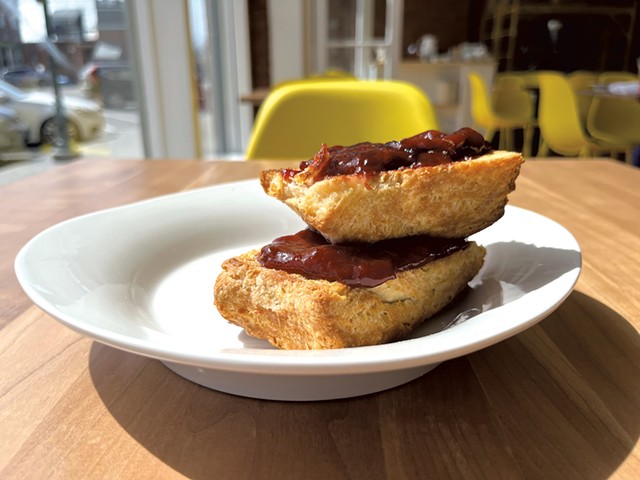 Each time I've stepped into Minifactory in Bristol, I've discovered a new delight. On the café's bustling opening day on March 20, it was a hot-pink bundle of rhubarb, tied with a delicate string.

On Easter, I stopped by for coffee and flaky pastries — both savory and sweet — and impulse-bought a container of marinated Chioggia beets. On my third visit, it was the buttermilk biscuit.

The new home of V Smiley Preserves in the former Bristol Cliffs Café at 16 Main Street packs a lot of produce into its all-day menu; into "big, bomb salads," as owner V Smiley called them; and into vegan soups and fruit-topped waffles. The menu changes every couple of days, based on staffing and how things sell in Minifactory's retail grocery section.

The multilayer business model allows a lot of flexibility. If there are tomatoes left over from the tomato toast or in the retail section, "I have the ability to move them into jam, which is kind of a superpower," Smiley said.

Jars of that award-winning jam line the far wall of the café, which has been meticulously renovated into a bright, white space. Pops of yellow come from the lemon-colored chairs and the sun beaming through massive windows.

Smiley's honey-sweetened preserves — in flavors such as Seville orange, cherry-rosehip-hibiscus and classic raspberry — play a starring role on Minifactory's menu, but the best supporting actor is the biscuit.

"Biscuits and jam, can't go wrong," Smiley said with a laugh. "We needed to have some sort of jam vehicle, and something comforting, since this is such a community space. The biscuits do that job."

The biscuit harkens back to Smiley's 2018 "Friday Mornings at Tandem" collaboration with Brooke Wilcox. "She had an awesome recipe," Smiley said. "That was the inspiration."

At first, the Minifactory team used the recipe from chef Kelly Fields' The Good Book of Southern Baking. Now pastry chef Rachel Cemprola gets the credit. Her biscuits are huge, and four to six turns during the lamination process give them lift.

The result is both hefty and light — crunchy on the outside, fluffy inside. Minifactory is already selling 400 biscuits a week, offered with a choice of V Smiley Preserves ($6.75); with jam and soft cheese ($8.75); or as a sandwich ($12) with peach-pepper-tomato jam, egg, ham, briny vegetables and pimento cheese.

"They're pillowy and absorbent," Smiley said. "Bread is wonderful, but it can be a little hard on the mouth. I like the pleasant textures you can achieve with a biscuit — it's a soft crunch and crisp."

I opted for a simple smear of Cornwall plum jam. The rectangular biscuit came sliced in half, each side slathered, with one half jauntily stacked on top of the other.

I could have cut into it, as the biscuit was brought to my table with silverware and a cloth napkin. But something about the stack made me pluck the top half right off and dive in, ignoring the jam that coated my hands.

"One Dish" is an occasional series that samples a single menu item — new, classic or fleeting — at a Vermont restaurant or other food venue. Know of a great plate we should feature? Drop us a line!

The original print version of this article was headlined "Jam Session"