Jim Morrison is the guardian of records at Canteen Creemee Company. He's shirtless, wearing a string of beads, looking cooler than cool on the cover of The Best of the Doors. The empty album cover is set in CCC's west-facing window to protect other LPs in the collection from melting in the afternoon sun.

Charlie Menard is the guardian of fried chicken at CCC. He's chef-owner of the Waitsfield snack shack that makes masterful creemees: big, trippy creations, like a Doors album.

The former executive chef of the Inn at Round Barn Farm, Menard opened CCC in the spring of 2016. The creemees are its decadent delight, but serving road-trip-worthy fried chicken was a driving force.

"That was definitely the cornerstone of the menu," said Menard, 49. "I wanted [fried chicken] to really be our thing."

A longtime fan of New England snack shacks, Menard used to ride around the region's seacoast by motorcycle or Volkswagen camper in pursuit of fish-fry excellence. When he opened his roadside eatery in the Mad River Valley, he was determined to treat fried chicken with a similar reverence. Our family makes an annual pilgrimage, or two, from Burlington.

Menard butchers whole chickens and marinates the pieces in a bucket of buttermilk. Before deep-frying the meat per order, he coats it in a dredge whose ingredients he will not reveal. He will say it's a complex and well-considered recipe that consists of "things I've carried around in my back pocket or the back of my head a long time."

The length of Menard's ingredient list rivals the number of items reportedly used by the late Colonel Sanders for his Kentucky Fried Chicken, he said.

"The dredge mix is a big recipe R&D thing for us," Menard explained. "We set out in the very beginning to build the best dredge mix that we could possibly come up with — the perfect crunch, the perfect flavor." 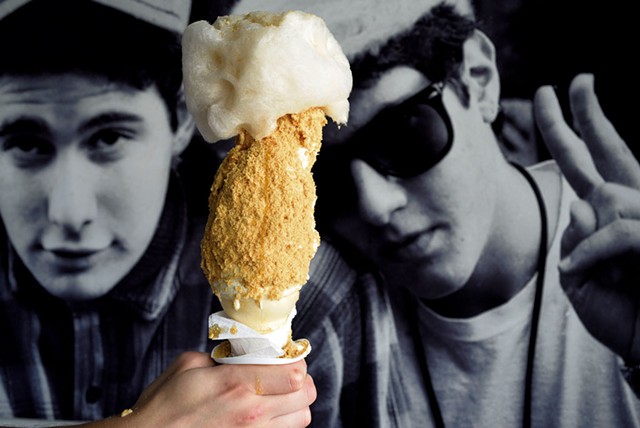 The chicken is served in a box with a side of coleslaw and dipping sauces: ranch, Sriracha butter or both. Pickle slices and a few dilly beans are scattered among the chicken pieces. Griddled slices of corn pudding, a moist and crispy riff on corn bread, are an ideal counterpoint to the chicken's savory seasoning.

Eating at Can-teen Creemee Company, which is situated in a strip mall that swallows up land in one of Vermont's most scenic settings, is a Technicolor experience. Good-time sounds come from the turntable in the window and from kids playing on a grassy stretch in the parking lot. Grown-ups indulge in onion rings and lick their kids supersize creemees to forestall meltdowns — of both ice cream and kids.

Bright-eyed teenagers, whom Menard said inspire him, take orders near a chalkboard menu that's divided into two sections: Salty and Sweet. Under the first category, fried chicken is offered in portions from two pieces for $7.50 to 16 pieces for $50. (Menard said he'll make up to 64 pieces per order.) Through the window, you can see the chef working the line. Menard and his crew serve about 300 pieces of fried chicken on a busy day.

On a recent visit to CCC, our family heard the magic word — "Sally" — over the sound system and crossed the parking lot to pick up our order. The first name-calling was for one of those trippy creemees — a maple concoction called Bad Larry ($6) that's topped with a poof of cotton candy. (We expected it for dessert, but it was served first and thus became a super-sweet app.)

A second summons was for our main course, including my three-piece fried-chicken dinner ($9.75). If the Colonel's version is finger-lickin' good, the CCC offering rises to digging-between-bones good. By this scrappy and messy method, I extracted salty pairings of sinew and fat, flesh and crispy coating. I tore off hunks of dark and white meat (my box offered both) that were seasoned and moistened by Menard's mixture, and I dunked them in classic ranch. I used lots of napkins.

Finally, we got the word to go one more time to the food window, where we received a gorgeous blueberry-lemon twist ($2.50 to $3.75) and a second maple creemee sundae. But we were too full to eat both.

I spotted four wiped-out-looking twentysomethings hanging in the parking lot and offered them the sundae. They had finished their meal and were pleased to accept more food. It was just the thing to top off a day spent "floating above" the Mad River, they said.

Before the handoff, the cotton candy toppled from the cone and landed on the grass. I went back, picked it up and made a special delivery: "This fell on the grass," I told them.

My new creemee friends shrugged it off. "I've been falling on grass forever," one of them said.

CCC is a parking-lot party for which Menard fries the chicken and spins the records: Supertramp, Billie Eilish, Bob Marley, the Doors.

"I was never a cool guy," he said. "I feel like if I were to throw a party, I'd have to worry if people are going to come. But before we open the doors, we have people waiting, and it's just so incredible to me."

The original print version of this article was headlined "Finger Trippin' Good | Checking out the fried chicken, plus sweet treats, at Waitsfield's Canteen Creemee Company"