Quentin Tarantino's Brilliant Nostalgia Trip Takes Viewers 'Once Upon a Time ... in Hollywood' 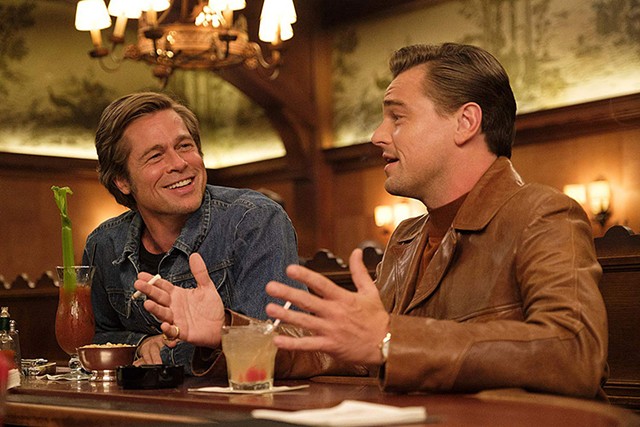 Quentin Tarantino's new film is a valentine to old Hollywood. The director casts a lingering look back at the legendary haunts: Musso & Frank Grill, Casa Vega, the studio lots where TV westerns were shot, and the mansions high in the hills from which the old guard watched the new advance. Al Pacino is priceless as an old-school wheeler-dealer, an agent surgically attached to a barroom's table phone. And, of course, these are secondhand memories. Tarantino was 6 in 1969, when his movie is set.

Given that Once Upon a Time ... in Hollywood garnered "universal acclaim," on the aggregators, and the five-star rating suggests I concur, I thought it might be a hoot to comment on the picture through the prism of one of the few pans it's gotten. Especially as the pan came from a longtime film fan who was there. Rex Reed is in many respects a Tinseltown institution as vintage as any in this picture.

Rather than recede into the past like the studio system, though, he's continued to offer his increasingly crotchety, frequently confused take on current offerings. Faux pas and snafus include calling Melissa McCarthy "tractor-sized" in 2013 and making fun of Renée Zellweger's face in his review of The Whole Truth. He has also made bizarre factual errors. The 80-year-old mistook The Shape of Water director Guillermo del Toro for actor Benicio Del Toro and claimed the filmmaker was born in Spain rather than Mexico.

"Rancid, preposterous and hysterically over the top," Reed begins his Hollywood review. This from someone who was in Myra Breckinridge (1970)! "[A]nother hopped-up fairy tale like every other Tarantino epic." Tarantino films are epic fairy tales? Who says "hopped-up"?

But there's dumber to come. "Who else," Reed asks, "would envision the historic Manson gang massacre ... as a comedy? ... I find ... any attempt to laugh off the Manson murders as sitcom fodder embarrassing."

What should embarrass Reed is his failing grasp on reality. Tarantino's latest doesn't have a sitcommy scene in it and never suggests there was anything funny about the Charles Manson murders. That's just delusional.

Tarantino revisits the waning days of the studio age, taking us down memory lane in the company of two extraordinarily entertaining creations. Leonardo DiCaprio is Rick Dalton, a veteran actor falling out of fashion as the counterculture encroaches. Brad Pitt plays Cliff Booth, his stunt double and best bro. We get an affectionate look through their eyes at the workings of an industry transitioning from the star system of Louis B. Mayer to the era ushered in by films like Easy Rider.

And, of course, we get lots of the elaborate tendrils of reference-rich talk that are Tarantino's signature. Some are melancholy. Others are funny. But none of that talk concerns the killings.

"[I]t is never clear to the viewer what anyone is saying or doing," Reed summarizes with the huff of a pensioner muttering on his way out of movie night. Reed's nostalgia for Hollywood's heyday makes him bitter. Tarantino is nostalgic and elevates that longing into a thing of elegiac beauty.

"I reject your hypothesis," the director snapped when a journalist suggested to him that Margot Robbie had too few lines as Sharon Tate (she doesn't). Reed's review is riddled with ridiculous, misguided hypotheses, including his complaint about too much "bubble gum rock" (there's none). They're spectacularly whacked. I reject them along with his disdain for the state of cinema. This is about as great as it's gotten.

The original print version of this article was headlined "Once Upon a Time ... in Hollywood"