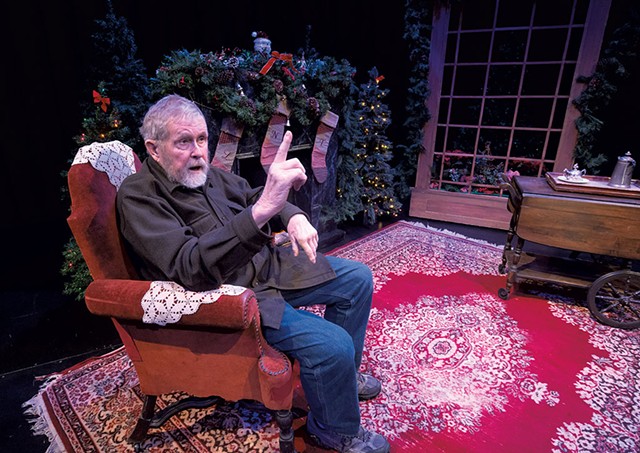 Charles Dickens' A Christmas Carol has more adaptations than most pieces of classic literature. From Bill Murray's Scrooged to the Muppets' whimsical take to the incredibly dark 2019 miniseries starring Guy Pearce, the story is almost too familiar in the Western holiday tradition. Phrases such as "Bah, humbug," "decrease the surplus population" and "God bless us, every one" are pop culture touchstones, ingrained enough to be caricature. But the story's message remains relevant with each repetition.

Every year since 1975, Willem Lange of East Montpelier has performed a public reading of an abridged version of A Christmas Carol. With his grandfatherly demeanor and impassioned delivery, the 86-year-old radio commentator, television host, writer and former remodeling contractor reawakens Dickens' classic.

In 2020, Lange brought A Christmas Carol to Montpelier's Lost Nation Theater for the first time. Pandemic restrictions ruled out an audience, but the show was livestreamed. He returns to the Capital City playhouse on Friday, December 17, this time with a small live audience. The performance will also be webcast and available on demand through Christmas Day.

"There's a Scrooge in every one of us." Willem Lange tweet this

Lange's gripping recitation includes atmospheric detail and societal context that are sometimes lost in the translation from page to screen. Most importantly, he exudes warmth and empathy for the story's coldhearted antihero, Ebenezer Scrooge, who transforms overnight from surly pinchpenny to benevolent humanitarian with help from a handful of specters.

"He was a deeply injured person," Lange told Seven Days by phone, then listed the reasons why Scrooge ended up such a nasty fellow. An orphan who struggled to find love, "He was comfortable in his miserable life," Lange said.

For Lange, Dickens' story is multifaceted in its meanings, but one theme stands out.

"No matter how big a jerk you are, there's a possibility you might be transformed," he said. "There's a Scrooge in every one of us. If only one person in the audience is stirred to generosity, that's enough for me."

Gruff but tender, Lange's distinctive voice was heard for many years in short segments on Vermont Public Radio, in which he often reflected on the natural world. His free-form column, "A Yankee Notebook," appears in regional newspapers such as the Valley News and the Barre-Montpelier Times Argus. Granite State residents will recognize him as the longtime host of "Windows to the Wild," an outdoorsy series airing on New Hampshire PBS. And children might know him as the author of Favor Johnson: A Christmas Story, a wintry picture book about a rural, Scrooge-like curmudgeon.

For his yearly tradition of reading A Christmas Carol, Lange drew inspiration from one of his college professors, Delbert Giles Lean. A professor of speech at Ohio's College of Wooster, Lean recited the story every year from 1908 to 1959, using the abridged version that Dickens penned for an American tour in the late 19th century.

Lange uses the same text — but, because no print version was available in the 1970s, he had to go through the low-tech ordeal of creating a transcript. Listening to a vinyl recording of Lean's rendition, Lange started and stopped the disc by lifting and lowering his record player's arm, copying the story bit by bit on an electric typewriter.

Initially, Lange held the readings in his Hanover, N.H., home. His late wife, Ida, would prepare a traditional English trifle (also called a "tipsy parson," Lange noted) to serve to their guests. In 1976, the event's popularity doubled, with Lange reading the story on two nights and Ida making two trifles.

"She said, 'That's it, we've got to find a bigger place,'" Lange recalled. From then on, he read the story at Hanover's St. Thomas Episcopal Church, occasionally bringing it to schools and other community gatherings.

Lost Nation is known for staging seasonal favorites in December. For many years, it produced a radio-play version of Frank Capra's It's a Wonderful Life. More recently, the company's program "Stories for the Season" showcased multicultural short works from around the world.

Last year's reading of A Christmas Carol was Lost Nation's first production since the pandemic disrupted live events. Even without an audience, Lost Nation producing artistic director Kathleen Keenan recalled, "It was so moving for us."

For that broadcast — as for this year's production — Lost Nation ensconced Lange in a full-blown set. That meant the trappings of a festive Victorian-era drawing room: a gusseted armchair, ornate rug, garland-wrapped hearth, poinsettia-lined window, side table with tea service and Christmas tree.

During last year's livestreamed performance, Lange's voice overflowed with charisma and empathy for the story's characters. With subtle adjustments to his timbre and accent, he embodied the varied London denizens that cross Scrooge's path.

He dropped into an Irish brogue as one of the gentlemen seeking donations for the poor and destitute. He nearly broke into tears when he voiced future Bob Cratchit lamenting the passing of Tiny Tim. And, as Scrooge, he captured the anguish beneath the miser's gruff exterior.

"Willem is the perfect actor-slash-personality to do this particular oral interpretation," Lost Nation president and founding artistic director Kim Bent said. "[He brings] a very pure kind of storytelling experience."

"He's very good at putting on that irascible old gentleman [character]," Keenan added. "He's kind of a throwback to another time."

Lange noted that, besides the central theme of redemption, class struggle and consumerism are particularly relevant themes in the play.

"The plight of the poor — how we treat them says a lot about our society," he said.

As a widower in his eighties, Lange noted, he's gained new insight into Scrooge in recent years.

"I appreciate how living alone in old age can be comfortable," he said, emphasizing that Scrooge achieves a miraculous transformation despite being lonely and set in his ways.

Some essayists and historians have described A Christmas Carol as the spark that reignited the public's interest in the holiday as well as the generosity, nostalgia and humanism associated with it. Lange and the folks at Lost Nation echo that sentiment.

"I think, particularly at the end of the year in the northern hemisphere, we're really returning to light and a particularly reflective moment," Bent said.

"We get so caught up in our daily lives ... It's important that we all take care of one another," Keenan said. "It's a lesson we need to learn over and over."

The original print version of this article was headlined "Good Spirits"