Art Review: “All Aboard: An Exhibition of Trains” 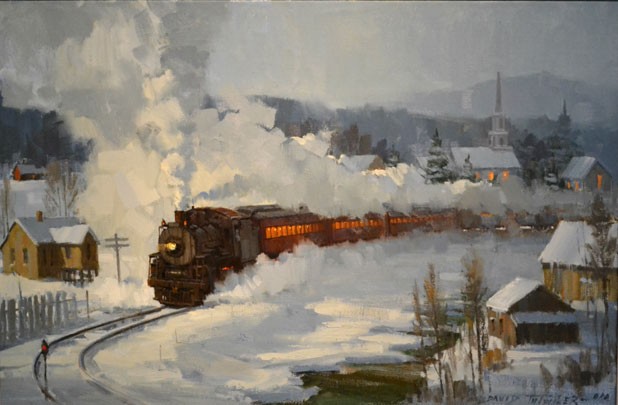 Is there anyone who doesn’t love a train? That is, aside from the auto industry and, arguably, the U.S. government? It’s a sad fact that the choo-choo has been shoved aside in this car-addicted nation. High-speed rail? Still a fantasy. But you won’t find any of that grousing at the Bryan Memorial Gallery in Jeffersonville; its current show, “All Aboard: An Exhibition of Trains,” only looks fondly to the past.

This is necessarily and unabashedly a nostalgia fest, and the curators have spared no effort in finding vintage artifacts and images to engage the historian — and send older viewers down memory lane. A couple of working model train sets provide all-ages appeal, not to mention a clickety-clack soundtrack. But the Bryan is an art gallery, of course, and so “All Aboard” is also packed with competent artworks featuring trains as central figures.

One of the most striking paintings is David Tutwiler’s “Winter Parade of Steam,” a 20-by-30-inch oil in which a train chugs through a small town — presumably in Vermont — on a frigid winter morning. Steam billowing from the smokestack envelops the long line of train cars and blurs into the snowy setting, putting the black engine in stark, dramatic relief. Tutwiler’s composition gives this unpeopled scene a subtler drama, too: The tracks curve toward the foreground, and the train is aimed directly at the viewer. One wonders if the artist — a noted plein-air painter who counts filmmaker George Lucas among his patrons — sat outside waiting for this train to come in.

Liné Tutwiler — David’s wife — is also a capable painter, and her “Green Mountain Vista,” a 20-by-24-inch oil, is another engaging glimpse at yesteryear in Vermont. Here the perspective is longer: a narrow valley whose mountainsides extend into a misty “V” in the distance. A train is distant, too, barely visible, and a river ribbons along the valley floor. A small cluster of houses clings to the hill in the foreground, on which the painter was ensconced. A tall pine, whose branches protrude into the picture at upper right, stands like a sentinel over this placid scene. Liné Tutwiler’s palette is muted; the hardscrabble hillsides are dotted with evergreens, but a knot of yellow-leafed trees suggests a not-so-vibrant foliage season.

“Night Trains” is a dark-hued acrylic tempera by gallery namesake Mary Bryan, and one of the few images in the exhibit that plainly show a downside of trains: pollution. In this urban railyard scene, smoke congests the sky in angry plumes of black and gray. The work, part of the gallery’s permanent collection, is nonetheless aesthetically arresting and a departure from the generally devotional sensibility of the show.

“All Aboard” includes many more paintings, from Colette Paul’s delicate watercolor “The New Haven” to Christopher Jenkins’ train-centric oils set in the West to Gary D. Lang’s realist train portraits. But other mediums are represented here, as well, including prints, reproduction travel posters and photographs. Among the best of the photos is David Plowden’s “Crosshead Detail CNR.” The black-and-white picture, just 11 inches square, homes right in on a photogenic train wheel and the interconnected working parts around it. It’s as easy to be awed — as Plowden obviously was — by the machine’s beauty as it is to marvel at its massive weight and well-oiled functionality. The detail alone speaks to the power of the “iron horse” and its essential role in history.

The Green Mountain Rug Hooking Guild puts the locomotive to more playful purpose. Each of 63 rugs, 18 inches square, features a circus act riding on a train car. Crafters around the region contributed these humorous and exquisitely made rugs, which portray a giraffe, a lion, a “fur lady,” an elephant and so on. One is even styled after van Gogh’s “Starry Night.” This portion of the show casts a new light on hookers.

To be sure, “All Aboard” is a scenic ride with something for everyone. But you’ll have to get in your car and drive to it.

“All Aboard: An Exhibition of Trains,” Bryan Memorial Gallery, Jeffersonville. Through April 1. bryangallery.org