On the Yak Track

Vermont agriculture's next great hope hails from the Himalayas 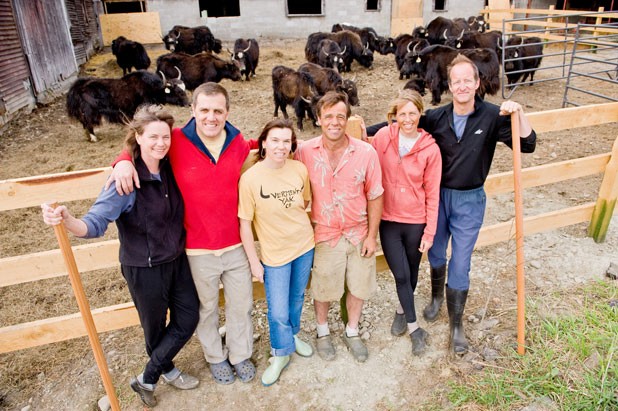 Picture three successful middle-aged couples: an IT guy and a "hockey mom"; an organic vegetable farmer and a therapist; a college professor and the director of a nonprofit organization. Now imagine these accomplished professionals chasing an escaped yak up a busy Vermont highway, or negotiating fresh manure piles as the group attempts to herd two dozen of the large, hairy beasts into a paddock for the evening.

It could be a scene from a slapstick comedy - think City Slickers in the Green Mountains - but it's Waitsfield's Steadfast Farm, home of Vermont's first, and so far only, working yak operation. Beginning this summer, the Vermont Yak Company - composed of Ted and Susan Laskaris, Dave and Paula Hartshorn, and Rob and Kate Williams - plans to introduce the unusual animal to the Mad River Valley in the form of succulent steaks, ground meat and sausages. Localvore chefs in the region are already clamoring for the unusual homegrown protein source.

Vermont's iconic cow has got competition - if Rob, a Champlain College professor and the editor of Vermont Commons, has anything to say about it. "I sort of see yaks as the quintessential Vermont bovine," he suggests. "They're really adaptable, very surefooted, fierce and protective, and they love the cold. It's a perfect fit." There are other benefits, too: The animals eat less than cows do, are strong enough to pull plows, and their meat is delicious.

"We kind of want yak sausage to be our signature," Dave remarks. VYC will also proffer hides, breeding bulls and yak hair, or "fiber," which is gathered by combing rather than shearing. Eventually, the group may venture into yak dairy, but can't currently afford the necessary infrastructure.

Last fall, Rob and Kate cooked up the idea of bringing a small herd of Himalayan mammals to Vermont after sampling the meat on a trip out West and getting a solid endorsement from their two young children. "They just loved it," Kate recalls. "Our kids aren't picky eaters, but they don't always ask for seconds, thirds and fourths."

Upon their return, the couple happened upon a deeply tanned farmer and former "marketing guy," Dave Hartshorn, sipping a beer at Waitsfield's Big Picture Theater and Café. They tentatively approached him and told him about their scheme. To Kate's surprise, his curiosity was piqued. "He took a shine to it right away," she recalls.

Hartshorn - who grows organic vegetables for a small CSA and area restaurants such as The Common Man and American Flatbread - had never considered going into the yak business. But he had been yakking with his neighbors, the Laskarises, about ways to bring animals to their land. "Farms without animals are missing something," Hartshorn muses. "They make fertilizer to go on the vegetables. It's a full circle."

It was more than a desire for compost that motivated his animal interest. The Laskaris barn and acreage used to belong to his family - it housed his father's dairy cattle until the elder Hartshorn sold his herd during a government buyout 20 years ago. "Ted had asked what he should do with the farm," Dave remembers. Excited by the information provided by Rob and Kate, Hartshorn pitched the concept to Ted and Susan.

In late August 2007, the six prospective business partners met for a special yak dinner "Chez Williams." There, the lean yet tender, dark-red meat was showcased in four different ways: meatballs with lemon and parsley, burgers, shish kebab and a Vermont-style maple-glazed tenderloin with squash and potatoes. At some point that evening, Ted confessed to Kate, "You had me at the very first meatball." And so the Vermont Yak Company was born.

Unlike the Vermont Water Buffalo Inc., which has nearly 700 beasts, VYC is starting small. Last November the partners put a down payment on 20 purebred yaks - thanks to a few new calves, the number has since increased to 24 - which arrived in Vermont via a massive semi last week.

In just a few days, the adults and their six kids have begun bonding with the creatures: "We've already started appreciating their personalities," Kate explains. "We know who hangs out with whom. And even the youngsters can point each yak out by name: Jet Black, a massive bull, is the leader of the pack. Christine, the lady who took a jog up Route 100, is a sassy troublemaker.

There's another group of Vermonters who may feel an affinity with the Steadfast herd: The 130-plus Tibetans who reside here. Dakpa Gyatso, president of the Tibetan Association of Vermont, is exuberant about the bovines. "The yak is very smart and it's a very clean animal," he exclaims. In Tibet, "we use the yak meat and the yak milk; we use the yak skin for shoes and for small bags and saddle bags." The tail hairs can be turned into brooms; the hair is used for clothing and the hide for tents. Gyatso is enamored with the yaks' physical strength, too: "If they're angry, it's very bad," he says. "They're very strong. Even leopards cannot kill the yak." Gyatso should know. He spent his youth helping his family care for a herd of 80.

According to Rob Williams, the VYC reached out to another member of the Tibetan community last winter to let him know that Vermont yak meat is on the way. Gyatso just learned about the farm and is enthusiastic about trying the local meat. So is Tenzin Chophel, the owner of Yak Adventure in Middlebury, who grew up in India and sampled yak meat for the first time on a trip to Nepal. "I think I will try it," Chophel promises. "It might be a little bit different taste because it's grown in the USA."

Chophel has one concern, though. He's worried about how the animals will deal with the warm summers. "They like cool places," he remarks. "At a Tibetan culture festival in Washington they brought a few yaks, and all the yaks got too hot."

Rob is convinced that the shaggy beasts will adore the harsh Vermont winters and will do just fine during the summer - after all, the herd originated in Minnesota, at a similar latitude. Gyatso agrees. "The temperature and climate are OK for a yak," he declares. "It's grassy, and the grass is very green."

Tourists driving up Route 100 may be startled to see Vermont's verdant pastures dotted with exotic-looking animals more akin to the slopes of the Himalayas, but inspiring curiosity is part of the business plan: The VYC partners are hoping agritourism becomes a significant portion of their business. They've got plans for yak merch, including T-shirts emblazoned with the company's logo.

Deputy Secretary of Agriculture Anson Tebbetts is "excited" to learn more about what the new entrepreneurs at Steadfast Farm have planned. He views the diversification of animal agriculture in the Green Mountains as a good move. "We had the first water-buffalo dairy in the country. We've got emus, we've got elk; I think we have some reindeer," Tebbetts says. "It's a good thing for the state to have a wide array of different operations. We want to see as many animals as possible on the landscape because that enhances Vermont," he adds. "Our visitors like to see our landscape and like to see our animals."

You can get a good look at the animals in their paddock, which is hung with colorful Tibetan prayer flags. Up close, it's evident the yaks are smaller than cows, with big, expressive eyes and a little bit of 'tude: If they think you're making a move towards their young, they'll tilt their heads aggressively and let you see their horns - both males and females have them. Their thick, outer fur is coarse, like something you'd use to scour dirty dishes. It's the animals' silky under-fur that is used for clothing. "They're beautiful-looking," Gyatso opines.

While they hope the lovely creatures will also make them money, the partners in VYC see their venture as a way to live out the farm-to-table philosophy they all espouse, and to educate themselves and their children while holding on to their day jobs. According to Paula, a licensed therapist trained in drug and alcohol counseling, "It's a total lifestyle change. I've never been so psyched to purchase a wheelbarrow."

When asked about her role on the farm, she muses, "I can shovel shit. I'm good at it. And I'm still able to remain fashionable as a farmer." Half-jokingly, Kate remarks that Paula will play an important role in the impending "first slaughter": They'll likely need to take advantage of her counseling skills to avoid the trauma. After all, three of the six business partners were vegetarian or vegan prior to becoming localvores.

Though certain aspects of operating their farm will no doubt prove difficult, the three families say they're finding spiritual renewal in their venture. When the yaks arrived, "It was almost equivalent to the day our kids were born, Kate suggests. "There's a sense of a new beginning. We're all so clear that we feel right about this. It's turned into a neat model for making things work with people who can't put everything aside to become farmers. It's a model of a cooperative farm that's not a communal farm."

"We're reinventing the agricultural model for a post-oil future," adds Rob. Kate agrees. "We're doing something in the face of challenging times. This is not the solution, but it's a way we can take action."

Even acknowledging the dire state of the climate and the United States' agricultural policies doesn't sap the new yak farmers' senses of humor. Rob boasts, "I have the very first yak poop in Vermont at my house."