On the Road Again: Shumlin's 141.5 Days Outside Vermont 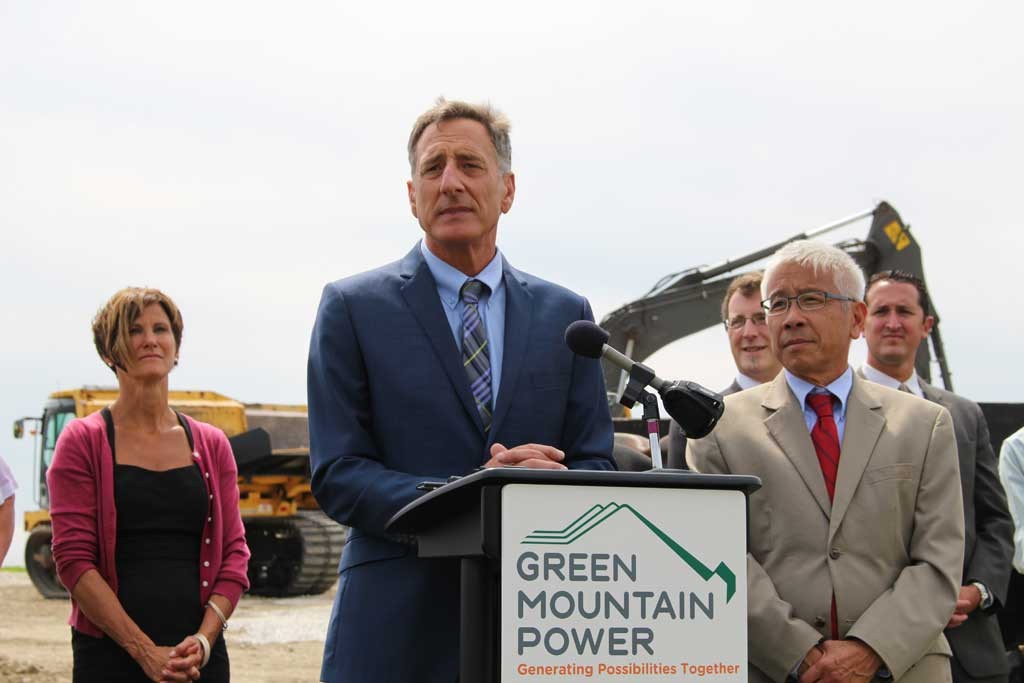 When Gov. Peter Shumlin formally launches his bid for a third term next Tuesday, he'll finally retire the dubious claim that he's too busy governing to campaign before Labor Day.

Dubious because the gov's been beating the bushes for campaign cash since March 2013 — he's raised more than $611,000 to date — and has been holding out-of-state fundraisers since June of that year.

As for all that governing? According to new data provided by his office, Shumlin has spent 141.5 days outside Vermont since January 2013. That's nearly a quarter of the 601 days that have passed since his second term began.

Lt. Gov. Phil Scott, who fills in for Shumlin in the gov's absence, says that when he first took office, he looked forward to telling people, "Today I'm acting governor."

"Now when I go to events," Scott jokes, "I usually start by saying, 'And today I'm acting lieutenant governor.'"

In the past 20 months, Shumlin has left Vermont 64 times for business, pleasure and politics, according to a Seven Days analysis, touching down in at least 18 states and four countries. (Shumlin's staff does not always disclose his precise vacation destinations, so the latter numbers could be higher.)

Very little of the governor's travel has been devoted exclusively to state business. Of his 141.5 days outside Vermont, only 14 were dedicated purely to gubernatorial or ceremonial duties, such as meeting with federal officials in Washington, D.C., or visiting regional partners in Montréal.

Shumlin spent another 12 days this term traveling to Miami, China and Vietnam, where he helped drum up foreign investment in private-sector development projects. Those trips were financed by Jay Peak co-owners Bill Stenger and Ariel Quiros, both of whom have donated thousands to the governor's reelection campaign.

The governor, who returned on Sunday from a 14-day trip to his summer home in Nova Scotia, has spent the vast majority of his travel time on vacation or conducting political business. Since January 2013, he's spent 55 days vacationing outside Vermont. That number includes 19.5 weekend days out of state, though it does not include personal time the governor has taken within Vermont's borders.

According to Shumlin spokeswoman Sue Allen, no governor is ever truly off the clock.

"With improved technology, governors easily work remotely via cellphone, computer and iPad. Downtime is seldom an option," she says. "Anyone who suggests that governors are ever distracted from state business, particularly because they aren't sitting at their desk in Montpelier, isn't familiar with the job and its demands. Travel is part of doing business."

Of course, not all of Shumlin's predecessors took as much leisure time as the incumbent has. In a new memoir released today (and reviewed on page 18 of this issue), former governor Jim Douglas writes, "I took four days off one summer and found it impossible to relax, as I realized I was missing valuable time to get things done; that was my longest vacation."

So far this term, Shumlin has spent 58.5 days, or nearly 10 percent of his time in office, tending to political affairs outside Vermont. Much of that's been devoted to his duties as chairman of the Democratic Governors Association, a position he won in December 2012.

As Seven Days reported in March, Shumlin has made a practice of raising money for his own reelection campaign while traveling on the DGA dime. According to state law, he's required to report such travel as an in-kind donation to his campaign, but he does not do so.

While the state always foots the bill for the governor's security detail, taxpayers are not supposed to pay for his political travel. But as Seven Days reported in August 2013, even that line is occasionally blurred.

That month, the gov's public schedule listed him as traveling to Washington, D.C., to deliver a speech at a U.S. Agency for International Development summit. While inside the Beltway, Shumlin also wined and dined a prospective DGA donor, his staff later revealed, but the state paid the $377.80 tab for his plane ticket — plus an undisclosed amount for security.

Similarly, the state occasionally pays for Shumlin's travel to conferences held by the nonpartisan National Governors Association, even though those trips usually also include partisan press conferences and fundraisers held by the DGA.

Allen, who previously served as spokeswoman for former governor Howard Dean and as a reporter and editor for the Associated Press, the Burlington Free Press and the Barre-Montpelier Times Argus, says there's nothing atypical about Shumlin's travel — or his extracurricular activities.

Douglas, Dean and former governor Dick Snelling all served as chairmen of the NGA. Dean also chaired the DGA and Snelling the Republican Governors Association. As Dean's 2004 presidential campaign geared up in 2002, near the end of his final term as governor, he was criticized for his frequent travels to Iowa and New Hampshire.

"As someone who has worked for two governors and covered three others as a journalist, I can assure you that all governors — Democrats and Republicans — work 24 hours a day, 365 days a year, whether they are in the state or traveling," Allen says. "That's a reality they understand when they agree to run, and many potential candidates choose not to seek the office for that very reason. There is no distraction from state business or duties."

But Scott Milne, who last week won the Republican nomination to challenge Shumlin this November, disagrees. He says Shummy's spent too much time away from the Green Mountains.

"I don't know what he's doing all that time, but for a governor who as recently as four weeks ago said he's working 24/7 for the people of Vermont, there seems to be at least a contradiction, if not hypocrisy, in those travel numbers," he says.

According to Milne, Shumlin should be spending more time working to fix Vermont's troubled health insurance exchange, addressing leadership challenges at the Agency of Human Services and overseeing the state's EB-5 investor visa program. Just last Friday, on the eve of a holiday weekend, the administration released an independent report blaming Vermont Health Connect's woes on the state's "lack of project ownership and [contractor CGI's] lack of accountability."

"It seems like when you're gone 25 percent of the time and things are going wrong, there's a perception there's a connection there," Milne says.

Shummy's not the only one racking up the frequent flyer miles.

Sen. Bernie Sanders, who's considering a run for president in 2016, is seriously ramping up his travel to early primary and caucus states.

After receiving the American Legion's Patriot Award at the organization's national convention in Charlotte, N.C., last Wednesday, Sanders held subsequent town meetings in Raleigh, N.C., Columbia, S.C. and Jackson, Miss. He also made time for meetings with AFL-CIO leaders in Raleigh and Columbia and spoke at a press conference outside the South Carolina Statehouse, urging the state's political leaders to expand Medicaid coverage.

"It's no secret that I am giving some thought to the possibility of running for president, and that's one of the reasons for getting around the country," Sanders said Monday at Burlington's Labor Day celebration in Battery Park.

So, did the senator sense a yearning for a Sanderista revolution south of the Mason-Dixon Line?

"All I can tell you is that, at this point, the turnouts we had were really good," he said. "Those states are where the economy is really bad. Many people are hurting. And I think the theme that I'm hearing there and all over this country is people have got to stand together to fight for the middle class in this country, which is disappearing."

Two days after his Mississippi town hall meeting, Sanders made his third trip this year to New Hampshire, home of the nation's first presidential primary. The senator spoke at the AFL-CIO's Labor Day breakfast in Manchester early Monday.

Next week, Sanders heads to the first-in-the-nation presidential caucus state — Iowa — for the second time this year. While in the neighborhood, he'll also drop by the Fighting Bob Fest, a progressive gathering in Baraboo, Wis., and host a fundraiser in Madison.

The proto-candidate has at least two more trips on the docket: On September 27, he'll keynote the Strafford County Democrats' annual dinner in Rollinsford, N.H., and on October 5, he heads back to the Hawkeye State for a third time to address a Johnson County Democratic Party barbecue.

That's a lot of time in Iowa for, well, anyone.

Fill in the Blank

But Corren's Republican opponent, Lt. Gov. Scott, didn't do so bad himself.

The final tally shows 3,874 voters, or 60.5 percent of those who took the Democratic ballot, wrote in Corren's name. Another 1,895, or 29.6 percent, did so for Scott. The former publicly campaigned for the Democratic nomination, while the latter did not.

Among the other notable results finalized Tuesday:

With 71.7 percent of the vote, Milne won a decisive victory for the Republican gubernatorial nomination. But Dan Feliciano, who mounted a last-minute bid for the GOP nod, did pretty well for a write-in: He picked up 2,093 votes, or 13.1 percent. That's a problem for Milne, because Feliciano's staying in the race as the Libertarian nominee.

Shumlin faced only token opposition in his party's primary, but a full 23 percent of those who cast a Democratic ballot chose someone else. It's still unclear how many of the 6.9 percent of write-in votes cast went to Doug Racine, Shumlin's recently fired Agency of Human Services secretary.

With just 33.7 percent of the vote, Mark Donka, the GOP's 2012 congressional nominee, narrowly beat out two other candidates for a rematch against four-term Congressman Peter Welch (D-Vt.).

Attorney General Bill Sorrell wasn't so lucky. He'll face Underhill attorney Shane McCormack, who jumped into the Republican primary at the last minute and won the nomination with 794 write-in votes.

Now, with the primary out of the way, we can turn our attention to what promises to be an exciting, dramatic and unpredictable general election season.