On the Rise: Liberty House Opens in Burlington 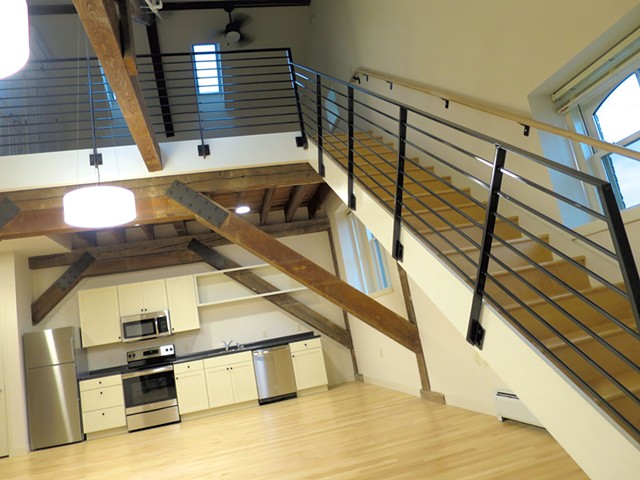 Whatever Burlingtonians might think of the city's largest-ever planned housing development — the 14-building, 739-unit Cambrian Rise at 329 to 375 North Avenue — it's hard not to admire its first finished building.

Liberty House, as developer Eric Farrell named it, has amazing lake views; a separate bike entrance with indoor bays for tuning, washing and storing bikes; a pet wash-and-dry room beside the main entry; free laundry machines; a craft room; a gym; a CarShare Vermont car named Rufus, for which one-year memberships are subsidized for all residents; and a common-area rooftop veranda with expansive views of the lake in both directions.

But what makes Liberty House a stunner, arguably, is the building itself. Built by the Roman Catholic Diocese of Burlington in 1882, the former Providence Orphan Asylum — named for the Sisters of Providence from Montréal who cared for the children — is a four-story, red brick structure spanning 170 feet. Bands of white on the façade run the width of the building, visually linking each floor's arched windows. The building's redstone foundation is so high that the first-floor entry was once reached via a sweeping stone staircase. Chimneys have disappeared, but a stately cupola still tops a roof lined with attic dormer windows.

The orphanage, renamed St. Joseph's Child Center in 1962, served children for 100 years, from 1884 through 1983. It also housed a bishop, starting in 1978, and the church's administrative offices, starting in the early 1980s, until Burlington College purchased it in 2010. When the college closed in 2016 — school officials cited the weight of debt from the land and building purchase as a major cause — the building was showing signs of neglect.

Farrell engaged Duncan Wisniewski Architecture to restore the building's exterior largely to its original look. Architect Taryn Barrett, who worked with Bob Duncan on the project, says the team found ghosting of the original street-side entry canopy after removing a glass-enclosed, A-frame front entry that had been added in 1962. They used historic photos to re-create its massing and to rebuild the curved double staircase. One of those photos, showing the steps filled with children in 1954, is framed inside the street entrance. 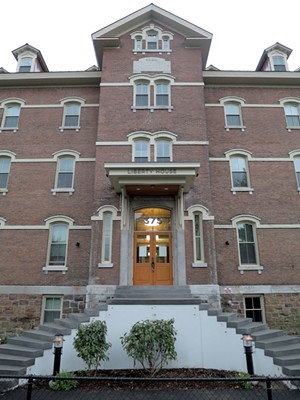 Barrett was thrilled to tackle the project. "There aren't a lot of opportunities to work on a building like this. The scale and mass of it are pretty grand," she enthused.

Farrell showed this reporter around, starting at the back of the building, which is now the main entrance. The structure was in "great shape" when he bought it, he said, but the brick needed "a monster amount of re-pointing." He showed that the project had replaced all of the single-pane windows with double-panes and had added windows to former boys' and girls' bathrooms on each floor. Forty-two skylights were inserted, including in the chapel wing, which projects westward toward the lake. And the gabled roof of that arm of the building was sliced off to install a veranda. A shorter, private veranda for the cupola apartment hovers above.

When Laura Trieschmann, the state historic preservation officer, saw the verandas, she was initially alarmed — until she got closer, and then stood on them. "You see why he did that," she said appreciatively.

Preservation review of Liberty House hadn't originally been required. It comes into play when Act 250 is required, and the latter doesn't apply to developments in designated Neighborhood Development Areas, of which the orphanage was one, with fewer than 275 units. When Farrell's plan expanded to 739 units, requiring Act 250, rehabilitation of Liberty House was largely complete. But Farrell invited Trieschmann and Jamie Duggan, the state senior historic preservation review coordinator, to include the building in their assessment of the entire development. Preservation's involvement protects the building going forward, requiring future changes to undergo review, noted Duggan.

Trieschmann and Duggan said that changes such as the verandas may not have passed muster as constructed had Liberty House been reviewed as a preservation project. But in general the two were admiring. "I thought it was a wonderful solution to get a very large building back into service and to provide housing," said Trieschmann.

Inside, nearly every inch of the available 55,000 square feet has been used, including the former attic. The building contains 65 apartments, of which 50 have been rented. In two attic apartments, exposed, massive beam trusses — formerly visible only when storage was accessed — now add visual interest; some horizontal, structural beams at floor level are capped with benches. The basement level, formerly the orphanage's laundry and utilities space and now an appealingly furnished entry lobby, is lined with metal columns topped with ornate capitals.

Original wainscoting lining the main floor's hallway was regrettably stripped away, said Barrett. But the change exposed 13-foot-high red-brick walls, topped by a wooden ceiling restored during the project. (Another floor's pressed-tin ceiling was also preserved.) Original door openings weren't wide enough to meet current accessibility codes, so the architects had them closed up, using bricks removed from walls to create openings for new doorways. Bricks where doors used to be are recessed by one inch, indicating the floor's original layout. 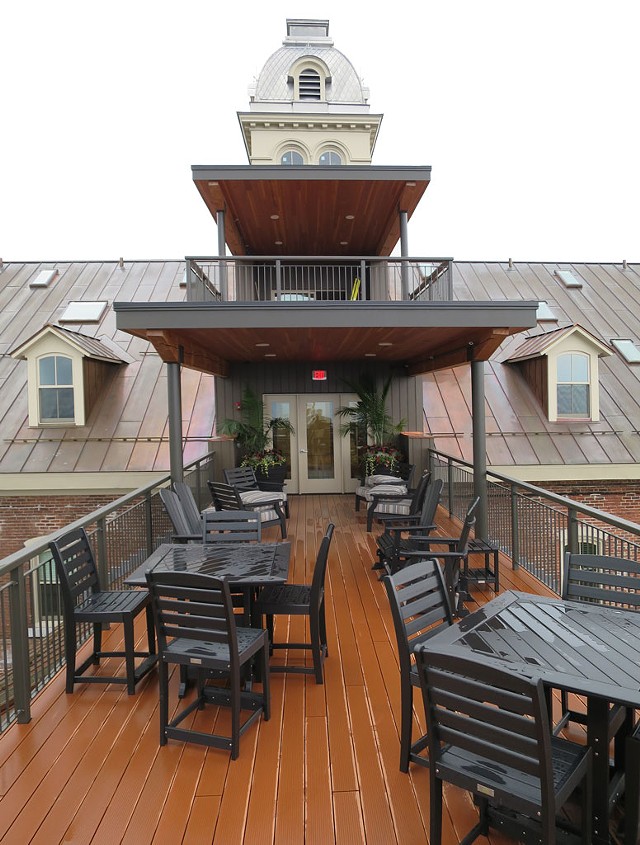 The brickwork won over both preservation officers. Said Duggan, a former bricklayer, it shows the building's "embodied energy — the amount of effort it takes to make bricks, dig up the clay, fire them, lay them. The walls get to tell you that themselves."

For Trieschmann, the setbacks leave intriguing traces of the building's history. "It's documented right there," she said.

At the suggestion of his friend Charlie Pughe, Farrell named Liberty House after a ship that Benedict Arnold confiscated from the British. The building has stood solo on its promontory overlooking Lake Champlain for 135 years. It's now set to weather many more years of use — but no longer alone. As buildings rise around it, its view and anchor position in the development will be maintained, according to site plans, but it will inevitably lose some of its solitary grandeur.

Yet the former orphanage could have been abandoned to neglect. Farrell hadn't planned to buy it; the banks required him to append it to the land deal when Burlington College's viability came into question. And rehabilitations cost more than a new building, said the developer. Farrell's projects include the Olympiad, a residential building in South Burlington that is also 55,000 square feet on five floors. That building cost 30 percent less to build from the ground up than the orphanage cost to rehab.

Asked how he felt about spending that much on Liberty House, Farrell answers, "It was too spectacular not to."