On the Record: DJ Craig Mitchell is behind Burlington's newest record store... and a hit dance song by Yoko Ono 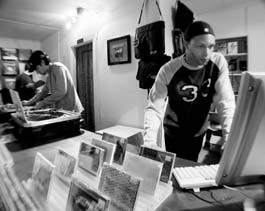 It’s been more than a decade since electronic beats filled the dancehalls of London and Berlin, revolutionizing the dance-music culture of Europe and elevating the deejay to the same holy status usually reserved for rock gods. For the first time since the saccharine days of late-’70s disco, people flocked to dance clubs, each boasting his or her own outlandish take on the burgeoning movement. In the scene that blossomed around new music, personality and panache — of both deejays and audience — became the rule.

After initial resistance, Yanks now have caught the beat as well. National artists like Moby and Fat Boy Slim have achieved massive commercial success on pop radio, and deejays like the U.K.’s Paul Oakenfold and Sasha & Digweed jet around the country for residencies at the country’s top clubs.

In Burlington, several nightspots — including Ruben James, Millennium Nightclub, Rasputin’s and Club Metronome — have embraced the trend, thanks to the availability and musical variety offered by a growing posse of talented local spinners.

As if on cue, the urban music shop Joyryde Records appeared in Burlington around Thanksgiving. Co-owned by Steve “Stavros” Mitchelides, 24, and popular former Burlington deejay-singer Craig Mitchell, 30, Joyryde provides a direct link for Vermonters to the dance scene of the Eastern U.S. and Quebec. Upstairs from Speeder & Earl’s on the Church Street Marketplace, their 500-square-foot shop stocks brand-new vinyl and a small selection of handpicked used records.

“Most regular customers stop by probably four times a week,” informs Mitchelides. “Unlike many stores that have new orders released once or twice a week, we have new records each day.” Turntables are set up for previewing tracks, so the latest sounds are constantly pulsing out of the shop’s ample sound system.

The record shop is just the latest enterprise for Joyryde, a 4-year-old “music marketing company specifically focused on dance music,” explains Mitchelides. He and Mitchell have a collective 15 years of deejaying and dance promotion experience. Last April, they began selling records online at joyrydestudios.com; Internet sales comprise 10-20 percent of Joyryde’s business, nearly all to international buyers. The retail store is an offshoot geared to supplying local dance denizens.

“The record store provides deejays with a chance to not only buy records, but to sell tickets and promote local events,” explains Mitchelides. It “gives a base for the entire northern New England dance scene.”

The key to success for a niche-product shop in a small market lies in their ability to mesh perfectly with the interests of Burlington deejays and fans, he notes. “When you can buy any one of the 500 records that get released each week, you need to know what’s hot for your area.” Mitchell and Mitchelides closely follow musical trends percolating from urban areas into the ears of Burlington ravers.

Accordingly, Joyryde specializes in providing Vermont’s electronica community with hard-to-find records and deejay equipment. Mitchell, currently residing in New York, handles the purchasing and ordering of records from dance-friendly Manhattan. All genres of electronic music are represented, but you’ll have to look elsewhere for cheese-pop club anthems or the latest teen sensation. “Joyryde has always been top-of-the-line,” asserts Mitchelides.

The Joyryders stay on top by juggling multiple projects. Along with Capacitorsounds, headed by Burlington designer-promoter Josh Brown, they have developed the “Lifted” dance showcase at Higher Ground. Launched in 1998, the 22nd event takes place at Higher Ground at the end of this month. Dedicated to bringing internationally recognized deejays together with Vermont’s own up-and-coming artists, “Lifted” has experienced a jolt in popularity — the last few all-nighters were sold out.

Maintaining connections with his old hometown, Mitchell has recently returned to the deejay booth every other Friday at Club Metronome in Burlington. But it’s hard to know how he fits those gigs into his almost frantically busy schedule in New York. Mitchell and Orange Factory — his Hoboken-based recording studio-musicians collective — have just finished remixing a classic Yoko Ono single that quickly climbed into the top 20 on the Billboard Dance Charts.

“Open Your Box” was banned from airplay upon its original release in 1971 for sexually suggestive lyrics, but times have changed, and Mitchell has transformed the song into a writhing dance-floor anthem. The remix, released early last month, has given Ono the first charting single of her long musical career. Mitchell layers her primal moans over a propulsive synth sputter that builds amidst clanking, metallic rhythms to multiple orgasmic climaxes.

Pleased with the success, Ono and Mitchell are working together through the latter’s new imprint, Mind Train Records, on producing remixes of at least three more of her older tracks, updated by various contemporary deejays.

Solid workaholic attitudes are paying off as the Joyryde empire continues to grow. Mitchell and Mitchelides both deejay, and the company is busy with marketing and artist promotion from Montréal to Miami. “Joyryde is one company doing everything we can get our hands on,” confirms Mitchelides.

The partners are confident that Burlington can develop a vibrant dance scene. “It’s really exciting to watch,” enthuses Mitchell. “People are starting to realize that deejays are not just jukeboxes. A deejay is just as important and creative as a guy on stage playing guitar.”