On the Paper Trail 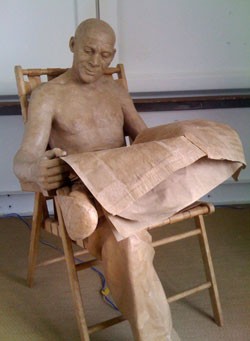 An exhibit this season at the Shelburne Museum gives paper cuts a good name. “Paperwork in 3D” features the mind-boggling sculptural works of 25 nationally known artists, and it is a testament to their resourcefulness and patience as well as skill. This is artwork descended, as it were, from trees — with any number of books, maps, newspapers, magazines and other wood-pulp intermediaries along the way. This is not, in short, your kindergartener’s papier-mâché.

The exhibit has not only three dimensions but three sites: the Round Barn, Kalkin House and the Lighthouse on the museum campus. As the largest space, the barn holds the most in its lower level — at least two works each by a dozen artists. The organically shaped lamps of molded, handmade paper by Vermont’s Studio-Glow (Riki Moss and Robert Ostermeyer) provide soft illumination around the barn’s inner silo. Nava Lubelski’s “1998 Tax File” turns shredded financial documents and glue into graceful, amoeba-like doilies. Nami Yamamoto’s “Radiant Flux,” sequestered by heavy curtains, features a large table display of paper botanicals — leaves, stems, flowers — eerily glowing under black light.

Most of the other artworks in the barn are masterpieces of cutting. Béatrice Coron enlists Tyvek to create “Chaos City,” black silhouettes of numerous peopled, window-like vignettes against a white background. With a similar technique and urban affinity, Lauren Clay opts for white-on-white cutouts of city block maps of Montréal and Toronto. Also all white, Bovey Lee’s “The Butterfly Gown V” is spectacular: a delicate chain-link pattern with its namesake caught within. There is humor here, in Jared Andrew Schorr’s cartoony characters, amusing titles and lacy cursive-script cutouts; and mysticism, in Hunter Stabler’s cryptic mandalas and head-scratcher titles — contemplate, for example, “Oracular Metatronic Heliospectrascopic Enneagram.”

Michael Velliquette also plays with the idea of iconography, albeit with a more tribal sensibility. His spare list of materials — paper, gator board, glue — contrasts with the visual explosion of his wild, brilliantly colored piece “Seeker.” Even his black-on-white cut-paper work “Skin and Bones” possesses a totemic power.

The more modest quarters of the Lighthouse feature seven artists who subvert books into … something else. Robert Thé has meticulously altered hardbound volumes into a gun, a scorpion, a lobster and a broom — imagine sweeping up with a long-handled “Britannica, Vol. 12.” Jacqueline Rush Lee moistens books and turns their swollen pages into lovely floral sculptures; her ottoman-size “Slice” resembles a sushi roll.

Doug Beube’s wall-hung “Spanish Speakers” is a visual pun: A college Spanish dictionary is splayed with its spine toward the viewer, and into each side he has cut perfect oval craters, the text on the pages forming whorls. The book literally looks like a pair of speakers. “A Loose Leaf and Self Revising Reference Work” is the wordy name of Brian Dettmer’s visually loquacious assemblage of five volumes of a vintage encyclopedia, from which he has ingeniously cut and layered engraved illustrations, maps and phrases.

A popular, interactive portion of the Lighthouse exhibit is the small room filled with pop-up books. Visitors of all ages can sit and examine published ones, while several artists’ drawings and models on the walls and display case show how the books are made. Here are pages from Sam Ita’s Moby Dick, Frankenstein and 20,000 Leagues Under the Sea pop-ups. A coup for the museum was acquiring original artwork from Matthew Reinhart’s Encyclopedia Mythologica: Dragons and Monsters Pop-Up just in advance of its 2011 publication.

Last but certainly not least, the Kalkin House gives modern shelter to a couple of age-old paper crafts: origami and papier-mâché. Among examples of the former are Robert J. Lang’s freestanding, folded-paper creatures and the beautiful “Morpho Flight, opus 505,” with blue paper butterflies on white handmade paper. Chris Palmer’s contributions of tessellated silk — intricately folded designs from a single sheet — are geometric marvels.

Colorado artist Emma Hardy’s work may be the most amazing of all: She makes paper look like us. Though a separate installation presents a colorful menagerie of jungle animals, birds and insects, it is her uncannily realistic, almost-life-size human figures that give one pause. Never mind that they are uniformly the color of grocery bags; you half expect her people, like monotone-painted mimes, to look up suddenly and say hello. Instead, the motionless men, women and one child — oh, and a tree trunk — emanate a subtle, electronic lub-dub. To a remarkable exhibit of human handiwork, Hardy has given a heartbeat.

“Paperwork in 3D,” sculptural paper creations by 25 artists, in the Round Barn, Kalkin House and Lighthouse of the Shelburne Museum. Through October 30. shelburnemuseum.org