On the Obama Bus 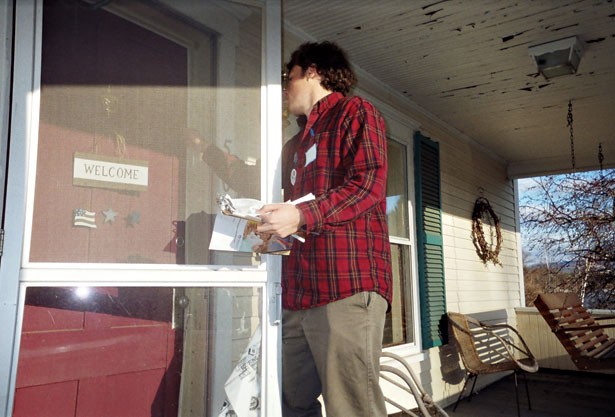 Last Saturday, about two dozen Vermonters ranging in age from 17 to 72 schlepped through the streets of Littleton, New Hampshire, on behalf of a presidential candidate they believe can transform American politics. Contrary to what some might suppose, Barack Obama's longstanding and well-advertised opposition to the war in Iraq wasn't the main motivation for these volunteers. Instead, most were inspired by what they see as the Illinois senator's shining example of honesty and inclusive leadership.

Not that all the Obama activists are wide-eyed idealists. Though a certain degree of altruism seems required for traveling two hours to knock on strangers' doors, many of the younger canvassers offered pragmatic perspectives that traditional Vermonters may readily relate to.

In fact, the vibe among the students on this yellow school bus bound for Littleton, just across the Connecticut River from St. Johnsbury, would probably have seemed way square to their "Clean for Gene‚" ancestors, who carpet-bagged to New Hampshire 40 years earlier. Back in 1967, helping Senator Eugene McCarthy attempt to unseat President Lyndon Johnson - and thereby end the war in Vietnam - was just one item on an agenda driven by dreams of revolution, personal as well as political.

The hippies who got haircuts probably didn't fool many of the New Hampshirites they'd come to convert. But they did help spark an antiwar rebellion that almost nobody knew was brewing in the then-solidly conservative Granite State.

New Hampshire has since grown more moderate. And today's political attitudes may prove surprisingly congruent with the mellower message delivered by Obama, who presents himself as a unifier.

Perhaps the voters in the nation's first presidential primary will be persuaded to think like Dana Jokela, a University of Vermont senior who has become politically active for the first time. He described Obama as "progressive, but having a realistic stance on most issues." The candidate's emphasis on looking past labels resonates with Jokela. He said Obama "treats everyone as a person, not as a Republican or Democrat."

Littleton is primed for a unity pitch like Obama's: The latest American war doesn't appear to be a divisive issue in this town of 4400 residents. "I thought the number one issue would be Iraq, but it's what affects people personally," said canvasser Bill Masterson, a retired Defense Department official who lives in Lincoln. He cited the example of a mother who wanted to discuss deficiencies in her child's special-education program.

Locals seem much more interested in Obama's positions now than they did a few months ago, added Tom Brown, a volunteer from Colchester who canvassed the same Littleton neighborhood in August. Brown also found that, while support for Democratic frontrunner Hillary Clinton may be broad, "it's about an inch deep."

A Boston Globe poll released on November 11 confirms Brown's impressions. The survey shows Clinton leading runner-up Obama in New Hampshire by a 35-21 percent margin - 9 points less than in September. And voters are being swayed by the same Honest Obama image that the Vermont volunteers find so appealing. Asked which candidate is "most trustworthy," 26 percent of those surveyed chose Obama, while 19 percent named Clinton.

"He's an honest guy," Will Robb of Burlington said, when asked to pinpoint his top reason for supporting Obama. "When he talks about a policy, it's not like he's moving pieces around on a chessboard."

It's hard to miss the reference to Clinton there. But, like most of the Vermonters traveling to Littleton, Robb was reluctant to criticize the New York senator directly. Perhaps it's because campaign organizers instruct canvassers to speak no ill of other candidates - or perhaps a genuinely positive outlook comes easily to Obama supporters.

"I feel hope for the first time in decades," said Gail Neale, a 72-year-old Burlingtonian. She rattled off the Obama attributes that hearten her: "honesty, integrity, guts, ability."

In keeping with their generally measured approach, some Obama backers expressed only mild excitement about the possibility of the United States' electing its first black president. "Being an African-American is an important factor," said Jokela, the UVM senior, "but it's not what's pushing me to support him." Jokela and his classmate Peter Merritt, both majoring in ecological agriculture, identified climate change as the issue that most concerns them.

Race does matter, Brown interjected. The retired air traffic controller suggested that Obama's racial heritage - he was born to a black father from Kenya and a white mother from Kansas - could help reduce hostility toward the United States in the developing world. "If you're a 14-year-old boy in Pakistan, the only American presidents you've seen are Bill Clinton and George W. Bush," Brown said. "Obama has the same skin color as you. His grandmother is living in a mud hut in Africa. And he's had absolutely nothing to do with the war in Iraq."

John Wong, a Chinese-American from Rochester, also highlighted Obama's African descent. "He represents a changing America, a new America," Wong said. "Most minorities growing up before World War II would say, 'I'm white' as a way of trying to get ahead. Now they can see it's possible for their children to grow up to be president."

What about gender politics? Just as they downplayed the salience of Obama's skin color, many of the women on the bus said a candidate's sex should not be a major consideration. "I'd say it's more important to have a black than a woman as president, if I were to think that way," Neale commented. "But it makes about as much sense to support someone because they're red-headed."

"Having a woman elected would be positive, but to vote for her just because she's a woman would be counterproductive," added Zina Ward, a senior at Essex High School. "That would implicitly be saying gender should be a criterion."

Pressed to say what kept them off the Hillary bandwagon, Obama supporters en route to Littleton cited a variety of negatives. "She's carrying too much baggage," suggested Katie O'Neill, a first-year student at UVM. "What happened with her husband means she can't get broad support," O'Neill added, in reference to Bill Clinton's Oval Office sex scandal.

Ida Gatwood of Burlington said the former First Lady has diluted her political identity. "I liked her when she was in the White House, but I don't know who Hillary Clinton is anymore," Gatwood said. "She never gives clear answers."

Brown, the unofficial organizer of the Littleton trip, weighed in: "Nobody's more Washington establishment than Clinton. Electing her would be a continuation of the dynasty, of cronyism."

On arrival in Littleton, the Vermonters were ushered into a nondescript office building on Main Street, where a pair of peppy New Hampshire organizers explained canvassing procedures. The visiting volunteers were briefed on how to introduce themselves to locals and how to respond to a variety of comments about Obama and other candidates. They received instructions for filling out an evaluation form for each household: Circling "1" signifies that a voter is willing to sign a pledge card for Obama; "2" means the person at the door favors Obama but isn't fully committed; "3" is for the undecided, accompanied by an "L" in cases where the voter appears to be leaning toward Obama; "4" indicates support for another candidate.

Will Robb and Peter Merritt moved hesitantly as they embarked on their separate rounds in a working-class neighborhood with a view of snow-capped Mount Washington. "I always get a little nervous before I start doing this," said Robb, who occasionally canvasses on behalf of Progressive candidates in Burlington.

Many knocks went unanswered, and the volunteers stuffed Obama-for- President literature under door handles at those houses. A couple of residents were downright rude in telling the canvassers they were not interested in Obama. After three hours on Littleton's wind swept streets, neither Robb nor Merritt had checked a single "1" or "2" on his sheet.

Other volunteers reported similar experiences when the Vermont crew regrouped for pizza at the Main Street headquarters, prior to bussing back to Burlington. Neale, however, said she'd found "wild enthusiasm" for Obama at a senior housing project in the nearby town of Whitefield. "They were just nuts for Barack," she added.

Despite the generally tepid results of the Vermonters' efforts, the New Hampshire organizers whooped up the day's significance. Tallies showed the volunteers had knocked on 272 doors in Littleton - a town with 699 registered Democrats.

Zina Ward and another Essex High School senior both left the numbers "1" and "2" unchecked on their sheets. But Ward wasn't discouraged in the least, saying she will "definitely" canvass for Obama again. Even Clinton supporters would have to regard the 17-year-old's enthusiasm for grassroots politics as a beautiful thing.