On the Fly: Adventures in Homeschooling Around the World | Kids VT | Seven Days | Vermont's Independent Voice

On the Fly: Adventures in Homeschooling Around the World 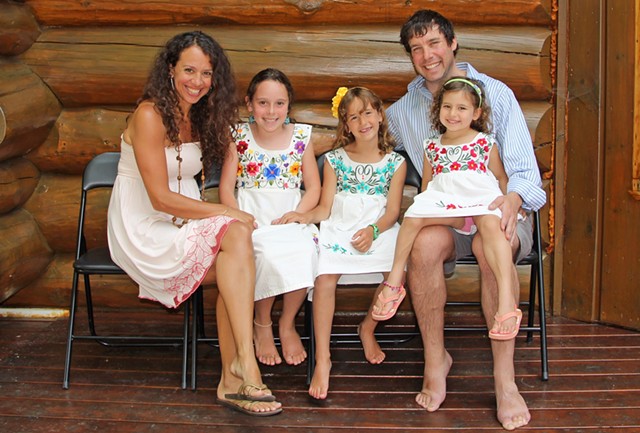 Kids VT contributor Jessica Lara Ticktin was finalizing plans to travel the world with her family — and to homeschool three daughters along the way — when she found out she was pregnant. The trip is still a go. She’ll document her family’s adventures on this blog until they return to Vermont in December.

In early September two years ago, my husband, Adam, and our three daughters, Dahlia, Lola and Kaya — then 8, 6 and 3 years old, respectively — went hiking in the Northeast Kingdom. It still felt like summer, and the leaves had yet to turn, creating a brilliant canopy of green above us.

We let out a collective gasp when we reached the top of Mount Pisgah. Sheer cliffs dropped hundreds of feet directly into Lake Willoughby. The view was breathtaking. But with no guardrails or fences up there, it was also scary.

Adam and I have always sought out that perfect combination of beauty and risk — in work, travel and love. Now, we were ready to take a leap of faith as a family.

On our descent that afternoon, we hatched a crazy idea: In two years, we’d relocate with our kids to another country — simply for the sake of living abroad.

Adam and I have always had wanderlust; we met while traveling in South Africa 16 years ago. When our first daughter was born in 2004, friends told us that would be the end of our traveling days. “You can’t go traipsing around the world with an infant or toddler,” they told us.

[jump] Adam was determined to prove them wrong. When Dahlia was 8 months old, we planned an ambitious, 17-day-trip to Patagonia. Sure, it was different from traveling as a twosome: The plane rides were not fun, and we were exhausted. But I got to hike with Dahlia on my back (and stop to nurse her on the trail while astonished hikers did a double take) through the remote and majestic national parks of Chile and Argentina.

Then Lola was born, and a few years later, Kaya. Life got busier and it became harder to imagine traveling the way we used to.

Fast forward to 2012. As we made our way down the Mount Pisgah trail, we talked as a family about where we might want to live. The girls were eager to entertain the idea even if they weren’t familiar with the countries Adam and I suggested.

One of our initial goals was to expose our children to another language. I grew up in Montréal and spoke French at school from fourth grade until I graduated from high school. I’d like our children to experience something similar. (The older two attend Edmunds Elementary School in Burlington; the youngest is in preschool.)

Before we picked a destination, we set a date: Fall 2014. We’d have to rent out our house and find someone to look after our dog, and Adam would have to take a leave of absence from 2Revolutions, the "education design lab" he co-owns. As a part-time freelance writer and independent radio producer, I have flexibility in my work.

Our plan morphed over time — from a year in Peru, to six months in France and French-speaking Africa, to time in East Africa. And then the plan morphed even more: I found out I was pregnant.

We decided to go ahead with the trip (what can I say? We love a good challenge.) with a few changes to accommodate my pregnancy. It wasn't safe for me to get the yellow fever vaccine or anti-malaria medication necessary to enter Rwanda or Tanzania. So we rerouted to South Africa instead. And now, given the outbreak of ebola in West Africa, I'm extra thankful we made the switch.

We left home last Thursday with the following itinerary: six weeks in Asia (Japan and China), four weeks in Africa (South Africa and Namibia), five weeks in the Middle East (Turkey and Israel) and a few final days in Greece and the UK.

So, why are we doing this?

For one, we want to shake things up. I believe real growth happens when we are pushed out of our comfort zones and challenged.

Second, we want our children to know how other children live in different parts of the world, to gain a new perspective on their own country and culture. Also, traveling requires a certain kind creative thinking; you become more flexible and adept at problem solving. These skills will be valuable throughout their lives.

Third, it's a chance to freeze time. We want to spend four months together before our children stop wanting to be with us all the time, before they grow up.

Over the past two years, our girls have grown bigger and smarter and more resourceful. They are capable of being patient. But it took some convincing to get them all on board with the world-travel plan.

At first, Dahlia didn't want to miss part of her fifth-grade year, and she was dubious about her father's and my homeschooling credentials. (For the record, we both have graduate degrees — mine in cultural history and education and Adam’s in public policy. Plus, Adam's company is leading education-innovation efforts in 20 states.)  Dahlia came around. But she had a point: We have never homeschooled kids. This will be a learning experience for all of us.

Over the last few weeks, as we geared up for our adventure, making lists, getting vaccinations and visas, booking rental apartments and reading up on our destinations, we realized there was one more thing we had to before we left.

Last weekend, we circled back to Mount Pisgah, where we had set our travel plans in motion. We were serious, almost solemn, as we hiked.

Dahlia, now 10, reflected on how ready she now feels for this trip. Lola, 8, talked about the project she's planned, comparing buildings around the world. Kaya, who will turn 5 in Japan, is excited, she said, for an opportunity to pick up a few phrases in Japanese and Hebrew.

As for the little one growing in my belly, it’s safe to say this baby will one day feel at home in the world.