On the Brink: Burlington Development Pushes Boundaries on Lakeview Terrace 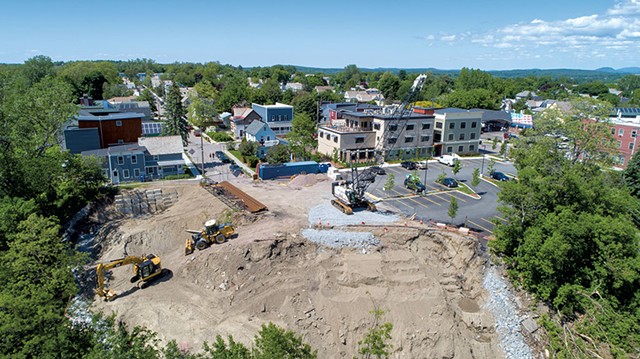 Dennis Breitigan studied a thin fracture in the parking lot pavement at the top of Depot Street in Burlington.

The Naylor & Breen Builders superintendent paused to think, then shouted directions at Josh Masterson, who maneuvered the claw of an excavator to shore up a wall of dirt with a large concrete block. Gazing down a 40-foot drop to the city's waterfront below, Breitigan explained that a part of the hillside was caving in.

That's one of the perils of building a four-story, 43-unit apartment complex on one of the Old North End's steepest cliffs.

"It's a big one," Breitigan said matter-of-factly last week of the construction project at 85 North Avenue.

It's also the most challenging and riskiest to date for Erik Hoekstra, managing partner of real estate company Redstone. The complex will stand on 50-foot galvanized steel columns anchored by piles sunk deep into the ground. A 32-car parking garage occupies the entire first floor.

Hoekstra said he saw the parcel as an "opportunity to build something unique and interesting."

He wasn't the first Burlington developer with plans for the plot. Eric Farrell, owner of Farrell Properties, bought the property from Burlington College in February 2015, when the failing college was off-loading assets in an attempt to stay solvent.

Farrell paid $150,000 for the oddly shaped parcel in one of a series of purchases that included the acreage down the street at 375 North Avenue, on which he's currently constructing the 739-unit Cambrian Rise development.

Farrell said he had too much on his plate at the time to take on another residential project. So, two months later, he sold the land for $155,000 to "the boys at Redstone."

The land was cheap by Burlington standards, Hoekstra said, in part because of the complexity of the terrain — and because the Committee on Temporary Shelter next door has a long-term easement on a portion of the parking lot, further limiting the buildable space.

He downsized the project to address the construction challenges; originally, Redstone had planned a 65-unit complex. "We have to deal with cantilevering a building 40 feet in the air," Hoekstra explained.

Engineering studies showed that the building's foundation would be stable on a layer of marine sand deposited millions of years ago when the Champlain Sea covered the region. According to Hoekstra, that's better to build on than the loamy soil that covers much of the rest of the city of Burlington.

Just to be sure, a vibratory hammer plunged construction piles — which will hold up the steel columns — into the ground last week, Breitigan said. 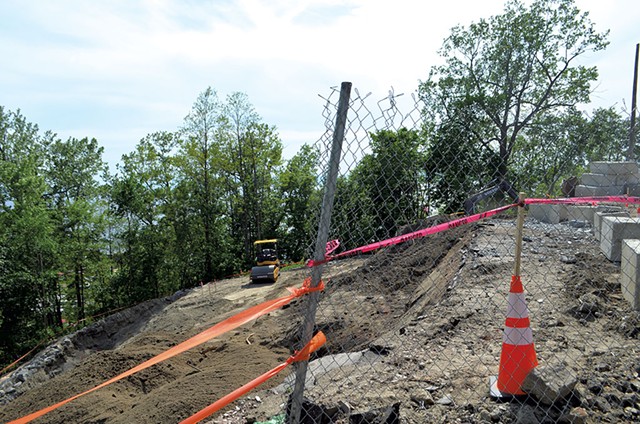 Predictably, nearby neighbors on Lakeview Terrace heard the rumble of equipment — and not for the first time. In 2012, the Hartland Group, a development company cofounded by Mayor Miro Weinberger, broke ground on a 25-unit apartment building at the north end of the street.

Residents pushed back at the time against the size of the Packard Lofts development and the associated parking issues. A couple of years later, they also expressed concerns about the expansion of homeless advocacy nonprofit COTS, which opened a new facility at the southern end of the street in 2017.

Hoekstra heard similar complaints about 85 North Avenue. At a Development Review Board meeting last year, Lakeview residents objected to everything from the parking plan and street traffic to the size of the building and where resident pooches would pee.

"Don't you think you could provide a dog area? Guess who's got the closest grass?" Julie Perlmutter objected in an interview with Seven Days last week.

Hoekstra said he would not oppose the latest local grievance, which concerns the likely increase in traffic from the complex. A group has circulated a petition to close off Lakeview Terrace at its southern end, gathering more than 100 signatures, Perlmutter said. The effort aims to persuade the city's Public Works Commission to take up the issue.

Hoekstra said he learned his lesson from the Packard Lofts project and preemptively visited neighbors to show them the plans in 2015. After getting their feedback, he changed the façade of the building and plans for parking and walkways — and then had another round of conversations to show how he had incorporated the suggestions.

Redstone received its final city permits in June 2017 and expects to complete the project by next spring.

"Erik accommodated a lot of things that residents brought up," said Alan Bjerke, a Lakeview resident who led a legal challenge against Packard Lofts. "I think he did it right."

Hoekstra is not the only one in the area who sees value in the lake views. Across Depot Street, Cynthia Smith is selling a similarly steep 0.1-acre lot for $129,000.

With a retaining wall foundation, she said, construction is possible. The land has been in her family for 180 years, but Smith, who lives in Massachusetts, is ready to give it up.

Employees at the city's planning and zoning office said they've been getting calls asking for more details about the plot since it went on the market a month ago.

"It going to take a special buyer who wants to be in town and take on a challenging project," Smith said. "There are very few spaces around like that one."

As Seven Days reported in 2016, precipitous terrain in the Queen City has posed problems for developers and residents alike. In 2013, a condo association along Manhattan Drive sued its builder, Dennis Rouille, and his subcontractors because a retaining wall had slipped down a steep slope over Burlington's Intervale.

The building had moved more than three inches in some places, said David Goode, president of the 15-member condo association, and would require costly repairs. The still-pending suit requests that the builders repair the parking lot and retaining wall to stabilize the condos.

It should have been a "very standard construction project," Goode said. "They just blew it. All we want is for it to be fixed."

The city relies on the expertise of the project's technical engineer in such cases, said assistant director of the Department of Public Works Norm Baldwin, who's an engineer himself. It's also in the interest of the developer to make sure they get it right. Developers "don't want to put [up] a building that's not going to be there in short order," he said.

Hoekstra seems well aware of the risks. "If something goes south," he said, "it's our butts on the lines."