On Tap: A Conversation With Lost Nation Brewing 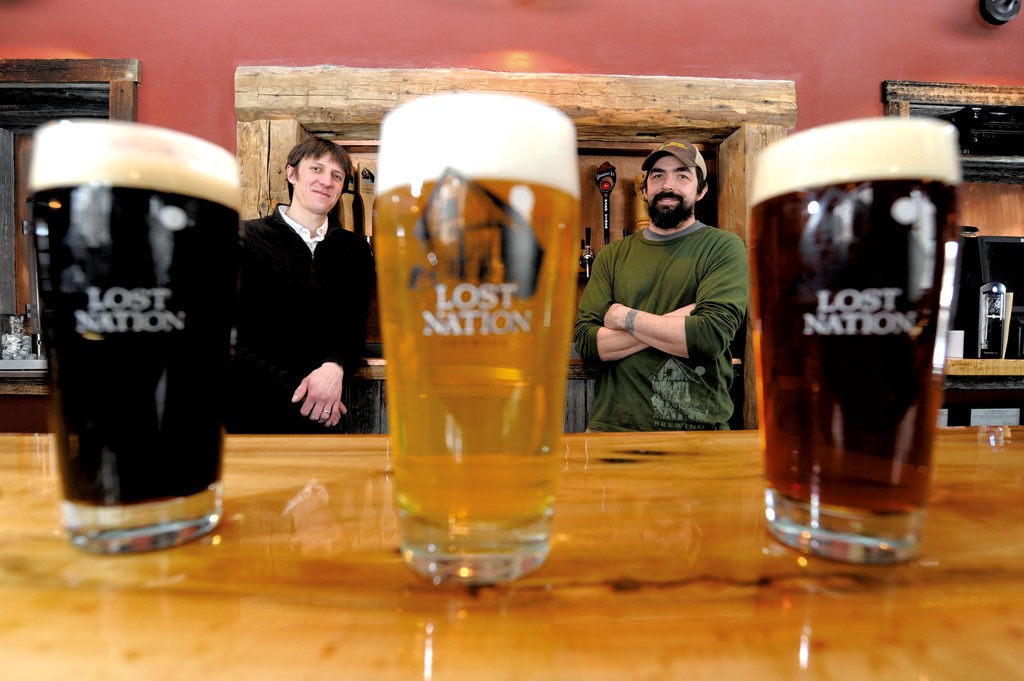 It's been a little more than a year since Allen Van Anda and Jamie Griffith opened Lost Nation Brewing in an industrial corner of Morrisville. They were on a mission to create sessionable (read: low alcohol), Old World-style brews grounded in and inspired by Vermont's landscape and culture.

From the outset, locals knew to expect great beer — Van Anda, 36, was a founding brewer at Trapp Lager Brewery in Stowe, where Griffith, 42, joined him a year later. Before long, the two were dreaming up their own project, and soon opened Lost Nation in earnest in the former Rock Art Brewery space. When Lost Nation sent out its first wholesale shipment on May 8, 2013, it went to a handful of accounts — Burlington's the Farmhouse Tap & Grill, Montpelier's Three Penny Taproom and Waitsfield's the Mad Taco among them — known for their sprawling, sometimes esoteric draught lists.

The brewery's reach quickly grew: Now, a year later, Lost Nation's accounts number about 250. Van Anda says the brewery has increased its production every month since it opened. This Friday, September 12, the company will release 600 bottles of Lamoille Bretta — a classic saison, refermented with Brettanomyces Belgian yeast.

For the inaugural run of a new series that will tap the minds of Vermont's best and brightest brewers, Seven Days chats with Van Anda and Griffith about their favorite ferments, feeding beer to cows and what hard work tastes like.

SD: What did you drink growing up?

AVA: We rotate through our core six beers pretty frequently. The seventh beer right now is our Lost Galaxy, which is a wheat IPA. We just packaged Oktoberfest as well.

SD: Before you got into brewing, where did you work?

AVA: Before I [started brewing], I had, like, high-school-kid jobs. One of the jobs that I got, which I never wanted to leave, was at a brewery. I started cleaning floors and all that, then got into working on the bottle line, cleaning out the tanks, and went from there. Even when I moved up here in 1997 from New Jersey, I worked in breweries in Vermont. I worked at Kross [Brewing Company] in Morrisville, which is now closed, and then I was at Rock Art for a long time.

JG: When I first moved to Vermont from Virginia in 1995, I started working on small family farms. From that — farmers markets, things like that — I started finding people that were producing things with what they were growing. My good friend Matt Koch started Road's End Organics, and I worked with him for about 10 years. [When] he sold the company, I went over to Vermont Soy and started formulating soy milk and making tofu.

SD: What's tough about making beer for a living?

JG: It never leaves you. I'm always thinking about it. That is a hard thing, but I don't dislike that.

AVA: You're working with yeast, which is a living organism. Yeast doesn't take breaks on a holiday or evening. And you're working with machines; there are so many things that can pop up that might not be on your schedule, so your mind is constantly on.

SD: Anything you wish you knew when you started that you know now?

JG: It doesn't get any easier.

AVA: Jamie's said this a million times: You've got to write a business plan. Running a brewery and brewing beer is not just about quitting your day job and going into business. It's so much more involved than that.

JG: When we were at Trapp, we did this barrel-aged bock, and it did not translate.

AVA: When you're working with barrels, it adds this whole other variable. We ran this beer into whiskey barrels — they were actually Sam Adams barrels that had been used a few times before — and the beer just went the opposite direction. It thinned out; it was gross.

JG: It oxidized. It was not sellable, so we dumped it.

AVA: We fed it to the cows.

SD: If you had total creative license, endless funding and all the time in the world, what would you brew?

JG: We have a business plan; we have a five-year and 10-year plan, so we've thought out what we're doing and how big we want to be. So endless amounts of money aren't really going to help with that plan. We see where we want to be, and we brew what we want to brew.

SD: What ingredients do you like to experiment with?

AVA: That's tough. We certainly try to make beers that are balanced and with flavors that meld and work together.

JG: Using fruit kind of excites me. I'm interested in what it does.

SD: Name one brew you're really into right now.

JG: The Allagash Coolship series. Anything that Allagash does in a coolship, with the wild fermentation, I'm really excited about.

AVA: There's a [German] style of beer called rauchbier — "rauch" means "smoke." They're just a really nice base lager beer, but they have these smoky notes to them. Just beautiful.

JG: They're awesome this time of year, going into September. Like drinking a campfire.

AVA: There are so many different combinations that you can come up with ... It depends on the day and the time — the weather? I'm too wishy-washy. I can't pick a favorite. Pairing beer and food is one of my favorite things.

SD: What excites you about the Vermont beer scene?

AVA: The energy of it. We all get along really well, and we're having a lot of fun, and the rest of the country and world are interested in the products [Vermonters] are making. Not only in beer but in everything else. It's great to be a part of that.

JG: I would second that. The momentum we have right now as an industry, and especially as a community of beer makers here in Vermont, is awesome. You can call anyone that brews beer in Vermont and get something you need. Grains, hops — everybody's really helpful. And there's a lot of experience in brewing in the state, a lot of knowledge to pull from.

JG: As long as the quality stays high, there's plenty of room in the market.

AVA: If we have another five giant breweries open up, can the whole supply chain handle that? I don't know. So I think it depends on the business plan.

SD: Do you see Vermont developing its own distinctive brewing style?

AVA: Everyone's doing something different. But what excites me is the ingenuity happening here. We have great water, and we're all making beers that work for each one of us. It goes to show how diverse the beer world is today.

The original print version of this article was headlined "On Tap: Lost Nation Brewing"