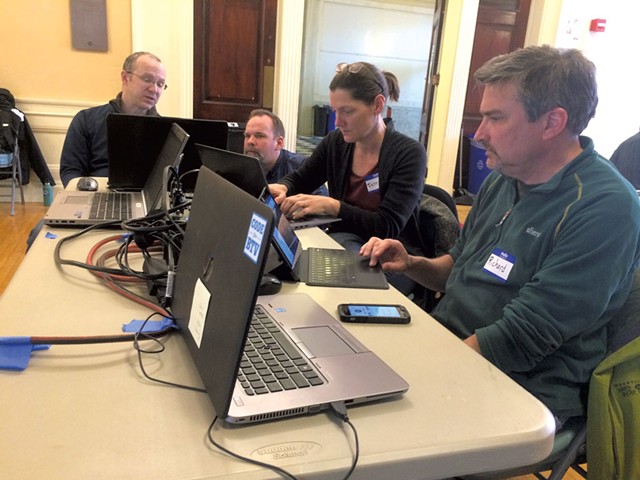 No offense to the late Stan Lee, but saving the world isn't just for superheroes anymore. In fact, some of today's most prolific do-gooders could be couch potatoes.

Roughly 19 globally minded citizens proved that point at Open Data Day on Saturday in Burlington City Hall Auditorium. The event was cohosted by the University of Vermont's Humanitarian Mapping Club and Code for BTV — the local "brigade" of Code for America, a network of technologists and community organizers undertaking projects for the public good.

Outfitted with laptops, an internet connection and enough snacks to sustain a dorm-lounge video-game jam, participants spent part of the afternoon mapping buildings on a satellite image of remote Tanzania. The squad ranged in age from teens to seniors and divided fairly equally along gender lines. In the mix were professional technologists, high school students, educators, Code for BTV members and total noobs (e.g., a certain Seven Days writer).

Regardless of our level of technical expertise, we would each input details about the number and location of buildings in the designated area. It's information that could be useful to other do-gooders in their on-the-ground fight against female genital mutilation: Knowing the buildings' location could help outreach workers from the Tanzania Development Trust shelter girls in crisis.

"An easy video game" is how Noah Ahles, geospatial specialist with UVM's Spatial Analysis Lab, described the process of adding such data to a crowdsourced map of the world called OpenStreetMap. It's "the Wikipedia of maps," he suggested.

After a brief PowerPoint-style tutorial from Code for BTV's self-described "mapping nerd" Kendall Fortney, we were soon moving our cursors over hazy images of buildings on our assigned sections of the satellite image, outlining the buildings with mouse clicks and then saving the information. Saving the world, basically.

Eventually, specially trained external volunteer validators somewhere in the world would review our work and commit it, or not, to the updated map.

Our mission, which focused on buildings in rural Africa, came at the request of an NGO. Other missions might involve mapping all manner of geographical features — roads, rivers, even footpaths — and take place outside group "hacks" like Open Data Day. One could even contribute to OSM from, say, the comfort of one's couch.

Fortney is an insights analyst at Burlington-based Social Sentinel and the first Data Innovation Fellow at the Vermont Center for Geographic Information, but it doesn't take his skill level to participate. His tutorial introduced us to both OSM and the Humanitarian OpenStreetMap Team (HOT) Tasking Manager, a platform that breaks down a region into separate "tasks" to distribute and focus the labor.

Anyone with an OSM account (free) can make map changes. Ahles' Wikipedia comparison is apt: OSM's crowdsourced dimension makes it a foundational source of geospatial data and a starting point for deeper discovery. Its remarkably low barrier to entry owes much to a global effort to use technology to create and share knowledge openly.

For HOT, an international organization incorporated in the U.S. in 2010, open mapping is a boon to crisis management and sustainable development in parts of the world where, for myriad reasons, no good maps exist. As Fortney noted, what appears or doesn't appear on a map can reflect biases in mapmaking. He referenced a CityLab article by Sarah Holder that describes the Tanzania region we mapped as a "Google Maps dead zone." Volunteers like us were there to "fill in the blanks."

Holder also reports that OSM tagging is still a male-dominated activity; women's participation in humanitarian crisis mapping is less than half that of men, but it's growing stronger.

Sometimes an initiative to make better maps emerges spontaneously. Fortney's co-organizer and Code for BTV "captain of code," Nick Floersch, is a senior web/GIS applications specialist at Montpelier-based Stone Environmental. On Saturday, he observed that natural-disaster relief workers need up-to-date maps, particularly when the landscape has been altered, as during the recent hurricanes and flooding in the U.S. and Caribbean. Maps of the affected regions can be updated using OSM and accessed by responders either during the current crisis or the next one.

"What we're about is using digital methodologies to increase the efficiencies in working together and sharing the tool," Floersch said.

Fortney and Ahles both have experience in initiating OSM crisis-mapping projects. When the Kilauea volcano erupted in Hawaii in 2018, Fortney knew existing maps wouldn't show a complete and accurate view of the damage — or the escape routes. He submitted a request to HOT and then organized a crisis-mapping event at Burlington's Generator maker space.

When Ahles was visiting Ghana in 2014, Ebola broke out in nearby Guinea, Liberia and Sierra Leone. Prior to that trip, he had attended a local crisis-mapping event in response to 2013's Typhoon Haiyan in the Philippines, so he knew how to aid relief efforts when he returned to Vermont.

At city hall last week, we tagged more than 1,000 buildings. On my own laptop screen, the visual results appeared modest. Knowing that my contributions were real, however — and that they were potentially helpful to an important effort — unburdened me from the common lament that an ordinary person can't make a difference. I did. Multiply that by the number of people in the room, and one can imagine a real impact.

As Ahles sees it, that realization is a big part of crisis mapping's appeal. "You can give a helping hand a world away without being really rich and having to send a lot of money over," he said. He added that the low technical barrier for entry makes for a more inclusive mapping community.

Event participant Lea Ann Smith, a math teacher and leader of the STEM Academy at Essex High School, thinks her students' sense of self and others could make crisis mapping a good fit for how they learn. "They see the world as connected," she said. "They see their whole life as connected."

Smith said she could imagine her students, who already spend a lot of time in front of screens, keeping a tab open to OSM and contributing "in a big, helpful way."

While Smith learned to map so she could run a similar event with her students, event co-organizer Floersch stood in front of city hall, handing out flyers and trying to recruit world savers. The most persistent challenge to that cause? In Fortney's view, the hurdle is "convincing people that it's really easy."

The original print version of this article was headlined "On the Grid: Humanitarian Mapping With Code for BTV"