On Huntington's SHO Farm, Nearly Everything Is Edible 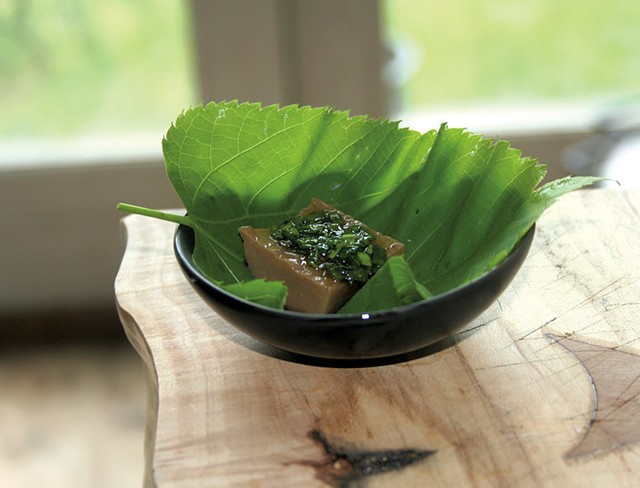 It's spring, and the fragrance of lilacs fills the air. Their flowers offer a rare and delicious scent, but are they good enough to eat?

Chances are, consuming the tender blossoms has never crossed your mind — unless you're Melissa Hoffman of SHO Farm. On a recent day in the "permaculture food lab" on her 1,296-acre property in Huntington, lilac blossoms spilled from a dish onto a table, ready to be processed into an infusion that would be blended with apple cider. Beside the lilacs was a mold-covered wheel of cheese made from Hoffman's own pine-nut milk.

Those are just two of the surprisingly appealing concoctions she has made from plants. In Hoffman's lab, which evokes a wholesome version of Willy Wonka's chocolate factory, she spends her days turning the plethora of wild and cultivated edibles that grow on the property — from pine nuts to chaga mushrooms to goldenrod — into sustenance, with as little waste as possible.

"This food is free, for a lot of us," Hoffman said. "But [using] it takes time and knowledge."

That knowledge is Hoffman's stock in trade. She doesn't sell the results of her experiments at the local farmers market — or anywhere. But this June, she'll open her lab to an inaugural small group of students seeking to produce their own creations.

Born in Michigan, Hoffman, 54, has a background in journalism and filmmaking. She is executive director of the Foundation for a Sustainable Future, which purchased the former Teal Farm in 2003. The property was originally designed to support sustainable crops and edible landscaping — cornerstones of the permaculture movement — with the assistance of Moretown's Whole Systems Design.

SHO Farm has leased that land from the foundation since 2003, and Hoffman's wife, Shawn Smith, joined her in running the farm in 2010. Smith and Hoffman also run Earth Asset Partnership, a consulting business that focuses on "investing in no-kill permaculture systems and land-based businesses," according to its website.

The entrance to SHO Farm is a long sweep of wooded driveway shaded by a canopy of tree boughs. Past the point where one might expect to have made a wrong turn into endless forest, the trees open into a lush, sloping field.

There stands a trio of meticulously maintained buildings made of weathered wood. One of them — a barn trimmed in white and red and topped with a weathervane — is Hoffman's lab.

Plenty of people play around with food, but few do it to the extent that Hoffman does. Her lab is a wild collection of old and new, with a classic woodstove standing beside a gas stove, and a collection of stainless-steel racks and tables evoking a commercial restaurant kitchen. Surfaces are lined with glass jars displaying raw materials — 20 different types of dried mushrooms, for instance — and the products she's created from them. A fridge and freezer are stuffed with her handiwork — chive-bud capers, lacto-fermented gooseberries, richly flavored shiitake mushroom stock.

A dedicated vegetarian who is nearly vegan, Hoffman derives most of her nutrition from plant products, with the exception of a little honey and duck eggs from birds Smith raises on the property. By experimenting, she said, she has vastly expanded her diet. As she put it, her work is "about transforming plants. There's such a spectrum of flavor out there that we don't even know about, in our woods, on our field edges."

She also aims to fuse food and medicine, "making what's used medicinally into the food itself, so the food becomes the medicine, and there's no separation between the two," she said.

To spread her findings, Hoffman is writing a book. And, starting on June 24, she'll be bringing a small group to the food lab for a class called the Food Experience at SHO, which is "about bringing global possibilities to perennial and ethical food systems," she said. She and her students will explore "what's possible for a regional cuisine that is mentored by our global history."

A philosophy major in college who once lived in a Buddhist monastery in Korea, Hoffman describes herself as one who is dedicated to a form of consumption that regenerates the landscape. By deriving food from the forest that dominates the property, she pointed out, rather than cutting it down for cultivation, she and Smith can protect animal habitat and avoid soil erosion. 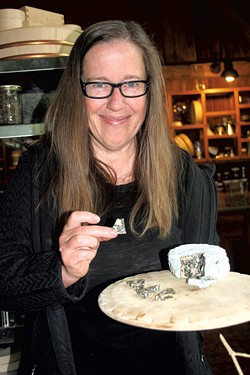 Another of her credos is using nearly every part of each plant — "stacking functions," as Hoffman puts it — to maximize the benefits of both cultivated and wild flora. From mushroom pulp, for example, she makes tan-colored paper. Pine trees provide numerous edibles: She uses immature cones to make syrup, collects the pollen and boils the needles to make tea. She turns pieces of the pine fatwood into charcoal, then into the soap that sits in slices on a dish by the sink. Pleasant-smelling, it lathers into rich bubbles in warm water.

One of Hoffman's most exciting experiments — inspired by others' recipes, she said — is creating wheels of "blue cheese" from nut milks. So far, she has crafted rounds made from cashew milk, pine, and a mixture of pine and hazelnut. Inoculated with Penicillium roqueforti, just like Stilton and Gorgonzola, the wheels develop moldy blooms on the outside and blue veins in the interior. One was blanketed in green and blue mold, while another had turned pure black.

Depending on the wheel's age and the nut that was used to make the milk, slices of the "cheese" might be creamy or crumbly. The ones with hazelnut caused a slight burn in the back of the throat, not unlike a peppery olive oil. Although one of the trio was over-aged — Hoffman is still seeking the sweet spot, she said — the other two would have been delectable spread on crackers or served with a selection of seasonal fruits.

Proof of Hoffman's skill is all over the lab. A bit of acorn jelly drizzled with soy sauce and chives and wrapped in a basswood leaf wouldn't have been out of place in a fancy Japanese restaurant.

Plenty of people make homebrewed cider, and much of it is, to be kind, a little funky. Hoffman's brew had plenty of yeasty notes but was pleasant and well-rounded.

She had turned black locust, a plant that bears incredibly fragrant flowers, into a jar of syrup. Sweet but not cloying, it captured the flowers' perfume.

A cup of bright-orange seaberry juice was lightly sweetened with just enough maple syrup to take the edge off the tart juice. It was like a richer, more viscous version of lemonade. A spoonful of savory seaberry sauce infused with garlic and thyme was markedly different and equally wonderful. Also called sea buckthorn, seaberry is considered a "superfruit," is well suited to Vermont's climate, and has medicinal properties as well as culinary value.

"It's an exciting thing to imagine these amazing, productive and hearty plants growing here, and [to be] able to do all of these different things with them that we love, that our palates love," Hoffman said.

While Smith and Hoffman promote permaculture ideals, they don't aim for complete self-sufficiency at SHO Farm. "We want to circulate our money with our neighbors who are growing really high-quality food ... [to support] the network of regional growers," said Hoffman. So they buy from other Huntington producers, such as nearby vegetable farmers and Running Stone Bread — and sometimes from farther afield, as long as the farmers are "doing restorative work," she said.

Ironically, modern technology — especially the recipes and research she finds on the internet and the connections it allows her to forge with food producers all over the world — makes it possible for Hoffman to explore ancient food-processing methods, such as making wild-fermented miso in the Korean tradition.

A hanging basket near the door holds bricks of dried, fermented Siberian pea shrub fruits. Soon she'll place the bricks in a brine with charcoal and chiles to continue fermenting. The bricks will become a paste that can be stirred into soups and salad dressings, and the liquid by-product will be a thick, salty concoction approximating soy sauce.

Like visitors to Willy Wonka's famous domain, guests at SHO Farm are likely to leave with a whole new attitude. Trees and plants that had seemed merely scenic now read as food sources. The blossoms on those shrubs would make a fantastic nectar to drink. That tree bears nuts that could be roasted and eaten. The edible mushrooms on a fallen branch don't go unnoticed.

And those lilacs in a vase on your dining room table? Maybe you can blend some of them into apple cider and enjoy their perfume all year round.

Details about Hoffman's upcoming class will be posted at facebook.com/tealfarm.vermont.