On Holiday Shows, Rap Battles and a Moment of Zen 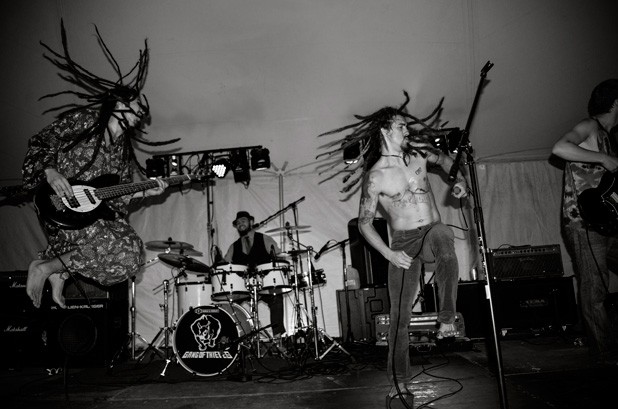 With only seven shopping days left until we celebrate the birth of Santa, the slate of holiday-themed rock shows is really ramping up. To wit…

This Thursday, December 19, a trio of local bands will hold court at the Higher Ground Showcase Lounge for a benefit show dubbed Rock the Holidaze. The beneficiary is a group called Never Give Up Ever, a local nonprofit organization whose mission is to financially assist families with children who are long-term patients at Fletcher Allen because of terminal or chronic diseases. NGUE helps those families defray the monumental costs of, and associated with, long-term care. That obviously includes hefty hospital bills. But they also help out in subtler ways, such as providing gas cards or lodging money for folks who need to travel to the hospital regularly. Or even just money to help offset the loss of wages for parents who can’t work while caring for their children.

As for the rockin’, two of the bands on the bill are likely familiar to local audiences. The first is Seamus the Great, a quintet composed of veteran rockers who have all been kicking around the scene for a while. The second, the Gang of Thieves, have been carving a niche for themselves in recent years with seriously energetic funk rock.

However, I’m not really supposed to tell you who the third band is. I can tell you that it’s being billed as the Robert Banks Trio. I can also tell you that’s an alias, a cover for a group that recently sold out the Higher Ground Ballroom and have started making quite a name for themselves on the national jam-band circuit. I can also tell you that all of the signage for the show basically tells anyone who can read who the band members are. Which leads me to wonder why we’re pretending this is a secret. But, hey, it’s the holidays, so I’ll play along. Yup, I’m just gonna sit here and … uh, twiddle mah thumbs. Ahem.

Moving on, nothing says Christmas like a chubby guy with a white beard, right? Right. So jam-inclined elves would do well to swing by Nectar’s this Thursday, December 19, for some seriously heady Yule jams at A Very Jerry Christmas with local Jerry Garcia Band tribute act, Cats Under the Stars.

By the way, Deadheads are about to have a really good run at Nectar’s and Club Metronome. Not that Vermonters ever really suffer a shortage on that particular score, of course. But check this out. The following night, Friday, December 20, long-running Dead tributeers Blues for Breakfast take the stage at Nectar’s. The following week, Cats Under the Stars rock a two-night stand for New Year’s Eve at Metronome. Then, in January, the weekly Tuesday “Dead Set” residency crew mines the jams from GD’s 1972 European tour. That, friends, is a shitload of Dead. So either Deadheads have been very, very nice this year or I’ve been very naughty.

Speaking of naughty, I’m delighted to report that the festive fellas from Metal Monday are once again throwing their epic holiday bash on Monday, December 23. If you recall from last year, the bash features a slew of local acts playing metal and punk versions of holiday favorites. It also features an upside-down Christmas tree suspended from the ceiling. Because, as we all know, Santa is an anagram of Satan.

Finally, regular readers know that it just isn’t Christmas for me, personally, until I’ve ventured out on Christmas night to catch my old pal and harmonica monster Greg Izor at the annual Blues Christmas show at Nectar’s. Full disclosure, Izor and I go way back and even played together a little bit in our college days. But since leaving Vermont, he’s become a certifiable beast on the blues harp and is doing quite well for himself in Austin, Texas.

In truth, I’ve missed the last couple of Blues Christmases for various reasons. But soaking in the last remains of Christmas cheer at Nectar’s is a tradition I expect to resume this year. It’s a great way to cap off the day. And a pretty good show, to boot.

In non-holiday news, congrats to local blues and soul man Dave Keller. Keller’s latest record, the excellent Soul Changes, was just nominated for Best Soul Blues Album of the Year by the Blues Music Awards. Keller writes that the BMAs are like the blues world’s equivalent of the Grammys, which is kind of a big deal. Keller has an extensive run of local shows coming up, culminating in a New Year’s Eve blowout at Montpelier’s City Hall Auditorium. There are actually too many Keller gigs to mention in this li’l column. So if you want to catch the man in person — and, trust me, you do — visit his website, davekeller.com for the complete schedule. Congrats, Dave.

If the BMAs are the blues world’s answer to the Grammy Awards, then would that make the King of Vermont Rap Battle the Vermont hip-hop answer to the Grammys? If not, it’s probably at least the local answer to the battle rap scenes in 8 Mile, right? Either way, the annual rap battle is slated for Club Metronome this Thursday, December 19. And I’m guessing it’s probably going to be a blast. Unfortunately, emails to the event’s organizer, S.I.N. Sizzle, have as of press time gone unreturned. So I’m not sure who is competing. Though I suspect the Aztext’s Learic might wanna show up to defend his crown from last year. And that alone is worth dropping by to see. For more info, just friggin’ show up.

Last but not least, as reported in this week’s food section, Burlington nightclub Lift is changing hands and will reopen as a new restaurant and music venue called Zen Lounge, perhaps as early as December 27. In other news, apparently Lift closed.

A call to owner Robert Rapatski confirms that the club will feature “a mix of live music and DJs.” Unfortunately, Rapatski was in the middle of a liquor inspection when we reached him and couldn’t elaborate further before our deadline. But as 7D food writer Alice Levitt reports, on weekends Rapatski plans to host local and regional bands in the evenings with dance music later at night, as well as DJs, salsa dancing and karaoke during the week. Stay tuned…

The Pogues, “Fairytale of New York”

The original print version of this article was headlined "Naughty? Nice!"