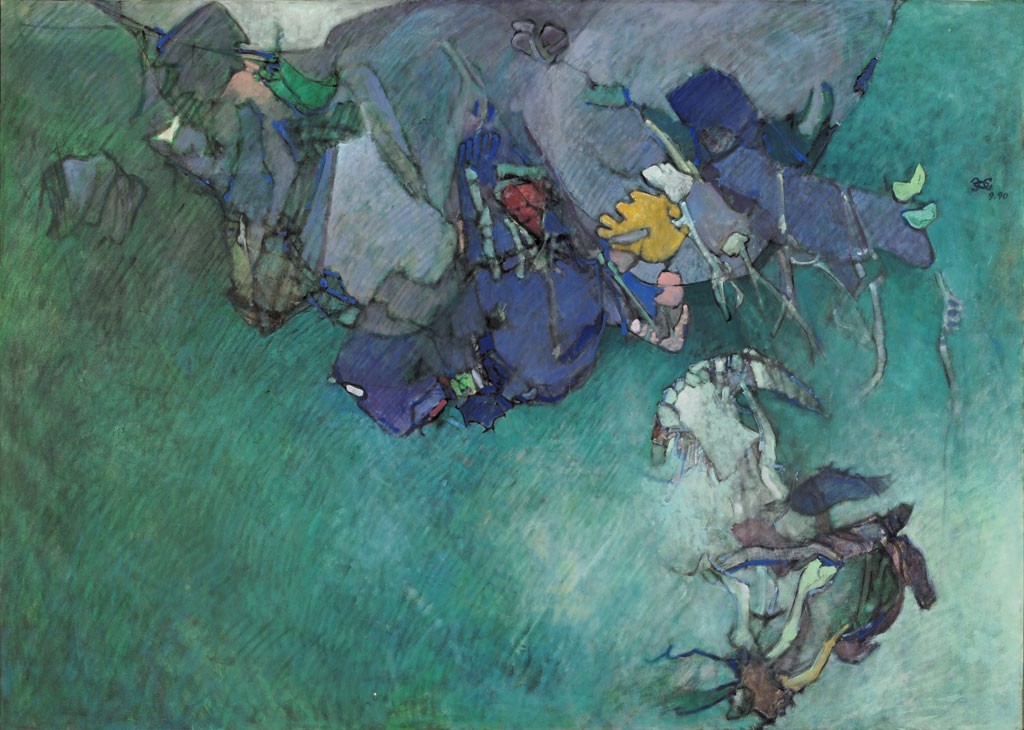 "Real art has the capacity to make us nervous," radical cultural critic Susan Sontag wrote in her influential 1966 essay "Against Interpretation." She went on: "By reducing the work of art to its content and then interpreting that, one tames the work of art. Interpretation makes art manageable, comformable" (sic).

Abstract painting, more than any other art form, is characterized by a "flight from interpretation," Sontag posited. "Since there is no content, there can be no interpretation."

Which is why so many abstract painters, Peter Heller among them, decline to say what their work "means." When Heller, who died in 2002, did discuss his art, he spoke about its form, not its content. And by leaving all his paintings untitled, he offered no cues or clues to his intentions in creating a body of work over 35 years in his northern Vermont studios.

If viewers resist reading meanings into the 20 pieces included in a Heller retrospective now at Burlington's BCA Center, they may be more apt to experience the nervousness that Sontag regards as a product of "real art." A little creepiness does permeate many of these pieces. They contain shapes suggestive of insects, possibly in fossilized form. There are wavy excrescences resembling the antennae or legs of crawling bugs, and whitened rods that might be bones. Crab claws and carapaces make appearances, too. Most of these pieces are composed in a subdued palette of browns and grays that imparts a melancholic mood.

With images lacking narrative and devoid of representation, it's impossible to avoid making, or at least seeking, associations with familiar objects. But, as Sontag would argue, that shouldn't lead to a search for messages in, or motives behind, abstract art.

A curator may, of course, choose to ignore Sontag's stricture against interpretation. A wall text introducing the BCA show asserts, for example, "Heller's abstract paintings reflect an inner quest to capture the essence and meaning of life." His work is also said to exude "a richness of internal feeling and observation."

Maybe so. Heller's biography does provide a basis for seeing his art as soulful and sorrowful.

He was born in Berlin in 1929 to Hans Heller, a Jewish composer and musician, and Ingrid Eichwede, a concert pianist. The couple fled to Paris with their 2-year-old son as Hitler was gaining strength. The family was again displaced a decade later, seeking refuge in the south of France when Paris fell to the Nazis. Hans Heller was sent to a French prison camp for foreigners, while Eichwede and her son hid in a goat hut until the war ended.

A relative invited the family to settle in New York, where Peter would receive a degree from Columbia University's School of Painting and Sculpture in 1956. He married Alexandra Noble, a fellow art student at Columbia, and took teaching jobs where he could find them, including at the University of Vermont in 1961 and later at Johnson State College. Heller taught art at Johnson for several years (the college hosted an exhibit of his paintings and Alexandra's sculptures earlier this year); he lived in Morrisville until his death.

Heller developed a distinctive style that hints at influences by artists such as Francis Bacon (1909-1992), a Brit noted for raw, abstracted images set in isolation against austere backdrops. Bacon's impact on Heller is most apparent in a large-scale triptych hanging in the rear of the BCA gallery that qualifies as the showstopper in this well-paced retrospective. It consists of jaggedly geometric shapes in mostly blues and grays, with an allusion to a crucifixion on the right-hand panel and an outburst of red, white and yellow in the center portion, which has been arranged to suggest the impaling of a downy-feathered bird.

Traces of the proto-surrealist Hieronymus Bosch (1450-1516) can be seen in Heller's eerily fantastical forms. There's also a suggestion of Georgia O'Keeffe (1887-1986) in the bony shards scattered on Heller's canvases. And the sun and moon shapes that appear in a number of his paintings could be seen as references to the discs that Wassily Kandinsky (1866-1944) included in artworks that ventured farther and farther from the realm of representation.

But Heller's work may best be described by indicating what it is not.

Although he studied painting in Manhattan while abstract expressionism was upending the Western art tradition, Heller can't be accurately associated with emancipators of the id such as Jackson Pollock and Willem de Kooning. Heller's markings are precise and his style of painting reveals little about his techniques. The abstract-expressionist style, by contrast, is wildly gestural and rife with evidence of how the paint was applied. Heller carefully outlines his sinewy shapes in black, intending them to be seen as separate from one another and from an often gently shaded background.

Heller also springs surprises. His pieces are varied in size and tone, with the mainly earthy colors seen on the gallery's Church Street side giving way to a few cool, aquatic compositions as the show moves to the City Hall Park side. The take-away impression is of a restless, questing artist who painted as he pleased, without regard for art-world fashions and determined to elude interpretation.