Miro Weinberger’s honeymoon as Burlington’s new mayor lasted all of about 30 minutes. An evening of ceremony, celebration and hope — including Weinberger’s expressed wish for “a new era of collaboration and cooperation between the council and the mayor’s office” — quickly gave way to a measure of contention.

Two city councilors ignored colleagues’ pleas for unanimity and voted to reject Weinberger’s nomination of Paul Sisson as the temporary second-in-command at city hall. Newly elected Progressive Max Tracy (Ward 2) joined four-term Ward 7 Republican Paul Decelles in opposition on the grounds that the council did not have sufficient time to review Sisson’s qualifications for the post of chief administrative officer.

Urging that action be deferred until the council’s April 16 meeting, Decelles argued that appointment of a top official on Organization Day, typically devoted to pomp and procedural matters, would be “a break from practice.” Weinberger responded that he wanted Sisson, a financial consultant, to be put in place immediately because “we have a short time to make important decisions about the budget.”

Sisson was subsequently approved on a 12-2 vote to serve as interim CAO until June 30. He said in an interview afterward that the “interim” designation represented “a compromise.” Weinberger had decided, Sisson revealed, that standard review procedures would have to be followed if the appointment were to be for a full tenure as CAO. Sisson, 56, added that he’s “considering” applying for the job on a permanent basis as Weinberger conducts a promised national search for an overseer of the city’s troubled finances.

The Decelles-Tracy team-up against Sisson’s nomination pointed to the possibility of a renewed Republican-Progressive alliance of convenience. Another hint of that happening: Decelles nominated independent councilor Sharon Bushor, who often votes with the Progs, for a seat on the city’s three-member Board of Finance. Bushor received unanimous support, as did Decelles and Hill Section independent Karen Paul.

The council’s two Republicans and three Progressives have reason to join forces as two minority factions on a council dominated by seven Democrats, who will generally vote in support of a Democratic mayor. The Dems did discreetly flex their political muscles at the new council’s inaugural session on Monday. Behind the scenes, they had engineered unanimous backing for one of their own, Ward 5 councilor Joan Shannon, as council president. Karen Paul had earlier indicated interest in challenging Shannon. But, as a sign that the fix was in, no one nominated Paul for the post.

Shannon’s shift to the council’s center chair caused a couple of her colleagues to stumble over the honorific, “Madam President,” that might be used in referring to her. Rachel Siegel, a feminist and Progressive representing a part of the Old North End, suggested a way to avoid confusion: “Take gender out of the equation. It’s fine to say ‘President Shannon,’” Siegel said, eliciting cheers from many in the audience.

After being sworn in as mayor by black-robed federal judge William Sessions III, Weinberger gave a 10-minute speech in which he offered a narrative of Burlington moving away from “anger and anxiety” and toward “optimism and common purpose.” Weinberger was unsparing in his criticism of his predecessor’s performance, referring to “the paralyzing loss of trust between the mayor’s office, this council and the public.”

Neither Weinberger nor anyone else speaking on Monday evening mentioned the name of Bob Kiss, who, typically, was sitting in near obscurity at the rear of the auditorium. Weinberger’s snub was subtly underscored by his gracious recognition of former council president Kurt Wright. As spectators on the floor and in the balcony stood and applauded, Weinberger presented a proclamation of appreciation to Wright, who ran unsuccessfully as the Republican candidate for mayor.

Weinberger did make positive, if indirect, references to the Progressives’ nearly three-decade occupancy of the mayor’s office. “The new chapter” that is now beginning, Weinberger said, “will rely on old principles that have guided the city so well for decades.” He promised a “return to the combination of prudence and ambition” that, Weinberger said, has long characterized Burlington’s political leadership — Kiss, presumably, excepted.

The new mayor also touched on issues in his speech that liberal Democrats would be likely to mention but that, in Burlington, have been more the preserve of Progressives. Housing costs are too high, Weinberger declared, noting that Burlingtonians’ incomes have remained flat since the onset of the Great Recession three years ago. “Too many of Burlington’s children are living in deep poverty,” he added.

Sisson, meanwhile, did not hesitate to distinguish himself from a controversial predecessor long affiliated with Progressive mayors. Asked what he might have done differently from former CAO Jonathan Leopold in regard to Burlington Telecom, Sisson said, “I would have followed what the certificate of public good required.” He was referring to the set of conditions the state had imposed on BT, including, Sisson noted, the obligation to complete the buildout of the network by June 2008. “Cost overruns were not the way to solve the problem” faced by BT in making good on that provision, he said.

It was the BT meltdown that “spurred me to get involved” in Weinberger’s Campaign and in city government, noted Sisson, a 1978 University of Vermont graduate. Sisson returned to Vermont in 2002.

Weinberger’s first evening in city hall as mayor ended with a brief encounter with some 20 members of Occupy Burlington. They were waiting to present him with a “welcome basket” filled with Passover and Easter items, as well as a copy of the Occupied Wall Street Journal.

The local activists also gave Weinberger a set of recommended actions, including establishment of a year-round shelter for individuals with substance-abuse problems and a moratorium on evictions and foreclosures.

Bill Oetjen, who handed the basket to Weinberger, noted that a measure on the Town Meeting Day ballot in support of Occupy’s demands for economic justice had received a greater degree of support from voters than had Weinberger himself: 78 percent and 57 percent, respectively.

Weinberger replied by expressing his respect for Occupy’s process and message. “Give me a little bit of time to get our feet underneath us,” he added. “And let’s get the conversation started.” 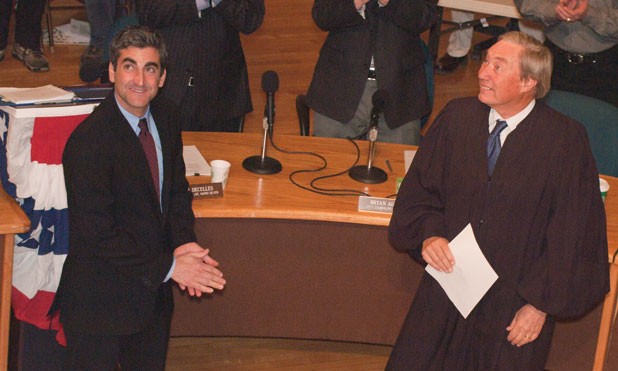 Weinberger Sacks CEDO Director During First Day On The Job

At his inaugural press conference as Burlington’s mayor Tuesday afternoon, Miro Weinberger said he asked all 35 mayoral appointees to polish their résumés and reapply for their jobs by April 30.

“The mayor let Larry know that he wasn’t going to keep him on, and Larry understood that was his position and was gracious about the mayor’s decision,” said the mayor’s spokesman, Mike Kanarick.

Kupferman said he was not surprised by the decision and respected Weinberger’s desire to appoint his own CEDO director.

Weinberger also appointed two former campaign hands to temporary city hall positions during his first day on the job. Kanarick, who served as Weinberger’s campaign spokesman, will serve as assistant to the mayor. Former campaign manager Jessica Nordhaus will fill a vacant position in the city’s human resources department.

Weinberger said he will announce permanent staffing decisions before June 30, when the terms of many mayoral appointees expire.

For more, read the post on our staff blog, Blurt.