On Her Own | Music Feature | Seven Days | Vermont's Independent Voice 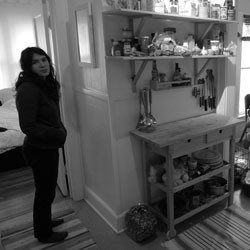 When Ruth Garbus was a kid, she and her sister, Merrill, spent part of each summer wandering freely around Pinewoods, a music summer camp for adults in Plymouth, Mass. It was the kind of place where baroque music wafted out of cabins and adults congregated in recorder ensembles. The Garbus girls’ mother was an instructor who brought them along for Pinewoods’ Early Music Week, during which she gave harpsichord lessons.

“It was insanely beautiful,” recalls Garbus during a recent conversation from her home in Brattleboro. “At night there would be faculty concerts and incredibly educated and accomplished baroque musicians would be playing ... Hearing it now brings me back to my childhood ... It shaped my ears, I think.”

A wide-eyed child with a love of music set loose in a sun-dappled world of recorders and harpsichords reads like a nostalgic prelude to Garbus’ first real experience playing in a band.

After dropping out of the furniture-design program at the Rhode Island School of Design as a teenager, Garbus moved to Brattleboro. There she met musicians and record-store clerks Kyle Thomas and Kurt Weisman. The two were the founders and lead forces behind a local psychedelic-folk band called Feathers. After a while, Thomas and Garbus became close friends, and he invited her to join the band — even though she really didn’t know much about playing music.

“You didn’t necessarily have to be a talented musician to be invited to be in the band,” she says.

Feathers was a sprawling, eight-member collective that performed dramatic, swaying acid-folk with barely tuned acoustic guitars and banjos, ramshackle drum kits, bells, and singing saws. There was a lot of group singing. The band’s sound and style harked back to a bucolic era when long hair, beards, floppy hats, sitars — and, yes, even recorders and harpsichords — ruled.

The band was in the right place at the right time. Around 2004, it caught the ear of Devendra Banhart, who had become the most popular artist in the burgeoning “freak folk” movement. Banhart mentioned the band on a list of music he was listening to for online music mag Pitchfork, which raised Feathers’ profile. He later invited them to work with him on his new album in a studio in Woodstock, N.Y. Some of those collaborations ended up on Banhart’s breakthrough record, Cripple Crow.

“Being in Feathers and getting that amount of attention ... at that time it was like my whole world exploded,” Garbus says. “And I realized there were all these people in all these different places around the world who were listening to this stuff and appreciating it. And that was a real eye-opener … for me.”

Garbus had never been a songwriter. She sang and played a little guitar, bass and drums in Feathers. But she looked around and saw how many people in and associated with the band were writing great songs. As she tells it, it was Kurt Weisman and his brother, Chris — Garbus’ boyfriend since 2006 — who inspired her to start writing.

“In their way, they were like, You can do this,” she says. “They didn’t say that, but that was the message I got from being around them.”

As Garbus became more confident as a songwriter, she wanted to have more of a voice — literally and figuratively — in Feathers. But it wasn’t to be. She was only able to contribute a handful of songs to their self-produced albums and sole “official” release on Banhart’s Gnomonsong label.

So Garbus recorded six songs on a cassette recorder and dubbed the result Ruthie’s Request. She offered copies for sale during a Feathers tour through California, and was thrilled when people bought them — though she admits she only sold about 20 copies.

It took Garbus nearly four years to write and record another album, 2010’s Rendezvous With Rama. She claims she’s a slow writer. But then, she had a lot on her plate.

In late 2009, Garbus, Thomas and Chris Weisman started a new band called Happy Birthday. In a way, it was the opposite of Feathers. Where Feathers was a quasi-utopian collective in which everyone could write, sing and play spaced-out folk, Happy Birthday had a center of gravity: Thomas’ bratty, lo-fi-punk songwriting.

This time, Garbus played drums and had even less input into the creative process — though she insists the band “was like a relationship between three people.” In a surprising turn, Happy Birthday was signed to Seattle’s Sub Pop Records. The band spent the next year-plus on a whirlwind tour promoting its eponymous record across the U.S., Canada and the United Kingdom. Eventually, the group unraveled, and a touring version of the band, sans Weisman, played its final show in London in early November 2010.

“Having your band signed to Sub Pop so fucking early on in its life, it just put an enormous amount of pressure on that didn’t allow for any kind of creative incubation to take place,” Garbus says.

And yet, there was a positive side to the wild ride.

“Obviously, it feels really good to have people saying, ‘Oh, this is good. We like this music ... You guys are making interesting art, and we want it.’”

Since then, Garbus has started to accept more of the solo gigs she was offered — but turned down — while part of Happy Birthday. A few weeks ago, she was the opening act for her sister, Merrill, who’s better known these days as the African-influenced, self-sampling, dance-pop diva tUnE-yArDs. (Yes, she deserves that many modifiers.) Merrill’s manager has encouraged Ruth, arranging gigs for her in places such as Easthampton, Mass., and Montréal.

But Garbus remains close to her roots. This week she’s playing at Angioplasty Media’s Waking Windows festival at the Monkey House in Winooski. She’s sharing a bill with what could be considered the usual suspects: Kurt Weisman and the guy who recorded both Rendezvous With Rama and Happy Birthday’s Sub Pop album: Ryan Power.

But this time, Garbus isn’t part of a band. She isn’t playing second fiddle — or recorder. She’ll be under the lights by herself, playing her own songs.