'ON DISPLAY' Features Performers With and Without Disabilities 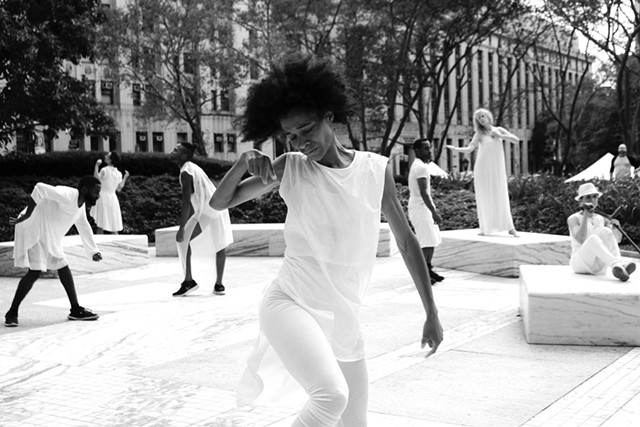 Many of us are taught that staring is rude. The belief is that acknowledging interest — and often difference — in other people is inappropriate social behavior. New York choreographer Heidi Latsky, however, has long been using her performances to prod at this social norm, particularly as it relates to people with physical disabilities.

On Sunday, December 3, at Burlington's Fletcher Free Library, community members are invited to stare. In conjunction with the UN International Day of Persons With Disabilities, Burlington choreographer Toby MacNutt will present a local iteration of the Latsky initiative "ON DISPLAY." For one hour, local performers — with and without physical disabilities — will transform themselves into living sculptures by wearing white costumes and moving slowly in improvisational dance.

They'll be in good company: "ON DISPLAY" performances will be taking place all weekend, from Montréal to Buenos Aires.

At a recent rehearsal at South Burlington's Spotlight Vermont studio, MacNutt said that the aim of the work is "owning how you are seen and challenging the idea that you're not supposed to stare."

According to the Heidi Latsky Dance website, the performance is a "commentary on the body as spectacle and society's obsession with body image. It turns a cast of diverse and extreme bodies into a sculpture court where the performers are the sculptures."

MacNutt, who identifies as nonbinary and uses they/them pronouns, first encountered Latsky at a workshop offered at Burlington's FlynnSpace. They went on to tour with the company's "GIMP" project from 2009 to '11. MacNutt lives with Ehlers-Danlos syndrome, a connective-tissue disorder that has meant a progression from living with an invisible disability to using crutches, then a wheelchair. MacNutt is currently training a much-loved service dog.

"Disabled doesn't have to mean broken," says MacNutt in the 2010 GIMP documentary. "It's just different."

As a choreographer, they explained that each "ON DISPLAY" performance is organized around a movement score — a set of ideas, rules and prompts that guide the action. Sunday's performance is focused on a theme of "morphing and stillness."

"I'll do better if I say, 'think about floating,' instead of saying, 'lift your arm,'" said MacNutt.

The focus on descriptive or quality-focused words resonates with "ON DISPLAY" dancer Jill Allen, a Burlington resident born with cerebral palsy. "Sometimes I don't know all of the things that could work for me," she said, "but having that open-ended phrase is really inclusive and makes me feel really good about myself."

At rehearsal, the atmosphere of exchange with other dancers was also exciting to Allen. During improvisational exercises, she noted that another dancer was inspired to change her pace after seeing Allen zoom across the floor in her chair. And such dialogues in motion were reciprocal: "Even though I can't get on the floor and contort like these two able-bodied-appearing women," Allen said, "I could look at them and then say, 'Aha! My chair can move like this.'"

Helping others to redefine dance has been an important part of Allen's journey within the medium. She recalled disappointing experiences in her past in which viewers didn't recognize her movement as dance.

"They'd say something like, 'Well, I could see you flailing around,'" she said, "[but] that is me dancing! Everything that's in your ability is dance."

Cerebral palsy, Allen explained, includes symptoms can change over time. "Here," she said, folding her right hand and touching her fingers, "figure out how to describe this in the newspaper." The motion is one she taught herself through practice.

"My favorite experience," MacNutt said, "is when someone comes up after a performance and asks, 'Does this mean I could do dance?' That look on the face of a kid with crutches is so good."

Correction, November 30, 2017: An earlier version of this story misstated the cause of cerebral palsy. It is not hereditary.