“The Advocacy Team” shows what it can do — on camera 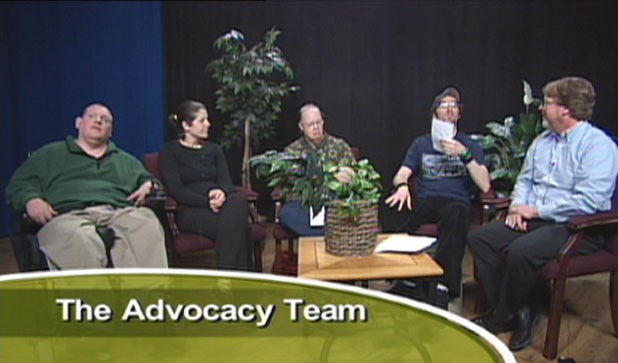 Monday, April 27. Production Manager Bill Simmon has just given a thumbs-up from his control room at the Burlington studios of Vermont Community Access Media (VCAM). The show’s theme song has played, and now it’s time for the hosts to introduce themselves.

Though he’s not the host of “Deal or No Deal,” Forest Scrivens, 30, does make merry on local television screens several times a week. Today his co-hosts are not amused. On Scrivens’ right, Bill Villemaire laughs mockingly.

I am a guest on “The Advocacy Team,” an interview show produced at VCAM through Champlain Community Services. CCS is a nonprofit that provides services to its “consumers” — people with developmental disabilities — that range from coordinating housing and care to finding employment. The community-access TV show grew out of weekly meetings of CCS’ self-advocacy group, Champlain Voices, which teaches participants that they can make their own decisions regarding medical care, living circumstances and employment. In 2003, a vocal few came up with the idea of televising their revolution.

“We didn’t know if we were going to end up editing or if we were going to be talking,” says Nichols, who is confined to a wheelchair. The first episodes of “The Advocacy Team” featured him interviewing students in the halls of Champlain Valley Union High School. Villemaire and four others joined soon after — “I could name everyone involved, but we don’t have that much time,” says Villemaire with a smile. Several members left the team early on, leaving newbies Scrivens and a gentle giant by the name of Mike Boutie.

“I heard about the show from a different agency called Youth and Family Services at the Chace Mill,” says Scrivens. “I had a tutor to help me improve my reading skills, and at one point she told me that Champlain Vocational Services had a TV show.” When I note that Scrivens’ tutor must have thought he had a face for TV, Villemaire pipes up, “We all have.”

Villemaire elaborates that interview skills were a problem initially. Scrivens takes exception to that account: “Maybe it was natural for me. It depends on the other people.”

Once Boutie left the scene, the cast was cemented, with a few brief exceptions. Producers have come and gone, imbuing the show with their unique flavors. David Ramsden, 46, a Community Inclusion Facilitator at CCS, has filled the seat since last fall. He takes a hands-off approach, preferring to allow the stars to run the show to the best of their abilities.

When they arrive in the studio, the hosts place potted plants and tables and chairs, and write their own questions. Ramsden sits in on most interviews but speaks little. During today’s session, he remains in the control room while I get acquainted with the members of the team.

Scrivens, the 1997 Winooski High School prom king, brought media experience to the show. “I was already popular on St. Michael’s College radio station. I was on Saturday evenings for one summer with DJ Craig Mitchell, a buddy of mine,” he reveals. Scrivens plays drums and once sang with a jam band called The Neutrals. Currently, his focus is on DJing parties. Past clients have included CCS, Best Buddies and the Special Olympics. “It seems like they should get more DJ gigs for me to do,” Scrivens hints.

He counts CK Coin of WOKO as his favorite guest. “Forest only wants to get disc jockeys,” Villemaire opines. But everyone has their preferences. Nichols practically glows when discussing a guest spot by cowboy singer and VCAM perennial Roadhouse Charlie.

Ever the charmer, Villemaire tells me after the show that I am his new favorite. On camera, though, he stolidly states, “I prefer people in social services and the special-ed field.”

That’s no surprise for a man who’s made a name for himself in that milieu. In 1977, at age 21, Villemaire had not yet completed his education at Burlington High School. With the help of his mother, Theresa, and then-State Representative Lorraine Graham, the Vermont Legislature eventually passed H.55, or “Bill’s Bill,” which enabled Villemaire and other developmentally delayed students to earn their diplomas with their peers rather than being funneled into separate institutions. In 2006, Emily Anderson of VSA Arts Vermont wrote and produced Bill’s Bill, a play based on Villemaire’s struggle for education equality. He appeared in the subsequent film version, too. “It was a civil-rights piece at first,” Villemaire says. “I was a pioneer.”

Villemaire, who has Down syndrome, heads the panel with a sense of humor and an iron fist. When asked to name his favorite music, the staff sophisticate rattles off much of the Rodgers & Hammerstein catalogue like Frasier Crane with an extra chromosome. He also professes a fondness for the music of Jim Nabors.

At nearly 53, Villemaire is the oldest of the team. When I tell him he looks younger, he is quick to respond, “I don’t look it, but my hair does.”

Also the de facto leader of the gang, Villemaire makes clear it’s his way or the highway. At the start of this episode, he opts to change things up by introducing Scrivens by his middle name, Ethan.

“Strange that you’re calling me by my middle name instead of my first name, Forest,” Scrivens politely protests. Villemaire waves his hand derisively and replies, “Well, say hi.”

Nichols recalls an episode in which they discussed Bill’s Bill: “The issue was, [Villemaire] was interviewing me, and he wasn’t looking at me or Charlie [Messing, their former facilitator].”

By all accounts, though, he gets the job done. Anderson of VSA Arts raves about the experience of being grilled by the guys. “They ask questions that are so deep,” she marvels. “They really take you by surprise.”

People who work with the disabled make up the bulk of the guests on “The Advocacy Team,” but the hosts are always on the hunt for recruits. “If I go to certain events, I get people’s business cards,” says Scrivens.

Still, all three agree that some of their favorite episodes have been what they call “The Gentlemen’s Show” — panel discussions among themselves. Villemaire explains the name: “We’re all men and we try to be gentle.”

Ramsden says Nichols, 48, is the gentlest of all. When asked about each of the hosts’ strengths, Ramsden credits Villemaire with wit and charm as well as the ability to come up with the most insightful questions. Scrivens, he says, brings honesty, directness and imagination. He lauds Nichols for his “compassion for others and his enthusiasm.”

What I find striking about Nichols is his self-deprecating sense of humor. When I ask Villemaire what qualities he wishes he could borrow from the other hosts, he characteristically declares he would choose none. “You don’t want to be in a wheelchair, Bill?” Nichols joshes, to Villemaire’s horror.

Nichols complains that he would love to write more, but finds it difficult to focus on the page due to a blind eye; he also wishes he could fish as often as he once did. Currently he works at the airport, greeting visitors and directing them to points of interest.

Scrivens earns his paycheck stocking shelves at Sears, dressed in rock ’n’ roll T-shirts and his new favorite — velvet suits. Villemaire, formerly employed at the Fletcher Free Library, now chooses to focus full-time on the show and writing educational content for the CCS newsletter, D.I.Y. He says the publication allows him and Ramsden, its editor, to put their “academic abilities to good use.”

When I ask how many shows they have produced, the hosts throw out numbers ranging from 104 to 200, but I later learn this episode is number 111. Of their 100th episode — a milestone for any TV show — Scrivens quips, “We forgot to have a cake and we forgot to celebrate.”

In the future, he and Nichols hope to return to the original format of on-location shoots, including a tour of Seven Days. Scrivens is also brushing up on his editing skills with an extracurricular project — an audition tape for “The Bachelor.”

I end our interview by asking the accomplished team what advice they’d offer to other disabled adults. Villemaire is quick to reply, “I would tell them not to be segregated.”

Nichols takes it a step further, saying he prefers not to be called “handicapped.” Scrivens, who’s had the most work experience and calls himself a “friend of CCS,” counsels, “Don’t tell everybody that you know you have a disability. Not everybody respects people with disabilities. Try not to get bothered by it, and try not to be embarrassed that you have one.”

All three agree that they fight not to be overlooked. Nichols closes the show with a plea to those who can’t or won’t understand: “I feel like you’re missing something there. If you don’t see it, how can you see it?”