On a Burlington Mural, a Black Madonna Conveys Liberation and Love 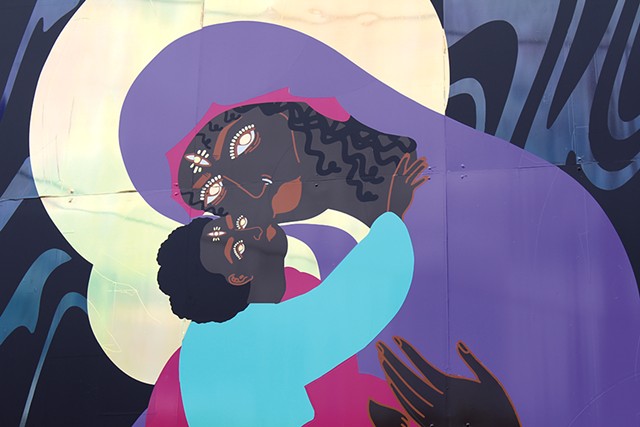 Raphaella Brice and Josie Bunnell are dwarfed by their mural. It's 16 feet high and 12 feet wide, hanging well above their heads on the east wall of Fletcher Free Library in Burlington. Installed earlier this summer, "Black Freedom, Black Madonna & the Black Child of Hope" features a dramatic mother-and-child motif in vibrant colors against a swirling black and gray background.

The city's Office of Racial Equity, Inclusion and Belonging and Burlington City Arts commissioned the mural as part of the Juneteenth celebration; BCA facilitated the process, according to BCA assistant director Sara Katz. A selection committee enthusiastically chose Brice's design from among the applicants.

"Her artistic style was universally appreciated by everyone on the committee," Katz said. "It's a unique, bold style. Raphaella also had an interesting write-up and perspective on the subject of freedom and hope for the future. I think the panel responded to that as much as to the imagery."

For her mural design, Brice called on both her Haitian heritage (her parents were immigrants) and her Catholic upbringing. Her Madonna is a representation of Erzulie Dantor, a fierce and protective Vodou spirit who is associated with the country's hard-won independence from France in 1804. "Juneteenth is all about Black liberation and reclaiming history," Brice said. This deity is about winning freedom.

Brice added that the symbol isn't meant to be specifically religious. A plaque below the mural explains that Erzulie "is portrayed as a Black Madonna holding a child as a symbol of maternal love, interconnectedness and transformation." The mural "ties the human experience together and offers an optimistic view of the future," the text concludes. 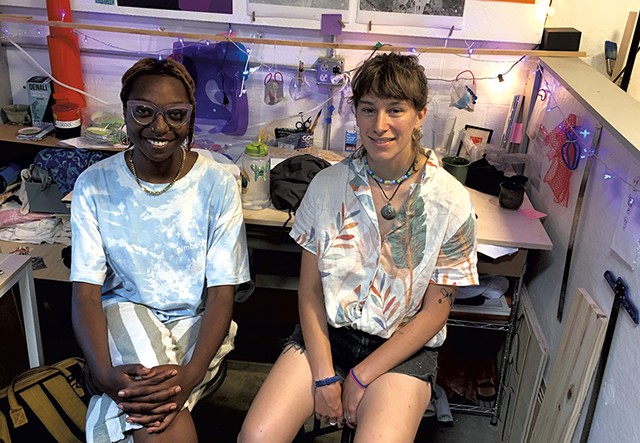 Brice and Bunnell were both recent artists-in-residence at Generator, Burlington's makerspace. Now the twentysomething women share a small studio there. Their respective skills led to a fortuitous collaboration. Brice created her design as a digital illustration, but she had never worked with vinyl and didn't know how to use a vinyl cutter. Bunnell, who is primarily a printmaker, had worked with the material often and teaches a class on vinyl cutting.

Bunnell explained that each color has a separate digital file. "We ended up sending 10 drawings to the vinyl cutter," she said. The pair cut the mural's shapes and affixed the puzzle-like pieces to aluminum panels. "It really is kind of a big sticker," Bunnell said. Sammel Group of Essex Junction installed the panels at the library.

For both Brice and Bunnell, making "Black Freedom" was an unexpected achievement. From Connecticut, Brice studied international relations and French at Manhattanville College and didn't begin making visual art until after graduation. Now her work is rapidly evolving, she said. Bunnell, who is from New Jersey, majored in printmaking and astronomy at Bennington College. "It's tricky trying to find my place since graduating in 2019," she said. "It's hard to do art when you have this adult life, paying bills. I feel like this is a fresh start for me."

"Black Freedom, Black Madonna & the Black Child of Hope" will remain in place for at least a year, Katz said — or as long as the big sticker holds up against Vermont weather. Learn more about both artists at generatorvt.com.