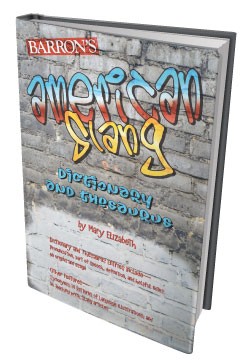 With so many ways to connect in our communication-obsessed world, the casual kickiness of slang creeps into daily life via many avenues. Laid-back lingo fills text messages, blog posts, Tweets and emails, as well as conversation. Who has time to pen formal prose in an e, even to the boss? LOL! But where do you turn when you come across an unfamiliar term? Asking someone might mark you as hopelessly unhip.

Essex author Mary Elizabeth has crafted a handy and entertaining solution: Barron’s American Slang Dictionary and Thesaurus. Elizabeth privately calls her hybrid reference guide a “dictionasaurus.” It defines words and phrases and provides synonyms for them.

The project took Elizabeth nearly five years from conception to publication. The freelance educational-product developer has written other language-related books — on poetry, spelling and speech — for Barron’s, a large publisher of instructional titles. What inspired her to devote so much time to the seemingly arcane pursuit of compiling a nearly 600-page reference tome?

One catalyst: realizing how slang poses a hurdle to non-native speakers of English, such as her neighbors and some students at the University of Vermont, where Elizabeth teaches continuing education courses. “It’s important to explain what these words are and how they’re used,” she says, “so people can make decisions about how they want to use [them]; how they want to appear. And not embarrass themselves or others unnecessarily.”

The author believes a traditional thesaurus can fall short in multiple ways: by not providing exact definitions, distinguishing shades of meaning among synonyms or giving the appropriate context for different word choices. “So one of my thoughts was Well, wouldn’t it be helpful to have that information built into a thesaurus?” Elizabeth recalls. “So that when you got a word, you got everything you needed.”

Of course, taking on the entire English tongue was too ambitious. Slang, however, seemed a “potentially useful” target, since it comprises “a small section of language that is highly complicated to people,” Elizabeth explains. “It is idiomatic, which means that even if you know the words, you can’t figure out what it means. The sum of the parts isn’t the same as the whole.”

The book’s detailed intro hones the definition of slang itself in part by denoting what slang is not: professional jargon, regional dialect or insider-speak. Slang is, Elizabeth writes, “nonstandard and nontechnical English, used at the extreme end of informal language and across the population ... It is often playful, sometimes outspoken, and frequently adds emotional intensity to discourse.” Word! (See page 248: “A casual greeting and exclamation of agreement.”)

In the age of Google and websites such as Urban Dictionary, why create a reference book at all? Elizabeth disputes that a few mouse clicks yield the same info as her guide. “There’s still — for me, at least — a certain authority connected with the publishing process in print,” she states. She emphasizes the importance, and usefulness, of editorial oversight. Urban Dictionary “is anybody saying anything they want,” she notes. “It has no authority. And sometimes, it’s just ‘in’ jokes ... Sometimes, it’s just one person thinking they’re funny, like defining a jerk as ‘Joe down the street.’

“With the physical book,” Elizabeth continues, “there are some things that are just different.” She gives the simple example of being able to stick a finger in one section and flip back and forth to another. This old-fashioned browsing allows the reader to explore and find patterns not visible when scrolling or clicking in an electronic format — and to stumble on some wild expressions by chance. “A flea short of an infestation” means unintelligent, FYI.

Won’t a print source quickly become outdated? In this case, author and publisher specifically agreed to avoid trendy terms. And Elizabeth challenges the conventional wisdom about modern communication hastening language turnover. “I have a suspicion,” she ventures, “that the international use of English and the cross-cultural conversation on the Internet in English may be extending the life of some slang.” Awesome! (See page 9.)