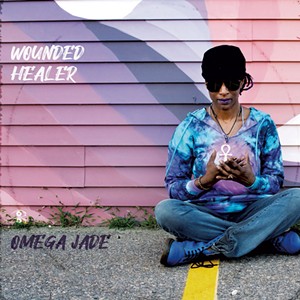 Omega Jade, a West Coast transplant, has been making huge waves in the Vermont hip-hop scene the past two years as a rapper, comedian and ambitious promoter of both. Her work, whether musical or comedic, is bluntly honest and cheerfully offensive in equal measure. Curiously, on her debut album as a rapper, Wounded Healer, Jade's comedy hardly bleeds into her music. And the few jokes that do appear on this album are all at her own expense.

After witnessing Jade's growth over the past year of steady singles, I had hoped to see what she had evolved into after all that formative studio experience. This will have to wait until her second album, though. Wounded Healer is almost entirely a collection of those same singles.

Appropriately enough, the album kicks off with "I Rediscovered Me," Jade's first Rico James collaboration and her introduction to the Queen City scene. A heartfelt, deeply personal testimonial about recovery from abuse, it's also the musical template for most of what follows.

Jade's delivery is understated to the point of being as much spoken word as rap. Even when she kindles some fire in the belly, she sounds more like an orator or preacher than, say, Rah Digga or Missy Elliott. The beats are low-key and often sparsely produced, relying on loop hypnosis to sell the lyrics.

The big exception here is "War Cry," a collaboration of Jade and the hilarious and talented Bitzzzzz. (That's five Zs; make sure you get it right.) "Rebel or die" goes the chorus, and Jade brings energy to match the dark, urgent boom-bap beat. It's also the only brand-new song on the album, so perhaps this is a sign of things to come.

This is an album on which the lyrics mostly stand on their own, but Jade's increased technical skill as a rapper is spotlight-ready. "United States of Dope Men" is a kaleidoscopic indictment of both the War on Drugs and toxic masculinity. "Truth of the Matter," featuring local poet/emcee/educator Rajnii Eddins, tackles police racism head-on.

The heart of the album, however, is Jade's personal journey and testimony. "Tricks of the Trade (Petty With a Purpose)" takes a self-deprecating look at how she copes with the stress of daily life. "Power of My Mantra" opts for a more serious approach. It's a knockout piece of writing, an idiosyncratic and eloquent manifesto.

The song also exemplifies why this album feels underwhelming: Too many of the cuts are essentially demos, verses cut over loops, without much orchestration or ornamentation — or samples or scratches or drops or variations. No matter how good the writing, these are all necessary touches.

So, inevitably, Wounded Healer sounds more like a compilation than an organic debut album. That's hardly a bad thing — it's important that Omega Jade's journey be documented outside of the internet. Yet, now that she has a solid handle on her new craft and the process behind it, you have to wonder what kind of risks she'll take from here.

Wounded Healer is available at equaleyesrecords.bandcamp.com.