Local musicians get back to basics with cassette recording 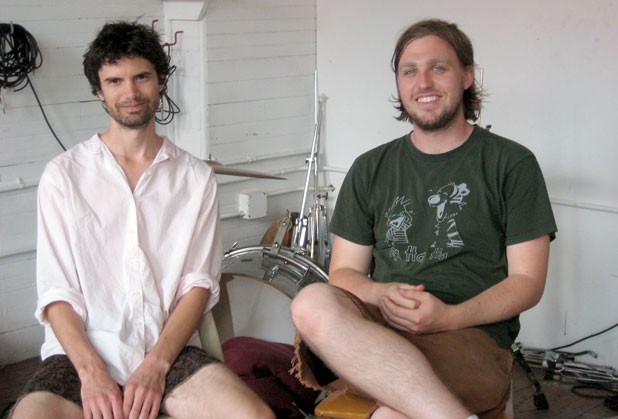 Whether you’re a baby boomer with kids who download, or you’re one of millions who trade music online, you know that music distribution has changed radically over the last decade. From Napster to iTunes, music has become ubiquitous and breezily easy to access online — whether you want to pay for it or not.

The process of recording music has undergone a similar transformation. Bedroom studios are easy to set up, and anyone with a laptop, a few instruments, and a microphone or two can cut an album without spending expensive hours in a studio. In fact, you can even use free software and the mic on your computer. Voila! Your own basement tapes.

But when Paddy Reagan (Cannon Fodder, Paper Castles) teamed up with fellow local musician and producer Ryan Power to record Burlington-based songwriter Maryse Smith’s new album, he proposed an idea: Why not use a cassette-tape four-track? A classic fixture in bedrooms and jam spaces during the 1980s and 1990s, small, portable machines such as the Tascam 424 made recording possible on the cheap, even though you only had four tracks to work with and had to record onto a cassette tape. (Remember those?)

Curious to hear more, Seven Days recently sat down with Reagan and Power in a sunny loft studio on College Street to talk about recording on cassettes in the era of hard disks and MacBooks.

SEVEN DAYS: You guys are resourceful, experienced musicians. What was the motivation for working with what many would consider a throwback format that people don’t use anymore?

PADDY REAGAN: I had [the four-track] because one of the guys from The Powder Kegs left it here. And actually, I was listening to an Elliott Smith album today and it reminded me of why I even had the idea. And I don’t know if I even brought this up with Ryan. That sort of sparked my interest in using it. And I didn’t know a ton about it. One of the things I had been talking about for over a year was recording Maryse’s songs, so I wanted to get that done, and I saw an avenue to do it. And I didn’t necessarily have a ton of money to do it. So I had this thing, I had this space, and I talked with Ryan about doing it, so it was just sort of a necessity thing. And I really like the sound we got with it.

SD: Ryan, what were your initial thoughts about it?

RYAN POWER: I thought it was a great idea, just ’cause tape definitely captures sound in a different way than a computer would. You have more limitations, in a way, with the four-track, but that frees you up to not overthink things. Recording on a four-track gives the recording a certain sound, sort of like a Polaroid picture, instead of a cold digital photo. It sounds intimate.

SD: There is that idea, but as you worked on the project, did it go the way you thought it would?

PR: It’s cool because we had four tracks to deal with, so we’d have to figure out what would go on the first track so we could pile other things on. There was one track where Jenny Montana sang backup and I played bass, so those are on one track.

RP: And if you’re recording that way, you’re already making all of these mixing decisions, because the level you get between the background vocal and the bass, that’s it. You can’t change it. You’re making a lot of decisions in the moment, which is good, because with computer technology, you can save a lot of decisions for later, and it can become a hellish process sometimes.

PR: The Cannon Fodder recordings were [done in digital and were] really cool, but a lot of the guitar solos are super-Frankenstein guitar solos, where it’s just like…

PR: Yeah, even to the extent that we took one guitar solo from one track and dumped it on another track, because we ended up using that take as “the one.” But the guitar solo was cool on this one, so we dumped it over, took some of the spaces out, and the phrasing sounds genius…

SD: How do you feel about the difference between that and what you guys were doing, between using digital editing to make music instead of playing it?

RP: I think it’s fine as long as long as it still sounds coherent, as long as it doesn’t sound like it was all plopped together. I record on the computer mainly, and I use the computer as my sketchpad and edit and cut and paste stuff all the time, so I’m completely open to doing that. And you can approach a computer like a tape machine. You just have to not take advantage of all these options you have — the editing and such.

PR: I think something Ryan said that clarifies my view of either of those is that in art, in general today, there’s the digital world and the analog world. And it’s all just a decision. I think we’re really lucky to have both of them. I was really psyched to do Paper Castles’ recording on Ryan’s [analog] eight-track, and then I bought some used digital gear from him, you know? We’re just incredibly fortunate to have that.

RP: I kind of felt bad selling to him, because now he has all these options … [Laughter] And all those options can lead you down different places. I mean, it’s good. You just have to not get too neurotic about it, you know?