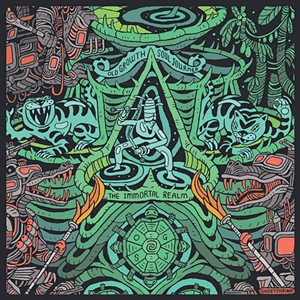 Seventeenth-century philosopher Baruch Spinoza reproached the credulous for their tendency to conflate religion, science and superstition. He saw this confusion as a consequence of personal beliefs and a threat to understanding the true causes of life's many situations.

Does a Dutch thinker of the Enlightenment have anything in common with a 21st-century "conscious hip-hop" artist in Vermont?

At first blush, a listener might think Old Growth SoulJourner's latest album, The Immortal Realm, smacks of similar rational wisdom. For anyone prone to credulity, maybe it does. But you needn't know anything about philosophy to suspect that the central Vermont artist's heady concoction of fat grooves, chill vibes and guru pretensions is more about impassioned rhyme than dispassionate reason.

Inspired by baggy notions of truth and various soul, body, mind and time tropes, Old Growth SoulJourner (a play on "soldier" and "sojourner") conscripts his beliefs into precise units of verse. He raps these — sometimes alongside guest performers and sometimes exquisitely — over a sprawling hybrid of electro-organic instrumentation and steady, bumping beats.

Punctuated by tone and melody, OG's rapping is foundational to this sonic powerhouse while raising its roof. Each track is sturdily built and well balanced, with warm, huge vocal notes layered atop hooky, head-bopping arrangements. The first track, "Enter the Immortal Realm," provides a sonic preview of what's next: 18 tracks of groove-driven, roots-inspired hip-hop intended to illuminate and pacify.

The album can be weighty with big, impassioned ideas about healing a world in peril, but as OG explains on "By My Word," he's "breaking it down / ... / kicking the truth / ... / tis the season of peak solutions / we see the need for transformation in a major movement." Nevertheless, his writing expresses soul, wit and wordplay. On "OG Like Me," the rap-sung lyrics bop up, down and around the guitar's ska-style upstrokes, "unwinding the riddle," OG self-reflexively raps, that is himself.

On "Clean From the Start," there's an echo of Eminem's "Lose Yourself" as OG raps: "Behold the remedy / no, no enemy / prone to grow steadily / show the whole recipe ... I am an entity / raw, divine energy." The following track, "Work the Word," calls on so many disparate motifs that one can lose track of its primary but ultimately inscrutable aim: Change work by working the word.

Performed and written almost entirely by OG himself, The Immortal Realm demonstrates his ability to modify — without breaking — the pleasant patterns of assonance and consonance on which his fire-breathing vocals rely. But other Vermont artists also contributed: DJ Kanganade scratches on the third track, "Trod On"; his tight scribbling evokes some of the scratch masters from Philly's DJ scene heyday. The penultimate track, "Alchemy," features local hip-hop artists including Humble, MAVSTAR, Learic and Sed One.

The album is likely to delight listeners who have a penchant for bongs, long boards and unabashed deep-talk. The Immortal Realm is available at oldgrowthsouljourner.bandcamp.com.