Old and Young Make the Rounds at Skateland

It's a frigid, seemingly desolate evening in the big-box cluster at the mouth of Susie Wilson Road in Essex. But inside one of those nondescript buildings, disco balls shimmer and colored lights wink to the electro-funk pulse of the Gap Band's "You Dropped a Bomb on Me." Speckled by those lights, five adults on roller skates circle the rink in neat formation, doing a synchronized shuffle.

It's the "Vermont Shuffle," specifies Gordon Vincent of Milton, a shuffler who's glided to the center of the rink to speak to a reporter. He's teaching the steps to his teenage daughter, Savannah Billado-Vincent, who has accompanied him to Skateland Vermont this Thursday evening. On weekends, Vincent says, the line of shufflers can swell to 30 or 40 — many of them friends from way back.

Asked who invented the Vermont Shuffle, Vincent shrugs. "It's traditional. Kids taught each other."

Tradition means something at Skateland Vermont, a brand-new roller rink — it opened on December 26 — with an old-school ethos. Many of the experienced skaters who whip around the 80-by-180-foot cement floor on quads — four-wheeled skates — are middle-aged parents and professionals. They have vivid memories of skating, dating and recreating on roller rinks during their 1980s heyday, and now they're eager to share the experience with their kids.

Many of these Gen Xers mention the 2000 closing of Vermont's last rink — Williston's Skateland — as a sad day in their lives. They talk about traveling to New York and New Hampshire for a smooth floor to spin their wheels. And they express gratitude to Scott Perren, Skateland Vermont's owner, for getting them rolling again.

Though Perren has a family connection to the original Skateland's owners, the new business is a separate entity. Like the old one, it's a family affair. Perren's wife, Jennifer, and his daughter, Kristina Hermanson, manage the place. Scott and Jennifer's 8-year-old son, Aiden, started skating when the rink floor was laid and hasn't stopped.

"I love it," he says, demonstrating rapid footwork typical of "roller jam" — essentially break dancing on skates — in the snack bar. "I like how you can dance and do whatever you want."

The soft-spoken Perren père seems to be everywhere in the rink at once — in the rental shop selling quads to a customer, in the DJ booth or zipping across the rink floor with élan. (He has a competitive background in artistic skating, the rolling equivalent of figure skating.)

Hermanson says opening the rink was her dad's dream: "He's had this vision for a long time. We all thought that he was crazy, but he's seen it through."

Permitting and building of the new structure took three years. While the multipart development met some opposition, according to the Essex Reporter, Skateland's Facebook page — currently above 10,000 likes — reflected the community's support and anticipation.

During Skateland's first week, Hermanson says, about 4,000 people came through its doors, and weekends still sell out. The rink has a capacity of 642, but the Perrens cap the number of skaters at 450, with one "skate guard" to oversee every 150 patrons. Theme nights, 18-plus nights, skating lessons and birthday parties are all in the works.

In the fluorescent-bright snack bar, which contrasts with the disco atmosphere of the rink proper, AmyBeth Fredricksen of Essex and her two daughters are preparing for their skate. "Roller-skating was a big part of my social life back in the '80s," Fredricksen says. Now she has a "goal to skate backwards by the time I'm 50. I'm 44, but I think I can do it!"

Fredricksen's teenage daughter has special needs, she says, adding, "This is a godsend for us. It's a place where the whole family can go. Everyone's having fun, everyone's together."

That's an oft-heard refrain at Skateland. Melissa Whitney, taking a break from skating with her friend, Emilee Barron, remembers the role that Williston Skateland played in her younger years. "It kept me out of trouble as a kid," she says. "Everybody else was partying; I was there."

After the rink closed, Whitney traveled out of state to skate and joined the now-defunct Burlington Bombers roller-derby league. She's been going to Skateland Vermont four nights a week since it opened — and claims she's lost 15 pounds in the process. "Now my kids are getting the same experience [I did]," Whitney says.

"We can see where they are and what they're doing," notes Barron, who's new to skating and feels safer on in-lines. (Skateland rents both types of skate.)

Tonia Bouchard of Hinesburg, one of the Vermont Shufflers, met her husband, David, at the first Skateland when she was 16. Now they're here with their 17-year-old son, Cooper. When the Williston rink closed, "it gave us nowhere to hang out," says Tonia, who's wearing her vintage, 30-year-old quads.

Vincent likewise says he "grew up" at Skateland; now he brings his daughter to the Essex rink. Virtually all the parents Seven Days talks to note with approval that Skateland is a screen-free oasis, thanks to its no-cellphones policy.

The kids don't seem to mind. "I bring a lot of friends here," Savannah Billado-Vincent says. "They put down their phones and make new friends." Cooper Bouchard says he likes getting a calf workout and listening to "older music."

Indeed, given the roller rink's classic combination of disco, sport and danger-induced adrenaline infusion — particularly for skaters who haven't yet figured out how to stop — its role as community matchmaker can't be underestimated. Clint Wheeler, a former Green Mountain Derby Dames coach, recalls why he learned to skate as a kid: "I realized it's a really good way to get girls." 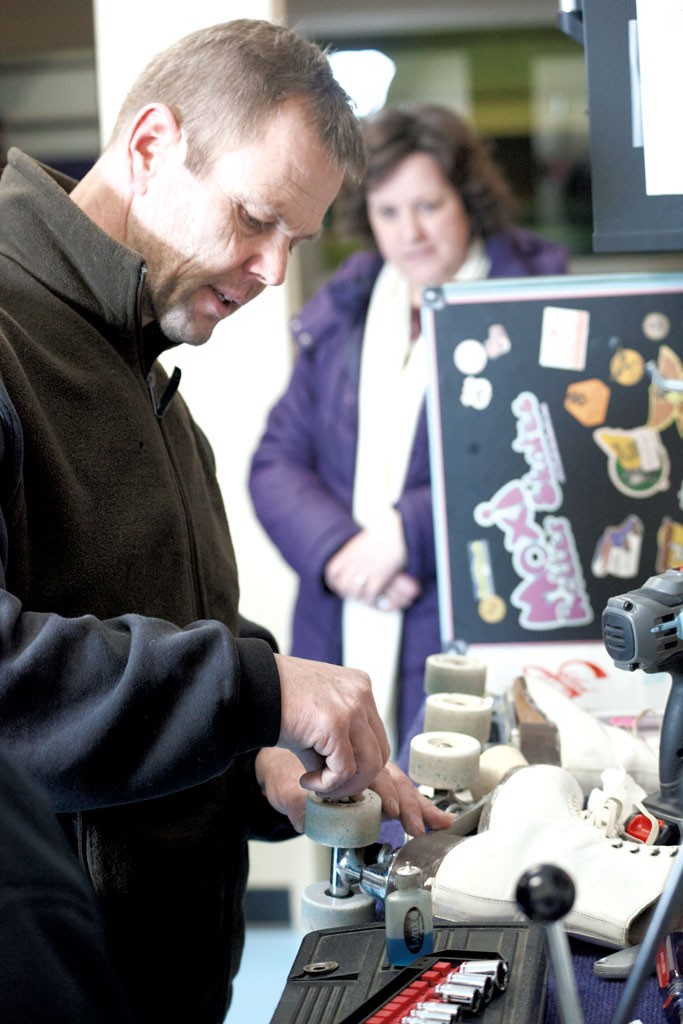 If that's true, Wheeler's son, Shane, should do well in that department. A veteran of jam skating competitions, he circles the floor rapidly, deftly cross-stepping past the cautious, heavy-footed beginners.

Before Skateland, "I used to skate on the wood floor," Shane says. "I'd push all the furniture out." Growing up in a state without a rink, how'd he learn his jam moves? YouTube, of course.

Kyle Elliott is a different kind of "jammer" — he skates for the Mean Mountain Boys, the local men's roller-derby team. Derby dames and dudes have a significant presence at Skateland, coexisting with shufflers, roller jammers and newcomers who are just struggling to get around the rink. (The beginner's secret to not falling over backward on quads? Bend your knees and skate like a penguin, say the experienced skaters.)

While some derby veterans say they got involved in the rough-and-tumble sport mainly to keep roller-skating, Elliott has a different background — ice hockey. He comes to Skateland to practice, he says, but also "to get away from everything. I just shut everything out."

Helping to maintain that hermetic ambiance is Mike Wilhide in the DJ booth. It's his job to instruct the skaters to reverse direction once a night — and then, after a few songs, to send them back in the usual counterclockwise circuit.

When it comes to requests, "everybody loves the '80s," says Wilhide, whose résumé includes a long list of local radio stations. "That's one of our biggest things."

Young Cooper Bouchard glides up to the window to request Stevie Wonder. "You need to change songs," says Wilhide, shaking his head in mock disapproval. "That's the only song you want to skate to!" Granted, not everybody has retro tastes: The current No. 1 requested song at Skateland, says Wilhide, is "Uptown Funk" by Mark Ronson.

When 10 p.m. rolls around, the snack bar stops grilling, and glaring lights snap on over the rink floor. The mirror balls still dangle from the ceiling, but gone are the hypnotic light patterns that make Skateland feel like an eternal prom circa 1985. The Vermont Shuffle is just a memory until the next session, when Vincent will once again work with his daughter on mastering the tricky crossover.

Roller disco may seem like an unlikely common ground for adults who remember when "1999" was on the charts and kids who barely remember the 20th century. But at Skateland, it works. "He's sharing his childhood with me," says Billado-Vincent of her dad, "and I'm sharing my memories with him."