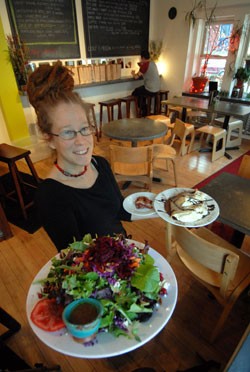 In 2006, when Crystal Maderia and Alanna Dorf opened Montpelier’s Kismet — a tiny café serving locally sourced fare on an out-of-the-way street — expansion was already on their minds. “It was in our business plan from the beginning that if things went well, we’d move downtown in our third year,” Maderia says.

And so, with customers begging for more seats, the women began scoping out new properties and thinking about how to expand the menu to include dinner. “We definitely want more meat options,” Maderia muses. “We’ll have more soups, pastries, things of that nature.”

They likely won’t add more crêpes to the menu. Although the 11 French wraps sell well, Kismet faces stiff competition from The Skinny Pancake: The owners of Burlington’s crêperie are opening a Montpelier location in May.

When SP co-owner Benjy Adler began looking to expand his successful venture, he considered towns all around New England, including Northampton, Massachusetts. But in the end, he and his business partners settled on Vermont’s capital. “In the spirit of our social mission ... we wanted to stay close to our original food shed,” Adler explains. “We also heard from the people of Montpelier that they needed and wanted more food, and that we were a great fit.”

While he knew about Kismet and the fact they had crêpes on the menu, Adler attests that he was unaware of their expansion plans when he selected a downtown spot for his order-at-the-counter venture. “I didn’t think there would be a disastrous conflict of interest,” he explains. In its current location, he notes, Kismet has shorter hours and full service.

He learned about Kismet’s expansion plans when he reached out to Maderia last Friday via email to let her know The SP was coming to town. In her response, she noted, “Honestly, your menu, your prices and your appeal [are] very similar to ours.” Over the course of the weekend, the e-conversation — which Maderia posted in full on her business blog — got a touch acrimonious. As of Monday this week, the pair had a conversation that Adler believes improved the relationship, though it didn’t resolve the underlying issues.

“We can’t turn back,” Adler admits. “We’ve bought all the necessary equipment ... Contractors have poured their time into giving us estimates. I have people expecting to start work for us ... A guy that I met working in New Orleans is driving across the country to have a job with me because he can’t find a job anywhere.”

Adler also says that he has done his best to work with, not against, Montpelier business owners. “I contacted all the music venues in town to talk about the prospect of bringing music, and they asked me not to,” Adler says. He also stresses his commitment to helping improve the local food scene — something to which Maderia is also committed.

“We don’t have an Intervale. The businesses here that depend on local foods do compete for ingredients,” Maderia suggests. “This winter I’ve been making secure connections with local farmers to guarantee that they can supply at a consistent price.”

Although she’s keenly aware that every eatery fights for eaters’ food dollars, Maderia is trying to look on the bright side: “I need to clearly differentiate my business from their business. This is a great opportunity to check in with my customers, and to continue to use my business as an expression of my life’s work.”