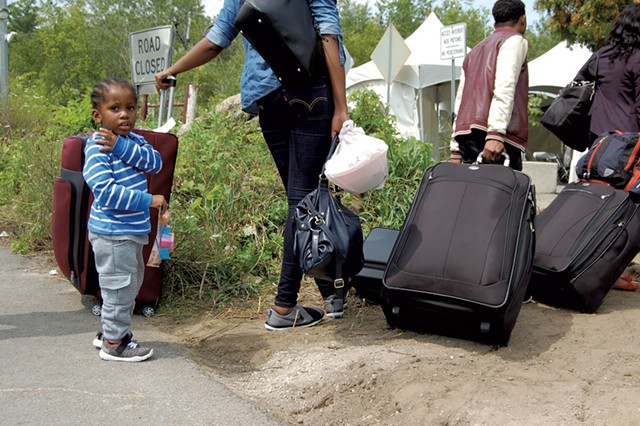 There’s one reason to take a taxi to the end of Roxham Road in Champlain, N.Y.: the U.S.-Canadian border. The remote spot, 30 miles south of Montréal, has become a conduit for people fleeing U.S. immigration crackdowns announced by President Donald Trump.

The exodus to Canada started last winter, when Trump tried to institute a travel ban on six mainly Muslim countries. But last Friday, most of those seeking refuge were Haitians. The current administration wants to end a program that has allowed them to live in the U.S. since an earthquake devastated their home country in 2010. Their “temporary protected status” was recently extended six months — until January.

“We’re going to a beautiful country,” exclaimed a girl who appeared to be about 10 years old, as she hopped out of the taxi — one of several delivering families of immigrants that day. Speaking French, a Haitian man who accompanied her and several other people told a Canadian reporter that the family had travelled from California to Plattsburgh International Airport, where they hired the taxi.
In interviews with French-speaking members of the Québec media, the Haitians said they had grown concerned about Trump’s policies, and believed that they would be granted asylum in Canada. But Canadian authorities have said there is no guarantee that everyone will be allowed to stay. Migrants will have to demonstrate concrete reasons they cannot be returned to Haiti.
But the crossings show no sign of abating. The Canadian Broadcast Corporation reported last week that up to 250 people are now crossing the border at Roxham Road each day.

Last winter, migrants were met by one or two Royal Canadian Mounted Police officers at the end of the road, in the Québec town of Saint-Bernard-de-Lacolle.
But since then, Canadian authorities have set up large, wedding-style tents, with several dozen folding chairs set up inside, and deployed a large, round-the-clock team on their side of the border. From there, migrants are transported to large refugee camp set up last week by the Canadian military that held 1,200 asylum seekers. Another temporary shelter has been established 30 miles north, in Montreal’s Olympic Stadium.

At least four families, including one from Syria, crossed on Friday afternoon. They struggled across the border carrying large suitcases, jam-packed duffel bags, Tupperware containers of food, strollers and infants in car seats.
Canadian cops told the arrivals to halt, and explained that they would be breaking the law if they proceeded into the country. The people said they understood, and then stepped forward.

“It’s a safe place,” a Canadian cop told one of the arrivals, a man who said he was from Syria. “You don’t have to fear Canadian authorities. There’s a process you have to go through, but you can relax, all right?”

Vermonters Priscilla Maddocks and Wendy Doane were also on the scene. They had come to hand out water, coffee and snacks.

“We want these families to remember an act of kindness before they go into Canada from this country,” Maddocks, a South Hero resident, said.

“We don’t want their lasting memory of America to be fear,” said Doane, who is from Westford. “This is not my America.”