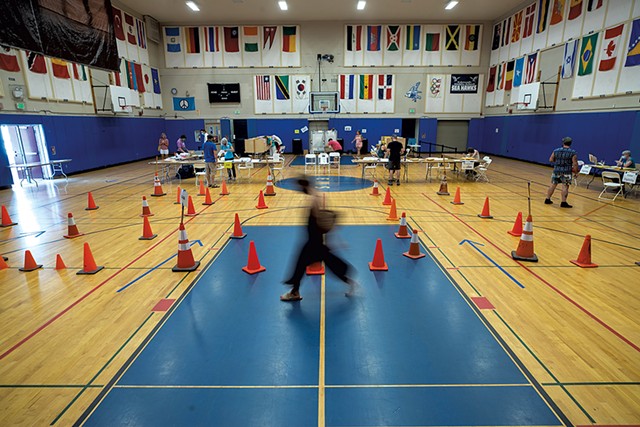 Vermonters planning to cast their ballots the old-fashioned way — in person, at their local polling place — may be wondering what to expect on November 3.

Will polling places be mobbed because of heightened interest in the presidential election — or ghost towns due to the runaway popularity of advance voting? And will people suspicious of potential voting shenanigans pack polling places as observers?

President Donald Trump hopes the answer to the latter question is in the affirmative. He has called for an "army" of supporters to "go to the polls and watch very closely." At one campaign stop, Trump told a crowd: "Be poll watchers when you go. Watch all the thieving and stealing and robbing they do."

On Tuesday he took to Twitter again and demanded, "Philadelpiha [sic] MUST HAVE POLLWATCHERS!" His tweet singled out a city with the third highest Black population in the nation, in a key battleground state.

Some Vermont elections officials worry that such rhetoric may cause people to believe incorrectly that they can just show up to monitor voting in any way they please.

"My concern is, this call that has gone out makes it sound like anyone and everyone can be a poll watcher," said Barre City Clerk Carol Dawes, who chairs the Vermont Municipal Clerks and Treasurers Association's Legislative Committee.

That's not quite true.

To ensure transparency, members of the public can observe polling places, but strict rules apply. They must stay in a specific viewing area, cannot interfere with voters or poll workers, and cannot campaign.

The number allowed depends on the building capacity and other factors, including social-distancing requirements.

"Everyone is so on edge this year, so amped up, that I'm concerned about people not being civil." Barre City Clerk Carol Dawes tweet this

In addition, political parties and independent candidates are allowed to send monitors to observe voting and to challenge a voter's status. But that process is governed by state election law, which limits the number of poll watchers to two per political party.

Dawes worries that things could get dicey if multiple people show up wanting to be poll watchers and she has to turn them away because she is at capacity or for some other reason.

"Everyone is so on edge this year, so amped up, that I'm concerned about people not being civil," Dawes said. "If I say, 'Sorry, our poll watchers are already full,' I can imagine that in the current climate, somebody's going to think I'm doing something nefarious."

Poll watchers representing political parties typically bring a town's voter checklist and mark off voters as they arrive. They are free to use that information to encourage people who haven't voted to show up, said St. Johnsbury Town Clerk Stacy Jewell.

But the restrictions are significant and will likely limit interest in the activity, Jewell said: "They just get to sit there and listen. That's it."

And this year, with the social-distancing requirements, Jewell said, she doesn't know how she would accommodate multiple poll watchers, especially if doing so would leave voters standing out in the cold.

To address clerks' concerns, Secretary of State Jim Condos issued a directive on Monday saying that anyone who wants to represent a party as a poll watcher this year must inform clerks by Friday. 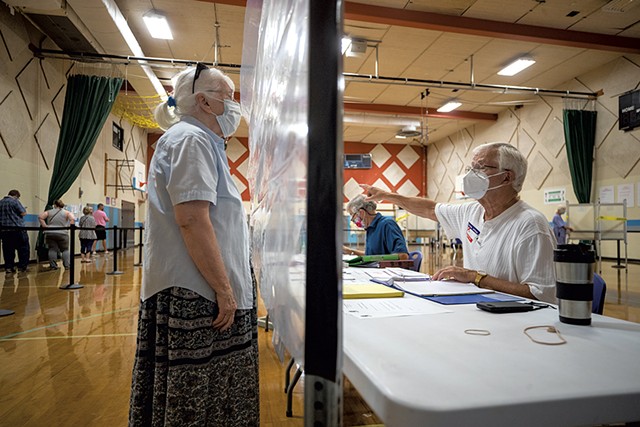 Vermont Democratic Party officials said they have no intention of sending observers this year but instead are providing a hotline that people can call if they have concerns. The party will have staff on hand to answer questions, document issues and, if necessary, offer legal support to voters facing obstacles. Voters can also take up problems with their town clerk.

Montpelier attorney Anthony Iarrapino has manned the Democratic hotline in recent years and said issues that arise are usually minor mix-ups, as opposed to voter suppression. Nevertheless, he's pleased that elections officials have their guard up.

"The kind of organized voter intimidation that worries people hasn't been an issue, but that doesn't mean it won't materialize in isolated pockets," Iarrapino said.

VTGOP chair Deb Billado has, like Trump, railed against Condos' decision to send mail-in ballots to all registered, active voters. But unlike Trump, she has not called publicly for aggressive monitoring of the polls. Billado said the party was "working on a poll-watching plan" with county party chairs. She did not respond to requests for additional details.

Orleans County GOP chair Chet Greenwood said he was aware of no such plans.

The militaristic overtones of Trump's call for an "army" to "protect" the vote is alarming, said Rep. Tom Stevens (D-Waterbury). It calls to mind images of militia members in Michigan who brought assault-style rifles into the Statehouse to protest the governor's extension of COVID-19 restrictions.

"It's easy for me to imagine that the people who would be most likely to take up his charge would not be Republican operatives but would be people who are interested in really making people uncomfortable," Stevens said

State officials said they won't have it.

"It is a crime to intimidate or interfere with a Vermonter's right to vote at the polls," Donovan said. "The Attorney General's Office will enforce the laws as necessary to ensure that all Vermonters are able to peacefully exercise their fundamental right to vote without disruption."

Police will not be stationed at polling places, as they have been in some large cities elsewhere during early voting.

"Please know that because of this talk and the heated political environment, we have been having conversations with the state and local law enforcement to stand by to assist where needed," Will Senning, the state's director of elections, told clerks last week.

Many voters won't be at the polls. As of Monday, 204,628 people had returned ballots by mail, well above the previous record of 95,203, set in 2016. The number is expected to grow substantially by Election Day.

"We still expect quite a few people to come in in person and vote," Jewell.

Vermont's highest-ever general election turnout was 325,046, in 2008. To top that, as many expect will happen, tens of thousands of voters will have to turn out on November 3.

For those who want the satisfaction of physically delivering their ballots but don't care to enter a building, 173 towns have some kind of secure 24-7 drop boxes. Burlington, for instance, has three — at city hall; at the Department of Public Works, at 645 Pine Street; and behind Fire Station No. 2, at 132 North Avenue. The full list is available at the secretary of state's website, sos.vermont.gov.

Election officials say that while they can't prepare for every possibility, they've taken steps to ensure voting in person this year will be as safe, smooth and peaceful as possible.

"The right to vote is sacred, enshrined in our Constitution," Condos said in a statement. "I believe all Vermonters will conduct the voting process with civility, as is our Vermont tradition, rather than echoing the divisiveness we are hearing nationally."

Huntington Town Clerk Heidi Racht isn't too worried about disruptions. In her 15 years in office, she's only seen one poll watcher, a young man working for Sen. Bernie Sanders' (I-Vt.) 2012 reelection campaign, and he was very respectful.

"He helped us take down the polling booths while we finished the election," she said, "and then joined us for supper before leaving."