Officials Lay the Groundwork for Replacing the Busy Burlington-Winooski Bridge

Crossing the bridge that connects Burlington and Winooski isn't a pleasant experience for anyone. Squeezed into two narrow travel lanes in each direction, motorists are at risk of sideswipe crashes. Pedestrians must pick their way across a crumbling sidewalk with little buffer from speeding traffic; cyclists have no lane of their own.

The deficiencies of the Winooski River Bridge, one of the state's most heavily traveled spans, are well known. Thanks to new federal spending, there's now a plan to address the problems, and relatively soon.

Earlier this month, the Vermont Agency of Transportation won a $24.8 million federal grant to help rebuild the bridge with wider travel lanes and a dedicated pedestrian and bike path. The two cities, which jointly own the bridge, and state government will chip in toward the total $31 million cost.

Closing the bridge would of course create a traffic nightmare, so state officials are proposing a construction method that would reduce the impact on travelers. Crews would build the new bridge beside the existing one and slide it into place when complete. The technique is common elsewhere but has been used just twice in Vermont.

"Let's be honest: Every day that we disrupt traffic on that bridge is critical when you have 25,000 cars a day going across it," Robert White, project delivery bureau director at VTrans, said. "We will have to deliver this project quickly."

Spanning the Winooski River, the 352-foot-long bridge is the only thoroughfare that directly connects the Queen and Onion cities. On the Burlington side, the bridge empties into the busy three-way intersection of Colchester and Riverside avenues and Mill Street, a dead-end stretch with a handful of businesses. On the Winooski side, the bridge is an entry and exit point to the roundabout that connects Routes 2 and 7 with Route 15 in the center of the city's downtown.

The bridge was built in 1928 to replace one that was destroyed in a historic flood the year before. It's had a patchwork of repairs since, including a substantial rehab in the mid-1990s. The last state inspection report, in May 2021, noted that the sidewalks and travel deck could use repair but rated the bridge in fair condition, meaning it's structurally sound but has some deficiencies.

The bigger issue is that the bridge doesn't meet the needs of those who use it. The state estimates that, in warmer months, more than 500 cyclists and pedestrians cross the bridge daily — but without a safe way of doing so. Car crashes, or even repaving work, can disrupt traffic for hours, particularly during rush hour. 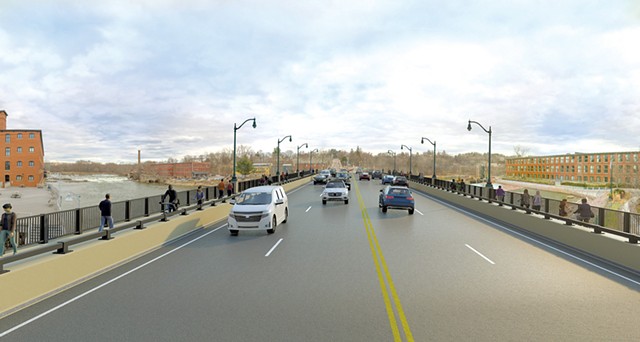 Officials have discussed replacing the bridge for years, but a lack of funding stalled any progress. This year, though, VTrans won a highly competitive grant from the $2.2 billion RAISE program, which had more money to give out because of the recently enacted federal infrastructure law. The program also awarded the City of St. Albans $7.7 million for a handful of transportation projects, while the Chittenden County Regional Planning Commission received $2.1 million to help 12 communities develop zoning to encourage denser housing development.

White said the bridge award is "huge for the state of Vermont."

Officials aren't spending too much time celebrating, though. To avoid the risk of grant funds expiring, White needs to assemble a project team by the end of this year and begin design work in 2023. Obtaining a slew of permits, including a lengthy federal environmental review, comes next. Construction would begin in the spring of 2027.

Typically, construction would close the bridge for several years, forcing commuters to detour by way of Interstate 89 or Malletts Bay in Colchester. The change would add a cumulative 50,000 miles and 2,100 hours to Vermonters' daily commutes, VTrans estimates.

The so-called "lateral slide" method, however, would close the route for just six weeks. But it would require coordination: The state needs easements from some private property owners, though most of the work would be on city-owned land. A portion of the deck at Winooski's River Walk would have to be removed and rebuilt after construction, and a staging area would take up some parking spaces on Mill Street.

Vermont's two other lateral slide projects have been far less complex. The first one, in 2015, replaced two bridges on Interstate 91 in Hartford in just two weekends. Because the structures crossed land, not water, crews could work on the new bridges underneath the existing ones. The other project was in Cavendish, a rural town in Windsor County with far less traffic.

Another option would be to build a temporary bridge beside the old one so crews could replace the aging span without any closures. A similar project is nearing completion on the drawbridge between Grand Isle and North Hero. The Winooski bridge could possibly be built the same way, but VTrans has some concerns about rerouting traffic in an area with limited space.

Highway planners hope a concept that minimizes the disruption will pan out. Along with the headache for commuters, extended bridge closures would detour traffic from downtown Winooski with its popular bars and restaurants.

"Construction projects, and particularly something like this that's such a big artery, are really challenging," Winooski Mayor Kristine Lott said. "You'd have more people going around the city."

Burlington Mayor Miro Weinberger agreed that traffic concerns are paramount but said he expects "a lot of community engagement" before construction begins.

"It's definitely an area that's been in need of improvement for a long time." Winooski Mayor Kristine Lott tweet this

Meantime, each municipality has to find $1.5 million to pay its share of the project. Weinberger didn't have a funding source in mind but suggested that long-term borrowing may be off the table. Last week, Burlington city councilors approved a bond of up to $165 million for a new high school, which, if passed by voters in November, would max out the city and school district's shared bonding capacity. The city has already had to delay other capital projects, including a revamp of the aging Memorial Auditorium, to cover the school bond.

Despite this, Weinberger said he's confident the city will come up with the funds.

The Winooski mayor was more concerned. Lott said $1.5 million is a "huge chunk of change" to come up with, noting that before the RAISE grant came along, officials thought that replacing the bridge was 10 to 20 years away.

Still, Lott sees some options. Unlike its neighbor to the south, Winooski can take on more debt and could possibly leverage leftover coronavirus relief funds for the project, she said. The city may also ask the state for help, Lott said, noting that Winooski residents are among the lowest-income in Chittenden County.

"This project is beneficial to an entire region," she said. "It's a lot of burden to be putting on a small population like ours."

Winooski will begin delving into the numbers during budget discussions this fall. Despite the quick pivot, Lott said she's pleased the long-awaited project is finally on deck.

"It's definitely an area that's been in need of improvement for a long time," she said. "There's already a lot of excitement."