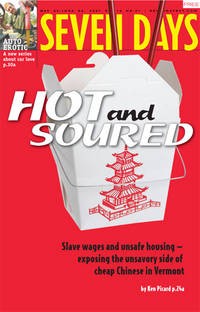 ESSEX JUNCTION — Last week Seven Days reported on a group of Chinese restaurant workers who are living in an overcrowded and unsanitary boarding house in Essex Junction and claim to be working for below-legal wages. Reactions to the story ("Hot and Soured", 5/31/07) were mixed. While some officials took a “keen interest” in employees’ allegations of possible minimum-wage violations, others expressed uncertainty about what, if anything, they could do to address the workers’ housing predicament.

The Vermont Department of Labor said it wants to speak to any current or former employees of six Chinese restaurants in Chittenden County who say they were underpaid for their work and/or were improperly compensated for the room and board provided by their employers, Sheun Lai Poon and Yun Poon.

“We’re keenly interested in your article,” said Steve Freihofner, associate counsel for the Vermont Department of Labor. “The front-page reference to ‘slave wages’ was especially attention-getting.”

Freihofner was referring to the cover story titled “Hot and Soured: Slave wages and unsafe housing — exposing the unsavory side of cheap Chinese in Vermont” — in which some half-dozen restaurant workers, who speak little to no English, allege that they work only for tips and have a percentage of their daily earnings skimmed by management. Yun Poon has denied those allegations, and Seven Days could not independently verify their accuracy.

Freihofner did not know whether minimum-wage law violations have taken place, nor could he confirm that the state has opened an investigation into the Poons’ six restaurants: Orchid Restaurant in South Burlington; East Orchid in Williston; Ming’s in Essex, Colchester and Burlington; and Fortune Cookie in the University Mall in South Burlington. The labor attorney did ask anyone interviewed for that story who believes he or she has been improperly paid to contact him, or else file a wage claim on the Vermont Department of Labor website. Seven Days does not disclose the names of confidential sources, but Freihofner’s request was conveyed to several of those individuals.

Within hours of the story’s publication, other people contacted Seven Days claiming that they had worked at one of the six restaurants under similar circumstances; one said he’s contacted the DOL.

Official reactions to the workers’ housing situation in Essex Junction was more muted. Bob Patterson is the Williston regional manager of the Department of Public Safety’s Division of Fire Safety. When asked if there were plans to conduct a fire inspection of the boarding houses at 2 Park Terrace, Patterson replied, “No, I don’t know that there’s any need to . . . If we had an inkling that there were smoke detectors that were not working properly or some other violations, particularly what we call ‘imminent hazard,’ we would certainly be in there in a very short time.”

But, as last week’s article clearly indicated, the smoke detectors at 2 Park Terrace did not appear to be outfitted with working batteries; additionally, no fire extinguishers, carbon monoxide detectors or sprinklers were seen in the house during several visits over a three-month period. Seven Days did not enter a second employees’ boarding house at 9-11 Park Street.

Patterson confirmed that both boarding houses qualify as “public buildings,” making them subject to more stringent life-safety codes and periodic fire inspections. Vermont building code also prohibits the use of padlocks and lock hasps on bedroom doors, which can prevent an escape in the event of a fire. Several bedrooms in 2 Park Terrace had such locks and hasps.

“I am glad you called,” Patterson noted, after being informed of these conditions. “These are the kind of places we want to be into.”

But Patterson also pointed out that his office can do nothing to address the issue of overcrowding. As several residents confirmed in last week’s story, as many as 25 individuals are or were living at 2 Park Street, some in small bedrooms with six bunks to a room. According to Patterson, housing six or more unrelated people under one roof is not a building-code violation, though it is a zoning violation.

Jeff Arango is development director of the Village of Essex Junction. He said he’s been aware “for some time” that restaurant employees are living in two boarding houses, including some in a building zoned for commercial, not residential, use. However, he said the Village has been working with the property owner — Sheun Lai Poon’s Park Street Holding Company — to redevelop the site into a $4.5 million, 91-room LaQuinta Hotel. If that application were to be approved, Arango said, all the zoning violations would be resolved, since both boarding houses would be torn down.

“That’s what’s troubling to me,” Arango continued. “At the same time you’re trying to work on this relatively bold [hotel] proposal, which could be a good thing for the village, you’re dealing with someone who has a horrible track record.”

He emphasized that the owner’s “horrible track record” on building-code violations cannot simply scuttle the deal, though the Village may ask for certain assurances and guarantees from whoever ultimately manages the hotel.

“You’re hitting on the difficult situation I’m in. We’ve wanted a hotel in downtown Essex Junction for a long time,” Arango added. “But that doesn’t mean we’re willing to accept anything.”