Yep, It's Still Hard to Buy a Home Near Burlington 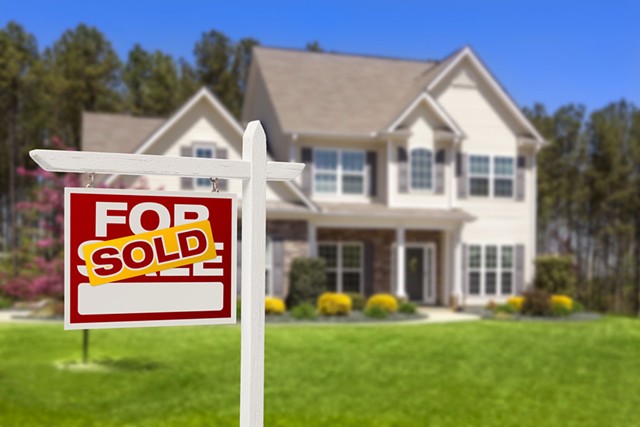 Nic and Amy Anderson loved their 800-square-foot house in South Burlington, but once their two kids reached school age, they needed more space and a second bathroom.

The one-car family hoped to find a place under $300,000 within the school district and biking distance from grocery stores and Champlain College. That's where Nic works as the coordinator of sustainable transportation and, aptly, commutes by bike all year long.

But so few homes were available — and any listings sold so quickly — that the Andersons even offered $4,000 more than the asking price on a Shelburne house. They lost that bidding war and one for a different home. Another seller told them not to bother looking, because so many potential buyers already had expressed interest.

Meanwhile, the bungalow near Burlington International Airport that the Andersons had bought eight years ago for $177,000 got multiple offers and sold in two days.

That's when the family's real estate agent sent postcards to homeowners in their target area, between Hinesburg Road and Dorset Street, asking if any would consider selling. A couple in the midst of a divorce responded and, a few weeks later, signed a contract to sell their four-bedroom, two-bathroom house for just under $300,000. The Andersons expect to close on the purchase, and the sale of their place, at the end of June.

"It was a challenging process," Nic Anderson says now. "It's just super stressful that there's not anything out there to look at. If you say, 'I want to be in this neighborhood,' then you might wait six months."

It's nothing new that the housing market in Chittenden County is tough. But real estate experts say the disparity between high demand and low supply is unusually severe right now, particularly for home buyers looking to spend $200,000 to $400,000.

"Under half a million [dollars] is as tight as I've seen it in the past 20 years," says Steve Lipkin, the Andersons' seasoned agent with Coldwell Banker Hickok & Boardman Realty.

As of April, the number of homes for sale countywide has dropped more than 24 percent from the same month in 2016 — from 671 to 508, according to reports that Trendgraphix, a company that compiles multiple listings service and market data, provides to Four Seasons Sotheby's International Realty.

In Burlington, the number of single-family homes for sale remains drastically low but largely unchanged from a year ago: 41 available properties in April, compared with 43 last year. The lack of inventory frustrates many who hope to buy in the city.

While supply fails to meet demand, prices are climbing in Burlington. The average price of homes sold jumped nearly 37 percent in April over the previous year — to $392,000.

Average prices can tip sharply upward in a given month, as the result of one very expensive home sale. By contrast, the median price is the middle point of all home sales, meaning that an equal number of properties sold for more and less. That median price — $388,000 — in Burlington was also up 35 percent in April from a year prior.

In most of Chittenden County, especially Burlington, "It's so hard to find anything under $250,000 that's not a condo," says Staige Davis, CEO of Sotheby's, based in South Burlington.

The situation is similar but not quite as dramatic around the rest of the state. The number of residences for sale dropped more than 18 percent from a year ago — from 7,324 to 5,963 in April. The average year-over-year price of homes stayed the same, at $231,000.

The exception to the tight-supply trend in most of Vermont is homes at the luxury end of the market — those priced at $1 million or more. At this level, there are more houses than buyers. Those listed in Chittenden County sat longer before selling — 145 days on average in April — compared with 49 days for homes costing $299,999 or less and 75 days for those in the $300,000 to $599,999 range.

The recession certainly made many home buyers more wary of taking on a bigger mortgage than they could handle. And limited supply is preventing some from putting their existing homes on the market, fearing that it will be too hard to upgrade to something else.

Not surprisingly, Davis notes, "There's a lot of renovation going on. People are staying in their homes."

That didn't stop the Andersons from making a move, but they immediately recognized that the market had changed since they bought their first house in 2009. "It was relatively easy, actually," Nic says of that purchase. "We didn't really need to shop around too much, but there was definitely plenty to look at."

Clearly, in this market, home buyers have to temper their expectations. They might have to boost the amount they're willing to spend to get what they want or compromise on the details to match what they can afford.

Or they can look outside of Chittenden County to get more bang for their buck. In the nearest communities, it's still challenging to find a great house at a reasonable price. But, Lipkin points out, buyers who are willing to drive a little farther from Burlington can often find decent deals in Franklin County and can stay close to Interstate 89 for commuting. While inventory in that county fell 20 percent from April 2016, average sale prices dipped almost 5 percent, to $194,000; the median sale price fell 13.5 percent, to $186,000. The Franklin County market just isn't as hot, probably because many buyers are less interested in living farther from Chittenden County. If demand starts to pick up, prices will likely follow.

Tight markets require drastic and creative measures. The Andersons weren't the first buyers who prompted Lipkin to pursue would-be sellers about offering their homes. He has tried the direct-mail approach a few times in recent years, particularly for people interested in specific neighborhoods.

"You've gotta think outside of the box in this market, if you've got a buyer," he says. In the Andersons' case, several homeowners responded about possibly selling.

What buyers really need are more choices. Multiple construction projects in and around Burlington propose to bring as many as 2,000 new homes onto the market, according to Davis' count. But they won't provide much benefit to buyers anytime soon, he says.

For one thing, development moves slowly in Vermont, the result of a detailed and extensive permitting process. "They're not all ready for prime time right now," Davis says of the projects. "We barely make incremental progress."

Also, many of the developments closest to the city center — such as the proposed renovation of Burlington Town Center — include more apartments for rent than condominiums for purchase. Easing the rental crunch in and around the city will help keep apartments affordable, thus encouraging more tenants to rent longer and stay out of the buying market. And that could help reduce demand for single-family homes, balancing out supply.

Still, Lipkin doesn't give local home buyers much reason for optimism: "I think we're going to see more of the same for the next year or so," he says.

These tables compare availability, average and median pricing of homes in five Vermont counties, plus statewide totals. All numbers compare April 2016 to April 2017 for single-family properties, including condominiums and mobile homes.