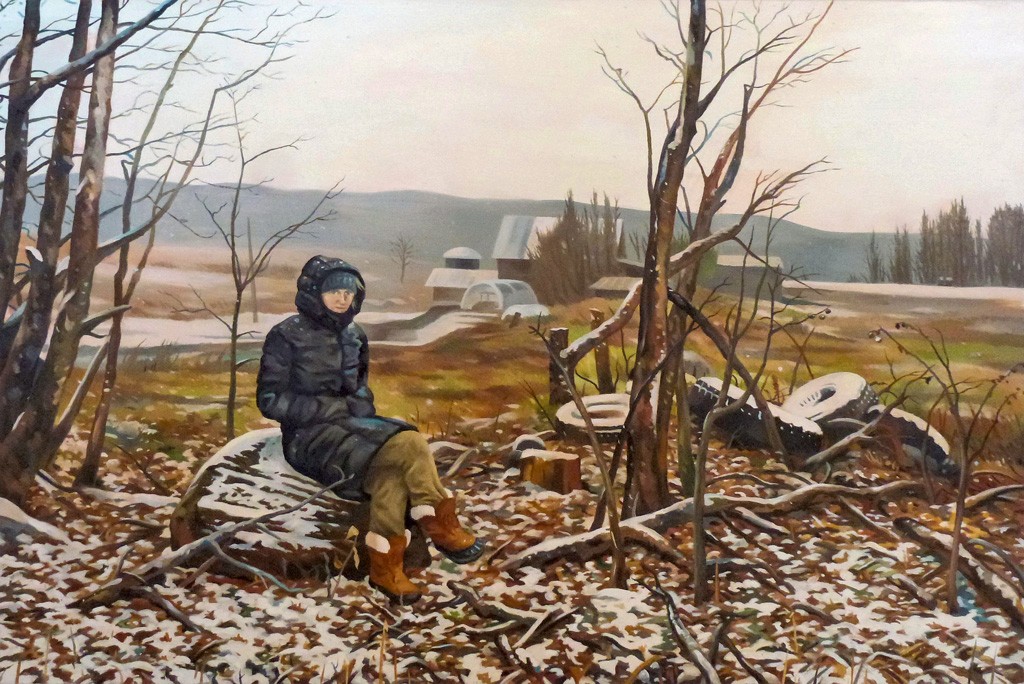 A very, very long time ago, some early human had the idea of representing the natural world, rather than just being in it. Whether that first gesture was stick figure or symbol, we can't know for sure, but it was surely evolutionary. The artwork of ensuing civilizations suggests that the desire — perhaps need — to contemplate and depict the land is stamped in our DNA.

Realistic landscape paintings are still popular, and the relatively unspoiled environs of Vermont continue to inspire plein-air painters. But in contemporary times, some artists have been more inclined to illustrate, and protest, the unfortunate consequences of destructive human behavior on this earth. The 2015 iteration of the multi-site exhibit "Of Land & Local," which recently opened, represents this spectrum and many points of interests in between.

The third annual "statewide exploration of contemporary art," as Burlington City Arts calls it, is intended to "initiate a dialog about issues surrounding art and the environment that relates to the Vermont landscape." For this year's show, curated by BCA's dj Hellerman, 14 artists created work during outdoor residencies at state parks, as well as at Shelburne Farms and the Marsh-Billings-Rockefeller National Historical Park in Woodstock. The results are currently on view at the BCA Center in Burlington (four artists) and the Shelburne Farms Coach Barn (10 artists).

As noted, these works span a variety of mediums and styles. Though each participating artist presented initial proposals for his or her work, Hellerman allowed them latitude for altering projects midstream, said one of the artists at a panel discussion last Saturday at the Coach Barn. Sometimes nature just doesn't cooperate.

Wendy Copp and Susan Raber Bray, for example, admitted that they wrestled with an installation of woven grape vines and other botanicals on a windy knoll at Shelburne Farms, and their structure kept changing. Despite these challenges, or perhaps because of them, the sculptural forms the two women created over the summer — using vines, willow branches, leaves and apple tree prunings — are among the most engaging and successful in the exhibit. Whether crafting figurative works — a chair-like form — or abstract ones on the floor or wall, Copp and Bray quite literally related to the exhibit's theme.

So did sculptor Angelo Arnold. But his "installation" added to the Shelburne Farms grounds by subtracting. Known for his humorously anthropomorphic furniture-based works, Arnold trimmed a straight line out of a row of thick buckthorn bushes near the Coach Barn. So subtle is the cut that visitors have to know it's there to notice it. In keeping with the ethos of earth art, what was removed will grow back; buckthorn is a pernicious invasive.

Arnold's creation evokes the adage that there are no straight lines in nature; only humans make them — from neat crop rows to highways to landing strips. Last Saturday, Arnold noted that his piece reflects an interest in landscape architecture, but also that, over the summer, he "fell in love with" the far less manicured forms of wasps' nests.

Jeroen Jongeleen also trades in lines, even if they sometimes go in a circle. The Dutch artist puts unusually intense physicality into his work: He runs the course of a precharted design in, say, a field — and invites others to join him — until the wearing away of grass reveals a pattern. Aerial, drone-assisted photos of his work are on view at both BCA and the Coach Barn.

Jongeleen is interested in the use of public spaces and how humans leave traces on the earth. But he chooses to leave ones that, like that buckthorn slice, will disappear. His work speaks eloquently to patterns of human behavior, from walkers wearing down diagonal shortcuts between right-angled sidewalks to builders "leaving traces that will remain for the next 5,000 years," as he put it at the BCA exhibit reception.

Rebecca Schwarz takes the idea of the human footprint in another direction. Her installation at the Coach Barn consists of white and clear plastic waste forming a suspended, illuminated "chandelier" and, on the floor beneath it, a circle of other debris. As Schwarz admitted in the panel discussion last week, she finds a certain beauty in these objects, even though the sculpture speaks to rampant consumerism and its long-lasting impact on the planet.

All of the artists encountered random visitors during their residencies this summer, but Schwarz, who coordinates BCA's Art From the Heart program for hospitalized children and their caregivers, proactively conducted workshops at Button Bay State Park in Vergennes. "For me, it was about what we throw away," she said Saturday. "Kids had this gut understanding of how messed up it is." Destroying the earth is a depressing topic, Schwarz acknowledged. Her way around hopelessness was to encourage her young students to "grow up and find better solutions."

Two curious choices for "Of Land & Local" are on view at the BCA Center: The works of Stella Marrs and Olga Koumoundouros are engaging but seem more concerned with feminism and labor/economy, respectively. Each of the other dozen participants, however, found his or her way into the exhibit's theme with the thoughtful idiosyncrasy expected of artists.

Now it remains to viewers to discover how, or whether, artists' interpretations of the land influence their own ideas. Those who head to Shelburne Farms for a look should be sure also to stop in at the Shelburne Museum's current "Eyes on the Land" exhibit. It is conceptually and aesthetically — though not officially — of the same mind.