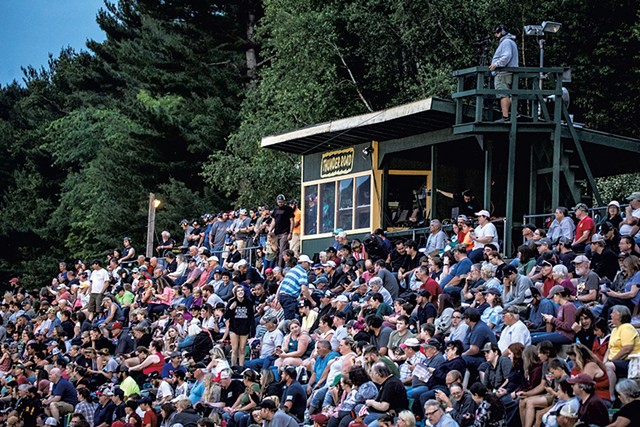 Every Thursday night between June and August, like moths flocking around football stadium lights, a few thousand people swarm the slopes overlooking the Thunder Road International Speedbowl to singe themselves on the spectacle of barely avoided calamity.

The cars — and their drivers, with folk-ballad names such as Neal "Tetanus" Foster and Kaiden "Tropical Storm" Fisher — are usually the main attractions at the Barre track, which has held races on its quarter-mile paved speedway since NASCAR Hall of Fame broadcaster and WDEV Radio owner Ken Squier founded it in 1960.

Thunder Road isn't a catwalk for pretentious European imports; here, the American muscle car, along with a decidedly everyman ethos, reigns supreme. Last summer, pandemic restrictions forced track officials to limit attendance to roughly one-tenth of its 9,500-person seating capacity, a considerable amount of which is BYO lawn chair. But this season, with the virus in retreat, crowds have returned, along with the thrill of mass spectatorship.

On the Thursday before the Fourth of July, when I went to Thunder Road to mainline this still-surreal feeling of normalcy, the parking area was nearly full even before the official 7 p.m. start time, and the line at the concession stand by the main entrance had already doubled back on itself.

The night had an aura of a massive family reunion. The price of admission is $15 per person and less for children 12 and under, which means that children abound. In the mosaic of portable chairs covering the balding hillsides, small boys with blond buzz cuts and popsicle-stained mouths sprinted around in their tiny Crocs, pretending to be cars; young women held fat-ankled babies with air-traffic-controller headphones over their ears to muffle the roar of the engines.

For all of that ambient kid adrenaline, the mood among the thousand or so spectators felt curiously subdued. As the cars lapped around the track like huge metal bees trapped in a jar, people stared straight ahead with rapt, glazed looks. The roar of the engines drowned out virtually all thought; except for a few odd whoops, hardly anyone cheered.

At one point, a guy sitting near me held his sandwich halfway up to his mouth for several minutes, mayo trickling down his wrist, without taking a bite. After about an hour, I had inhaled so much burning fuel and rubber that I felt like, if I held my breath long enough, I would simply float off the ground.

In this pleasantly bewildered state, my boyfriend and I wandered over to the beer tent, situated in a fenced-off area with a banner proclaiming itself "Widowmaker Gardens," to see about some tallboys. My boyfriend ordered a Budweiser. "Pure diesel?" the guy working the tent asked. My boyfriend nodded. "Good boy," said tent guy. 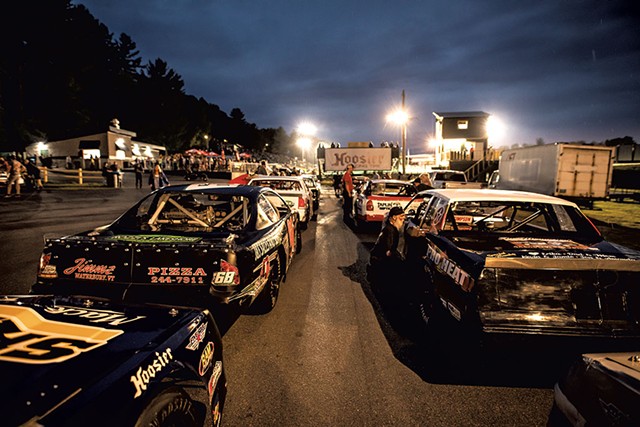 As we sipped our Bud at a picnic table, a car spun out on the track and landed almost perpendicular to the other cars, skirting a collision by a hair's breadth. I waited for the collective gasp, but there was no collective reaction whatsoever; a couple of seconds later, the driver got back in his lane and continued on. (According to track officials, there has never been a fatal crash at Thunder Road, but the canon of near misses is rich; several years ago, at the annual Run-What-U-Brung spectator race, someone flipped his car in mid-air, landed right side up and went on to win first place.)

In the bruised-peach light of sunset, we headed to the far side of the spectator area, where you can watch the pit crews scurrying around between races. "I heard you have to pay $35 to get in there," a boy sitting alone at a picnic table told me wistfully. He was playing with two Matchbox cars, racing them along the table and up and down his arms. A Thunder Road employee stationed at the edge of the pit confirmed that what the boy had heard was true: For the price of seven Buds, anyone can bask in the frisson of high-stakes automotive tinkering.

One of the qualifying races had just ended, and the announcer was introducing the winner, Kaiden Fisher of Shelburne, as "No. 1, 2, 3 and 4 on the all-time youngest wins list." Fisher, it turns out, is 13, not even old enough to legally drive himself home in his Ford Mustang.

That night, Gov. Phil Scott, a Thunder Road legend long before he held Vermont's highest office, made his second appearance of the season in his green-and-black Chevrolet Impala. Over the last three decades, Scott has amassed more victories than any other driver in his category, the Maplewood/Irving Oil Late Model Division. (In the Thunder Road universe, everything has a proud business sponsor, even the annual Calkins Portable Toilets Port-a-Potty Grand Prix.)

Scott took last season off — he had more pressing business, like responding to a global pandemic — but this year he has returned to the track, with his trademark lack of pomp. Last Thursday night, the announcer never once referred to the driver of car No. 14 as "Gov." Scott; here, he's just Phil Scott, a guy doing laps.

In the final heat of the evening, Scott raced politely, maneuvering around his opponents with such decorum that you could almost hear him excusing himself as he nosed past one car after another. In the end, he finished in 10th place and made no public address whatsoever, not even to commemorate Vermont's hard-won emergence from the pandemic or the Fourth of July.

Not that there was any shortage of patriotism on display. During the national anthem before the postrace fireworks show, the acme of this monumental ode to combustion, a guy behind me barked at another guy, "Take off your hat!"

After the requisite solemnities, the pyrotechnics began, launched from two pallets in the middle of the racetrack, accompanied by a wan instrumental rendition of "America the Beautiful." As everyone gawked at the sky, a couple near us left the stands with their infant, asleep in his little earmuffs.